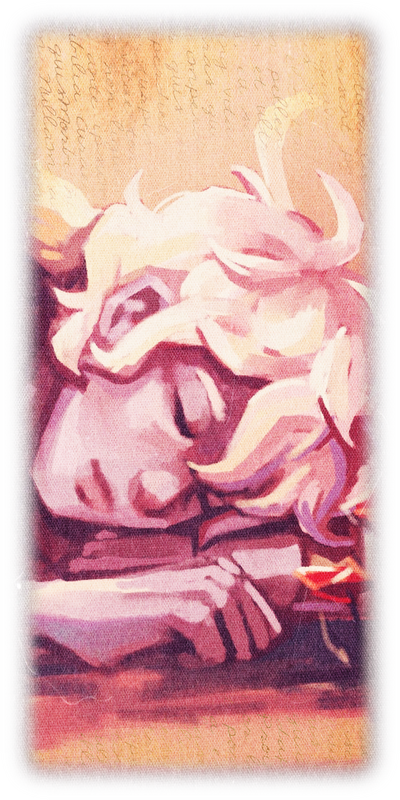 Survived 2021
You've completed the Christmas Event of 2021 and qualified for the last reward, by partisan you are awarded this fancy badge!
Ryo : 47600

Murata was slated to arrive soon.

He labeled the squirming in his gut anticipation. Up a flight of squeaky wooden stairs was the kage office temporarily commandeered by Chizu Hyuuga. He wasn't quite sure what to think of her- she was by turns fierce and gentle, sharp as a scalpel and kindly. The candy was good, too- but there was an underlying threat that marked her as a military leader. Not just anyone could take charge of the island country war machine, after all.

And here he was, package in hand, asked to deliver something to the one person he probably was the most intimidated by in all his time as a ninja. A plank creaked beneath his foot, and he briefly mused on the possibility of that being intentional- trespassers (and unobservant genin) would not know what the 'safe' steps were, and thus would be easier to... hear?

Goro liked to think he had leeway, though. He didn't have business in the office very often. He was pretty sure this'd be his second or third time in there, ever- the first being almost immediately after the move to the estate.

He wasn't entirely sure what he was delivering- a few seals decorated the paper, and he recognized one as some type of stasis. Something that could decay, maybe? Some weird experimental sample too delicate to work with at the hospital? He tried not to think about it. Maybe it was like, Jugo teeth or something.

In all honesty, he wasn't expecting the call, so he hoped his Goro-ness wouldn't be held against him. He was still wearing the canvas half-apron, a dark gray turtleneck, and nondescript black pants and boots he wasn't sure he remembered purchasing.

His fingers were still stained with ink, and his hair messy after nearly a couple weeks of not maintaining dye and staying up late re-applying some old seals in the ecology department. The top of the flight of stairs arrived all too quickly. It wouldn't surprise him if Chizu could hear his pulse through the door. He took in a steadying breath, raised his hand to knock-

and nearly jumped out of his skin when the door swung open of his own accord.

"Hiiiii!" he wasn't sure if it was a yell or a greeting. A blink and gentle slump of the shoulders, and he stepped in. "Um, here's the package you wanted, Lady Deputy!"

The door closed, and to his credit, he only feared for his life a little.