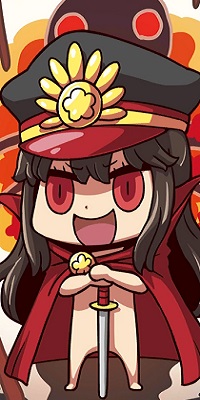 Keita was currently sitting in a waiting room at the Mizukage's estate, waiting. He knew that the Mizukage was always busy, and it would be a bit more so when talking about a new one. The new Mizukage, Murata, was a good person from all of the stories that Keita had heard about them, but Keita was unsure if this new Mizukage was going to be a more active and better Mizukage overall when thinking about the paperwork and the more administrative work they had to do. This was not really a question, however, as the new Mizukage would definitely be better at the administrative side of things than the previous one, as much as Keita admired Kizmaru, there were not really any good parts about his administrative skills. As he waited in the small but homely looking room, he sipped on some tea that a secretary had provided him, and he was simply sitting there smiling.

He was nice and calm, and he had no need to be in any sort of rush. He was willing to wait for as long as was needed, unless of course it was going to be over eight hours, as he might as well go ahead and reschedule this little meeting. He was only here to drop off a couple of items he had been working on and request a permission from the Mizukage, but he wanted to meet with them face to face, as he the scrolls in his possession were for the Mizukage’s eyes only, as they were something near and deer to him so he wanted to make sure they were handled correctly and with the utmost care. Sipping the tea and looking out the window at the wonderful scenery through the beads of rain water rolling down it was something that brought peace to Keita’s mind, and he thoroughly enjoyed just sitting here and relaxing, waiting.

Murata steps halfway out of her office with a creak of the old door, sharing murmured conversation with an elderly woman leaving the room. Keita will recognize her from the nearby waiting room as the longtime director of the hospital - Chizu Hyuuga, now the current Deputy Kage.

"Alright. I'll be there by noon. Call the Chuunin as well."

Chizu nods curtly to the haggard-looking Mizukage, lilac eyes sharp behind her glasses. She catches Keita's eye as she passes and offers him a respectful nod of acknowledgement before continuing, an ANBU moving shadowlike behind her, a bundle of scrolls and binders under one arm. Murata lingers after her and then looks to Keita as well, inviting him into the familiar office across the hall with a gesture.

"Sorry to keep you waiting," Murata says as she sits down. The window behind her is an impressionist smear of greys and blues, the lagoon half-obscured by rain and fog outside. The desk is cluttered with maps, scrawled notes, and coffee mugs, Murata's intake in intense competition with the estate's cleaning staff. "Yesterday was eventful."

Of course, she refers to the summit, the village buzzing with rumour since her return the previous evening. Murata sips her most-recent coffee, moving her scribbled appointment notes for the village's favourite ANBU on top of her pile of things to do. "What do you need?"

As Keita was calmly observing his surroundings and enjoying the tiny pitter patter sounds that were created by the rain hitting the window, his drifting mind was taken back to the present by someone entering the room. Keita stood up out of respect for the person that entered, and was happy that it was actually Murata, and not anyone else. He did not feel like he needed to talk to another person to explain himself, although he would if he had to. He was of course still completely loyal to Kiri, so there was no way that he would go against any orders, he was perfectly content with any inconveniences that would be thrown at him, he was just hoping that Murata was of the same mind as he was, thinking it was unnecessary.

So Keita immediately stood up and bowed towards Murata. “Greetings, Lord Mizukage.” Keita would cordially say before waiting for the permission to sit by the kage. This was more of a formality than anything else, but there was still a sequence to go through. Keita was very formal and traditional, so he felt like he needed to do this. After the formalities were out of the way, Murata apologized for keeping him waiting, and Keita was quick to dismiss this. “It is of course, nothing. I was not waiting for long regardless.” Murata then went on to say that the day before was quite eventful, and Keita nodded. He did not know exactly what happened during the so called ‘summit’ but there was obviously some big things that went down.

Keita was not here to ask about that though, and soon it was time for him to speak, after Murata asked what he needed. Keita pulled out a couple of scrolls that were brimming with a subtle but concentrated chakra signature, before placing them on the table in front of them. “Lord Mizukage, these are two copies of a secret art and jutsu for it that I have created in my time researching. It is very powerful in my opinion, and I wish to pass it on to the village, if I may.” Keita unfurled one of them to give to Murata, or perhaps they would have a secretary or helper bring it over to them, Keita was not sure what they would choose to do. Regardless, Keita would continue while they read it over.

“The scrolls are linked to the skill that I’ve created, and they will automatically update themselves with completed techniques and methods of learning them. The main technique requires our special technique, Mist Rain, which I hope to also ask for permission to learn today.” Keita would simply sit there and wait for any questions, and an answer to his own request.
----------
WC: 460
2 x Scroll of Divine Calligraphy given to Murata

Murata carefully takes the scroll as Keita speaks, keeping it clear of the scattered coffee mugs and offering it the delicacy and care deserving of his handicraft. Even if they had contained no hidden knowledge of practical use, they would be of immense value simply as pieces of art. His brushwork is enchanting to behold. The theory contained within is far out of her breadth just from a scan, but she can gather that it is a form of fuinjutsu that eschews the need to draw on surfaces, and she recognizes some chakra forms and notes that correlate to Tempest release. Her mind mulls over the village's roster, thinking of shinobi that could be trusted to learn the techniques within and help Keita develop them further.

"That's handy," she murmurs in response to Keita's note that they automatically update themselves, unfurling it further as if looking for the empty space such notes would fill. At his request to access the same technique his friend had a few weeks prior, she offers a knowing smile. "Of course. I couldn't let a technique like this go unfinished, could I?"

Murata draws a key and unlocks a drawer in her desk, drawing out an ornate box. She opens it up and takes the two scrolls offered by Keita to place them inside, in turn taking out a pale scroll to unroll on the desk before Keita - the details of the Mist Rain technique. It is of lesser complexity than what has been offered to the village, but likely no less potent.

Her meeting with Keita finished, Murata puts the new techniques safely away.

Keita watched as the new Mizukage delicately grabbed the scrolls he had presented towards them, and his smile became a little softer. He enjoyed when people treated what he had created with respect, and even though the Mizukage did not have to be courteous and delicate, they were, which made Keita thank them in his heart profusely. He watched them give it a quick glance over, knowing that they were not quite the fuuinjutsu specialist that he was, and so most of the instructions and knowledge on it would be pretty foreign, but that did not matter. After a bit of looking, the Mizukage then opened a special locked drawer before placing the seals in there and retrieving one of their own.

Keita was glad that he had gotten permission to use the Mist Rain technique, as that was going to be like a little avalanche that allowed him to become much stronger in a short amount of time. This would get him closer to the Tempest Release Typhoon technique that he had created, even though right now it was more of an educated guess. All he would need to do was to finish its practice and it would be corrected within the scroll if there were any discrepancies, which was a part of the reason he made the self updating scrolls in the first place. After that was done, it seemed that the meeting was over. Keita made sure to memorize the contents of the scroll before taking his leave.