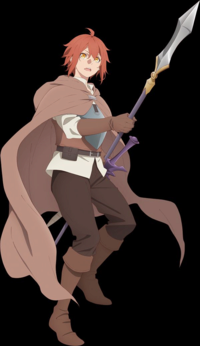 Regis would be walking out of his home early that morning, and just like any other morning. He made sure to pack a lunch with him as he walked down to the training grounds most of the ninjas in hoshi used. He hummed lightly as his sword would lightly jiggle and make a light clang noise as he moved. his red hair was kinda long and messy and his amber eyes looked around. He made sure he politely wave and smile at people as he walked. Once there regis would take out his sword and practice his discipline. He would try and swing the sword a thousand times before he did anything else. which would only take close to an hour. His arms hurt a bit and his body would shin from the sweat of his warm up. He smiled a bit and looked at his arms as he felt them ache. Then he would take a small break and sit down on the ground. He was near some trees as he took cover in the shade, and chug some of the water he had, feeling the dryness of his mouth drink in the water. he would sit there panting for a bit as he thought about what else he should do at this moment.

With both Leonidas and Aemon by his side the Nova Commander would be making his way to the Water Gardens, a beautiful place in Hoshigakure where many shinobi alike gathered to train, hence why most people called it the training grounds. It hadn't been that long since Akaboshi last found himself there, back then quite a lot of Genin had gathered to learn from their seniors, even the redhead himself taught someone a thing or two. It's what his role was all about, preparing and guiding the next generation of Haven. After a rogue's attempt to subjugate their village the Uzumaki became aware they needed to get stronger in order to be ready in case of a next time.

Still early in the morning, the white cloak firm around his body, Akaboshi arrived at the training grounds. Upon doing so he noticed a boy not that much younger than him, with equally red hair about as long as his own. As the Nova captain continued to watch he'd witness how the shinobi would be swinging around his sword, most likely specializing in the art of weaponry, before taking a small break. Aware of how tedious doing the same over and over again could be the red haired Uzumaki decided to approach the young shinobi, curious if he could be of help in any way. "I see you're up early training, how's that going for you?". With a friendly smile Akaboshi addressed the fellow redhead, Leonidas and Aemon keeping close but allowing the captain some space to engage in a conversation.

Regis was thinking about maybe he should try and find a ninja in the village that could teach him a thing or two about weapons, since Regis in his own opinion knew how to swing a sword but didnt know about how to do anything fancy with it or skilled. And or maybe trying to find out about his own blood, the uzumaki clan he was told he had in him. As Regis was taking his break he heard a voice behind him, It caught him off guard and made him jump. He turned to see a young man not much older then him with similar red hair. they looked almost the same but for Regis's amber eyes. "Oh ah kind of well, I don't know if i am developing any good or bad habits but it is going well, and you are?" He would say with a smile looking at the man . He also noticed the two men behind him, apparent. To Regis this man looked like a prestige figure. Taking note of how fancy and well off he looks vs Regis. which he didn't think this was a bad thing, either born from blood or earned from merit. Though it was a shame that Regis would be dripping of sweat lightly. "What's with the two guys, bodyguard's? oh are you important figure." he would smile more thinking someone important wanted to talk to him.

Akaboshi had to laugh upon hearing the young man's question, a feeling of déjà vu from the time someone else made a remark on the two men accompanying him. "Some might call me important but in my eyes everyone is" the redhead replied with a gentle smile. The Uzumaki never cared that much about rank or titles, treating a Genin no different than a Jounin. But for many others he would be of some importance, especially now that he was the man leading the White Swords of Hoshigakure. "Akaboshi Uzumaki, Nova Commander. And you are correct, they are my personal guards whom I trust with my life. And who might you be?". By then he had signaled both Leonidas and Aemon, letting them know they could relax for the time being.

From what he could tell and make out of the situation it appeared that the young shinobi was one practicing swordsmanhip, trying to hone and master his skills with the blade. "Anything else you are wanting to learn? Doing the same over and over can get tiring, not that it's a bad thing to do but it also wouldn't hurt changing things up once in a while". If the youngster preferred to continue swinging his sword then the Uzumaki would simply keep watch but in case the Nova Captain could be of use in a different way then he would assist to the best of his abilities.

Regis would listen to the man and nod slowly, nova commander now that was a powerful title. he look at the two men then back at akaboshi. regis would scratch the back of his head and think for a moment. "would that mean you are powerful if youre a commander? why would you need two guys following you around, are they as strong as you or are they training under you?" he would peer at the men with his amber eyes then back at akaboshi. maybe he was naïve but he didnt understand the point of having guards following you if you where strong. "Oh I am Regis Uzumaki, please to meet you sir Akaboshi." he would give him a warm smile. now it makes a bit of sense of why they looked so similar, they where both Uzumakis. this was a good opportunity for regis as he didnt know a lot about his heritage. but the man brought attention to his sword training and asking regis if he could be of help. "ah well i dont know if you know much about swordplay, but if you dont would you mind telling me about... well. our clan, I do not know a lot about it, I have adopted parents you see so i never knew my parents and my parents i have now do not know much of our name sake." he would give a small nervous chuckle. he must have seemed to be a bit dumb in order to ask about his own family secrets but maybe this red headed man could help show these secrets Regis didnt even know he had. Since his information was very limited to the on goings of his own clan. this did make him feel like an outcast as well since he never knew what he was or was not missing without knowing what he assumed other Uzumaki children would know.