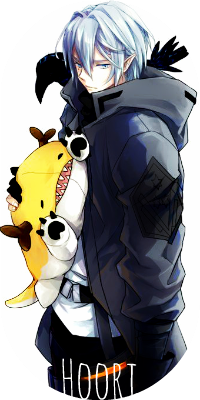 He wasn't wrong and Hoori couldn't even argue with that. A small smile appeared on his face as he scratched his head and shrugged," Yeah man you got me there on that one. While I can't throw hands I can definitely avoid them until I get a pointy stick or a slingshot hah," the small sigh of relief was what he needed to cool off some of his nerves. The most impressive thing he would ever accomplish? Shin? The man was known by Hoori to one up everything he does so for this to be the penultimate achievement of himself almost scared the poor Hyuga. Whatever it was he was so sure of it that he wanted Hoori to attack him, and only because of that he would. Pulling back on the bow once more he would create another water arrow much like the first and with swiftness release it. Watching the arrow fly directly through him both puzzled and shocked Hoori as the arrow continued to fly and soon dispersed. What he didn't expect was a counter attack and so he began to knock another arrow only to see that Shin had passed through him. A loss for him as he sighed and released the chakra in his hands and listened to the explanation clearly. It would have appeared that Hoori had once again fallen short of his friend, and while proud of the accomplishment that Shin had made he was also envious," ...Once again you've proven which of us is actually better. Got to admit that I didn't see that coming...a whole dimension huh?," he didn't sound discouraged at the fact but the mental thoughts would never show in the light of day.

Looking at his bow he figured that there was one more thing he could show his friend. Placing his bow back onto his back, he would perform a set of four seals and clap his hands. Stepping back a few meters from Shin so there was no friendly fire (if he was still phased he wouldn't mind as much). From his body would emerge four wooden shafts would grow from him. Two on the back and two from his left shoulder. The wooden shafts would remain for a moment before he released them, shooting them into random directions, but none directly at Shin. This was the only technique he could learn on his own utilizing the powers of the Senju, but he was going to master it," I know the Senju are masters at many skills and techniques...but the wood release wielded by their greatest is among the best treasures of their clan. At the moment I can only utilize this one technique but in time I will master their arts and create my own playground...my Hunting Fields if you will," it wasn't an impressive feat sure, but with time and mastery he would make it his own. Shin would give a small snort of amusement at Hoori’s admission of which of them was ‘truly better’, if there was anything that The Hunter should know it was that their strengths lay in completely different fields. Hoori was his brother in all but blood, and they had been together as partners for damn near a decade now… so Shin was more than able to read between the lines, and he could positively feel the envy exuding from Hoori, and Shin was certainly not the type to let something like that lie. However, he was more than willing to let Hoori continue with his demonstration, and what a show it was. The power of the Senju was something feared across the nations for a very good reason, their Wood Release was legendary and was something many sought… and many of those people went on to become legends in their own rights with the use of it.

“My brother, you and I know this better than anyone… not everyone's strengths lie in the same areas, something our brainwashed brethren back in Rice simply can’t fathom… It's the reason behind our freedom nowadays. You and I… we are like oil and water, our strengths and weaknesses are very different. I can barely pull back the drawstring of a bow, and even if I did manage I think I’d be more likely to hit myself than a target of any kind, while you… heh, do you recall that one contract back in Tornado? You hit that nobleman from so far away I had to focus my Byakugan just to see it, so that’s easily further than 100m, and the shot was barely an inch off. And now you have the ability to spawn fucking forests that you can play in… if I didn’t have the Byakugan, and I wasn’t your partner, I would be absolutely terrified by that combination… but because I am, I am very excited to see this little show of yours in action when you master it.” The Assassin would say with an easy smirk on his face, walking forward a few steps and putting a reassuring hand on his friends shoulder.

“Stop worrying, you know me Hoori… I pull ahead because I’m a paranoid fucker that can’t keep still for long enough to actually enjoy the journey, you lag behind because you actually have the ability to enjoy the scenic route… heh, just look at our journey to Suna. I got here a week or so earlier than you because I came straight here, through the desert in the dead of night… something I am not keen to repeat, let me tell you.” He would then say with a light chuckle and a light shiver… even with all the layers he had on, that night trip was a bad idea.

A small smile appeared on his face as he placed his bow back onto his back, crossing his arms and like that he was back to normal. One of the things he didn't naturally admit was that sometimes even he needed validation. When it came to how he carried himself, Hoori would always make it to where people only saw the charismatic, strong side of him. Because he had seen Shin as more than a friend, a brother even he often let down that facade but he knew that his secrets would always be safe with him. When he brought up the job in Tornado, it caused Hoori to chuckle slightly and rub the back of his head," Yeah you gotta point there. For me its I don't want to fall too far behind and then I can't keep your back because i've slacked off you know? So i'm going to beat myself up a bit because of that, but you're right. All good things happen with time and eventually i'll be the wind on your back once more...probably be hailed as the strongest duo in the world of Missing Ninja yeah?," now there was a goal he could look forward to. The mere mention of their names causing quite a stir in the world as a whole....Maybe that is what could work toward. The bit about him being a little concerned if Hoori was not his partner was no slight bluff but in all honesty Shin also scared Hoori in that aspect. While the combination of Senju and Hyuga would be a formidable force for sure, Shin's expertise with space-time had also been a problem for the Hyuga, especially with what he had just shown him. All in all both of them had something that would definitely make a hard fight for them.

" Paranoid is definitely the term i'd use," Hoori would chuckle and side eye his brother before continuing," But in all seriousness I think that's the thing about you i admire. While I like ot goof off and enjoy the...fruits of the world, you definitely push yourself to be better and stronger so that no one gets the drop on you or can get the drop on you. If I had a little of that mentality i'd probably be in a better position, but the race i'm running is just too fun. Then again most don't get the drop on me even at my laziest. So what are the plans for the future buddy because I know you've thought of things after Suna. What are we going to do next?," it was something he planned on bringing up at some point once he amassed some more money, but now might have been the better opportunity to ask about it.