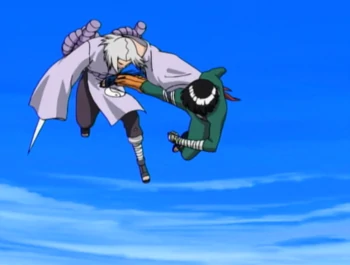 Handseals: -
Duration: 3 Posts
Cooldown: 2 Posts
Range: Touch
Power: 20
Speed: User's Speed
Health: -
Stat Boosts: -
What it does: A more potent version of Leaf Whirlwind. The user utilizes a more powerful rotation when throwing their kick towards their target. This can be utilized in one of two ways. The kick can be used to deliver a single, more powerful blow than its less potent counterpart. Instead of dazing and disorienting the target, this kick will immobilize and knock them backwards up to twenty meters. If the target is knocked into an obstacle or the environment with health, they will take half of its health as Impact Force. If the target has more strength than power of this technique, they may resist the immobilization.

Alternatively, the user can deliver three separate kicks with half the current power of this technique each of varying effects depending on how many times they were hit. The first kick will daze and blur their vision temporarily blinding the target and preventing them from using hand signs for one post similar to Leaf Whirlwind. The second, subsequent kick will immobilize the target if they are already under the effects of the first kick. The final kick can be used to either launch their target up to ten meters in the air or knock them ten meters backwards. If the target is knocked into an obstacle or the environment, they take half the durability of it in Impact Force. If the target has more strength than the power of this technique, they may resist any of these effects.

Now leave me be fruit xDD