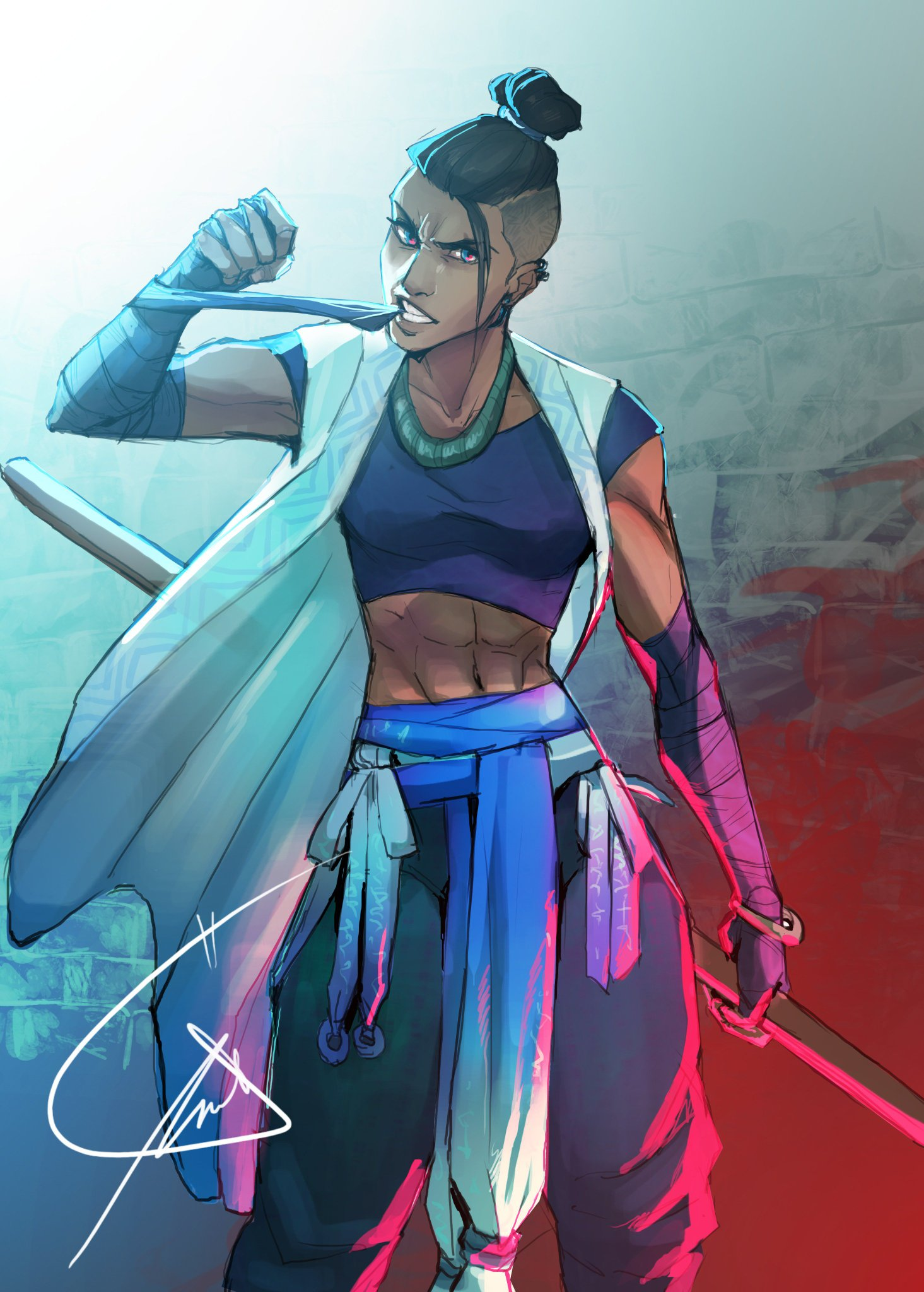 
Appearance: Nova is a young woman who’s taller than average with a very muscular physique and medium-brown skin tone. She has reddish-blue eyes that almost seem to change colour depending on her mood, though it could easily just be a trick of the light. The modicum of effort Nova extends into her appearance is keeping the sides of her hair shaved, and tying it up into a messy topknot. Nova has a very rough appearance that makes her seem older than she is, with a face constantly screwed up into a scowl and nose that broke at some point and never properly healed.

Nova tends to stick with clothes that are various shades of blue and prefers her clothing to be light and breathable. Her knuckles are often swollen and bruised, though they are rarely visible due to the bandages tightly wrapped around both her arms.


Personality: Nova is a very volatile person and is very quick to leap to violence when talking to people. She doesn’t have any qualms about beating people to the ground to teach them a lesson, and also, in fact, rather enjoys it. Where Nova crosses the line is actually killing people and just the thought itself makes her feel uneasy. She’d like to believe that, if the cards were down, she could end the life of an enemy shinobi to protect herself or her village, but it’s not a sure thing.

Nova is very self-assured and confident in her own abilities but isn’t boastful in the slightest. She doesn’t feel a need to prove herself to other people, and will probably always be the first person to admit she messed up. If someone does something genuinely impressive they will earn her respect and she will be a lot less standoffish with them.

Despite coming off as a violent thug, Nova possesses an above-average intelligence and is very perceptive when it comes to people’s true intentions. Even with this insight into people, Nova still struggles to actually talk with people even when she wants to.


History: Nova was born to two wealthy merchants in Kumo, and lived a very lonely early life in the huge manor her parents owned. She rarely saw her parents and was raised mainly by maids and childminders, treated like an annoying afterthought. Even at a young age, Nova was perceptive enough to get the sense that her parents didn’t really want her for some reason.

Nova, who was already a compulsive and energetic child, began to act out to try and get the attention of her parents. Sneaking away from her minders, questioning their authority, and causing a mess whenever she could. This new behavior certainly got the attention of her parents, but not in the way she wanted. Nova was routinely punished and kept inside the house under strict watch, akin to a house arrest.

Being harshly punished didn’t dissuade Nova, however. In fact, it made her behavior worse. She started openly breaking things in the house and at one point broke through a window to escape the house. Her behavior started a vicious feedback loop where she would do something, get punished for it, and then do it again but worse out of spite.

Eventually, Nova was put into the Ninja Academy by her parents in an effort to tire her out and make her less of a handful at home. Although Nova never found out, her parents even paid off the Academy staff to work her harder than all the other students. She was kept behind for several hours every day to run through exercises and drills. For a time, her parents’ plan worked. Nova came home every day completely exhausted, unable to do much more than eat and then sleep until the next day.

Nova's anger at the world rose exponentially as the years went on. She started to lash out at her classmates and at one point nearly got suspended from the Academy for breaking a boy's arm. Due to all the extra training she'd received, as well as what she did in secret at home, Nova was much stronger than the kids in her class, and even some genin. She got a reputation at the Academy not unlike a rabid dog; everyone was too scared to talk to her.

When Nova finally passed the genin exam, her parents finally legally disowned her. For the first time in her life, Nova didn't have anything to pine after. She'd spent so long trying to earn her parent's attention that it had completely ruined her development. She had no friends, no family. She managed to buy an apartment with the money she earned being a genin and did the bare minimum amount of missions she needed to do to remain a ninja

A few years after being disowned, Nova began to fall in with the bad crowds around Kumogakure. Her natural talent at fighting lent itself well to the underground brawling clubs she ended up a part of, and she became a fan favourite because of the particularly brutal way she fought. Since she won every fight, betting pools started to dry up and the boss of the fighting pits instructed her to take a dive in her next fight. Nova, being the spiteful sod that she is, refused and ended up getting her shit kicked in by some ninja-level brutes in the club.

After being beaten to within an inch of her life, and thrown to the curb, Nova was once again lost and without a path. So, she began taking her ninja career more seriously. Hoping to maybe finally find her purpose.