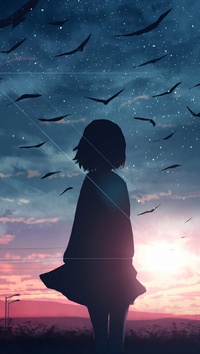 Task: A photographer needs an assistant for the morning doing basically menial labor. You’ll help him with lighting, placement, and whatever else he may think of during your 4 hour shift. The subject matter he’s shooting is completely up to you.

Rin felt like she was at the bottom of a pit. The village responded with naught but emptiness. Well, that was a lie, but it certainly felt that way. Everyone was, it seemed, tending to events internationally. In the meantime, she had to make do for herself. Lower staff meant more hours, and more hours meant more misery. Still, could she honestly say that this extra time to think and self examine was a bad thing? She wasn't quite sure. It wasn't like her opinion meant much, anyway, even when it came to her own emotions. Some days, Rin felt like she barely knew herself.

These thoughts, for the most part, vanished when she picked up her assignment. Only four hours? Pretty nice. It was a genuine mission assignment today, even if it was a menial one. Photography work wasn't too bad, though she couldn't possibly imagine what kind of madman would pick this location, of all places, for a photo shoot. As she approached the building, her suspicions grew. Well, whatever. This guy had taken out a contract with the shinobi force, so he must be credible. Well, that left really only one option as to what kind of shoot this was. Not that Rin really gave a shit. Get the work done, get the fuck out, go home, were the only things that were on her mind.

The next few hours passed like a blur. There was plenty to do, but she could barely recall any of it after it was all done. It was a sort of bad habit meditation she got into. She'd learned a long time ago to stop worrying about how much time was left in the task, or how much easier or more difficult it would get over that time. Instead, just be present in the now, and knock things out, one at a time. Eventually, the hardship would end, though the raincloud over her head would never go away.

Setting up lighting, prepping surfaces, bringing in equipment... this was basically menial work for menial laborers, except she could climb walls and shit like that. Genin really were just grunts after all; meaningless in the scope of things. Her labor went to someone else's profit, and the likelihood that someone as inadequate as she was could advance was, well, abysmally low. Still, as they said, anywhere could be heaven as long as she chose to live, so here she was. Still kicking, still fighting.

When she was done, the photographer thanked her and sent her on her way to get her reward. On the way out, she saw what she had expected: models coming in for the shoot. Yeah, of course. It was that kind of shoot. Rin rolled her eyes and stumbled home. Only a short time into her shinobi career, and she didn't know how much she could take. What kind of life was this? As she came back more fully into awareness, the pain in her body became more and more sharp...

Task: There is an old client that needs someone to do grocery shopping for them. Their body is aching, so they can’t do it themselves, and their social worker is off handling something else for the client. She asked for someone to do the food shopping for her today as she has a list prepared for those who accept this mission.


Another day, another doldrum. Rin waddled over to a park bench where she sat down to open her assignment for the day. As she thought, since she had completed an actual mission the other day, there was another one here for her. The harder she worked, the higher the expectations the village had of her. Well, that was life for you. The more you worked, the more you got worked. Rin wasn't one for comedy, so she didn't fucking laugh. Honest. Life poured itself down her throat like a bitter libation, and she took it like a goddamn champ. Didn't they say living was the best choice?

Either way, rather than hiring some kind of private service to dash food to her door, this old bitch was hiring the shinobi to do it... Oh, wait. Kumogakure didn't have any private services like that. Sweet lord, what a hellhole. The fact that the local paramilitary force was being contracted to run errands like these really said something about the state of the village. She'd seen people arguing about shit like this on the big screen. The skinny dipshit on the right kept screeching about how people should move if they didn't like the state of their environment, while the fat fuck on the left roared about some kind of stupid learned helplessness crap. Rin wasn't about any of that. She was just counting down to the end. So, too, was she counting down the blocks until she reached the commissary. A sturdy, brown building, it served as sort of a hub for commerce in this small neighborhood.

She entered the store and double checked the list she had been given. Standard, for an elderly citizen. Rin plastered a smile on her face and started browsing. College students, dropouts, and ne'er do wells staffed this place, overseen by some hardass old fucker who thought he was hot shit for having a middling, empty management position. Retail work, right? She supposed she was lucky to be a shinobi. If she had to work in a place like this, she didn't know what she'd do with herself. Silver linings, tarnished as they might be, were still silver.

Rin picked up a spare cart and wheeled it through the aisles, picking up the items on the list. The aged fuck was very specific, which helped in a way. She knew exactly where to go. The client must have shopped here frequently, back when she was younger. The "good old days", as they said. Bah, nonsense. The days were never good, as far as she was concerned.

Rin turned over the voucher for purchase, grabbed the bags and headed out of the store. It was only a short walk to the client's house. Rin eyed the instructions again, cocked her head, and headed up the apartment stairs. She set down the groceries, made the delivery, spoke the rote lines and had the rote expressions, and went home. An easy hour and a half, all things considered. No doubt, things would be harder tomorrow...