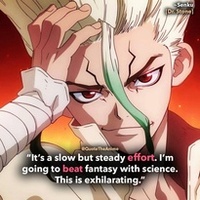 It had been several hours since Faustein had interacted with the gate guard at the Suna gates, aka "The Cleft" and entered Suna proper. Due to being new to the locale, it took him a while to get his bearings and a working understanding of the village map. However, once that was done, he was well on his way and had found out after making a series of inquiries that to meet the Kazekage in office currently, he had to go to some place in the village called "The Spire". So he had set off for said location and after what seemed like hours more of walking, he finally made it to this new destination.

Well, here we go, first turn honors are mine...

He mused with a smirk as he headed up to the Kage's office with paperwork and the ID he was given in hand and soon reached the room in question and knocked on the door after which he announced himself in that same naturally rich, resonant, baritone, and melodious voice which for whatever reason often caught people by surprise when they saw his slight build and young age. He made sure to speak loud enough so his voice would carry through the door and could be heard clearly by the room's occupant(s).

After that, he fell silent and waited for whoever was inside to grant him permission to enter and begin the next phase of his induction into the village.

It had been a fairly normal day for her in the Spire, paperwork seemed to be an ever present task that had no bottom, so maybe she was so engrossed in the work when she heard the knock at the door without warning. She froze in her seat as her eyebrows drew together in confusion, unlike every other time someone had knocked on her door there was not a heartbeat accompanying it - only silence - and then an unfamiliar voice asking for permission to enter. The confusion morphed into a hard expression as she stood from her mahogany chair and approached the door on silent footsteps. Pulling open the door suddenly she stared at the face of a stranger that stood several inches over her 5 foot 3 stature, but the height difference did nothing to change the fierce expression she was giving - the violet and crimson dual tone of her eyes bore into his for a few seconds before she stood aside and waved him to enter. She watched his back as he moved into the room past her, most likely taking a seat in one of the two deep blue cushioned chairs sat in front of the dark wood desk. As he took one of the seats she would snap the door closed, the intense gaze unwavering from him - and the silence where the heartbeat should have been was louder than anything she had heard before - and it irritated her. Had her ears failed her?


That's not possible.. Everyone has a heartbeat and he's clearly breathing so.. What is going on.


She came around and sat at the desk once more, leaning on her elbows toward him before finally speaking, “Who do I have the pleasure of inviting into my office today and what is it that I can do for you.”, her voice was a high tone but it was direct and flat in delivery, the words sounding more like a statement rather than a question. Mizuki was rarely like this, especially not to new people but there was the issue of a silent heartbeat that just… didn’t sit right with her. He was a thin thing though, young in the face with intense red eyes…

Faustein had been waiting patiently while reviewing his paperwork for the next phase, aka his official village induction application when the door finally opened and there stood before him the current Kazekage. She was shorter height wise than himself, but somehow the intriguing look she gave him made her tower over him, metaphorically speaking

Ah, at last...sure took her long enough...must be busy with paperwork or some such Kage's bane...

He mused silently for a few seconds before he was let in, and when he was, he headed up to one of the deep blue cushioned seats and took his place across the desk from her. Then, as he continued to listen and observe her, he heard her make the expected inquiry as to who he was and what his business was but somehow she seemed...preoccupied, if that hard look she had given him earlier was any guide at all, but he did not have any more data to go on at the moment, so he focused his attention on her queries instead, speaking in that same unusually rich, powerful, baritone and yet melodious voice which was natural to him

"My full name is Faustein Kuroyakushi...though admittedly, my current last name is that of my adoptive parents who are proper residents of this fine village. Their names are “Siegfried Kuroyakushi” and “Izanami Kuroyakushi”. Perhaps you have heard of them? According to them, at least, they are high ranking medical ninja in Suna's medical corps..."

He smirked briefly and trailed off for a few moments there, leaving that question lingering in the air between them and then resumed

"Regarding my objective in coming here and requesting an audience with you, it would be because I wish to align myself now and forever with Suna and so, with your permission, I would like to join the ranks of Suna's ninja residents officially. So...what say you?"

With that, he ended and fell silent, wondering what she would say in response and also whether he had made some sort of impression on her in this first meeting of theirs, enough to warrant letting him become an official Suna ninja, that is.

Running her tongue over the inside of her teeth she would nod slowly as she set aside the feelings that kept nagging at her. He was just another newcomer there was nothing to worry about… plus you have more than enough on your plate right now for this to take up more of your time - figure it out when you return. Clearing her throat she reached out and gingerly took the paperwork, checking it over with a few cursory glances before looking back up at him with a single raised eyebrow. “Seems you and I have something in common Faustein, both of us were adopted…” she would trail off, the tones of her voice becoming more bell like as she tried to settle the unease.


Reaching down into one of the drawers she would pull out a deed to one of the homes in the city, the keys and a Suna headband - with the impossible triangle as its symbol, long since replacing the old symbol. “As it happens I do know the Kuroyakushi’s work, though I feel as though my predecessor Lord First would be more familiar with them in personal terms.” As she slid the items over across the table and took his filled out paperwork she would tilt her head to the side and give him a gentle smile. “I look forward to getting to know you further upon my return, you caught me right before I depart tomorrow - good timing. Almost… supernatural, either way enjoy your new home, settle in and get to know the people who remain… If I recall we should have some allies from Konoha joining us for a time any day now. You’re dismissed, and welcome home.”

Faustein sat there watching her every move with that same nonchalant expression on his face as he had till then and when she asked for the initial paperwork, he had handed it over while fighting the urge to chuckle with all his might, knowing that it would probably have hurt his chances at clearing his current prime directive, aka joining Suna as a permanent resident and part of its ninja forces. Fortunately the only thing that showed this outwardly was the twitching of the right side angle of his mouth up and down briefly every now and then.

Faustein remarked in response to hers about their common lot in being adopted children of Suna, his smirk just a little wider than it was before. Still, this passed as quickly as it had come and then came the fun part, wherein he saw her retrieve a headband, keys to his designated quarters within the village and the all important title deed to said residential unit and received these from her with a cordial businessman's smile, the same one he had used with the gate guard several hours earlier.

"Ah, you have my eternal gratitude for the prompt approval and for providing me with such a generous starting citizen's package as well. It is also heartening to hear that you are familiar with the work done by my foster parents."

"Likewise, for you intrigue me greatly, much more so than most others I have met till now. And yes, it would seem that the two goddesses I had prayed to before embarking on this expedition and endeavor of mine today have granted me the distinct privilege of not only an encounter with, but also of conversation and permanent citizenship in this fine village by a third...so it is most certainly good fortune of an almost supernatural sort."

"Thank you for the welcome. Certainly, I look forward to interacting with and getting to know everyone who resides here in the village...most of all, you, as well as these Konoha allies of ours, of course. Good day to you and good luck with your endeavors. Au revoir."

With that he fell silent and after flashing her the same amused smirk one last time, he arose, tucked away the items and papers she had given him, turned on his heel briskly, and headed off out of the room and then out of the "Spire" building and off to find his new home in Suna.

-Earnings Put Into: Stat Upgrade (+5 to Strength AND +5 to Chakra)