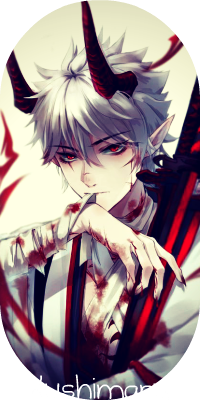 "That did nothing to deter him...very well then. We can still win this," he thought to himself as he prepared himself for the one on one with the taijutsu practioner. As he watched the male pull another kunai or two from his pouch he knew the tactic well and smile knowing what would come next. Preparing himself he would brace for impact as the two came but the result was different while he was still out of reach for the explosion, the smoke began to billow and impact the area he had been in. The smoke while a hindrance did more against Ishi than he would hope...he was now blind in the darkness. While he could see and hear only in front of him, he couldn't fully utilize his Meigan in the darkness. So he would have waited. The peddling of footsteps alerted him to the sound of the male coming, but without sight he could only go by sound. However that would prove to be the failure he would encounter as he moved to strike at the male...but missed. The feeling of his right arm being grabbed alarmed the young shinkou as he moved to attempt to free himself, but once he felt his body being lifted off the ground he knew what would happen.

The next feeling was that of his body hitting the ground as if for a moment he lost the very breath within his body, causing him to gasp to bring it back in one fell go. Everything went silent for the male as he felt the pressure against his head...and then his arm as it began to rip and tear from his socket before soon...it was gone. The last thing he felt was the warmth of his own blood splattering his face as he released a loud, rumbling scream that he didn't even think he could produce. His left hand went to grab at the area in which he lost his arm. Grasping to feel anything...anything at all. The tears that ran down his face stained the ground alongside the crimson pool that was underneath him.

As he felt the fleeting gift of life leave im he could feel it...the regret. The look on his sisters face as she buried her own brother...the last of their kin. In his fleeting moments he begged to be spared...to be saved...for redemption. As the light began to fade from the Shinkou's eyes a voice was the last he heard.

The words came out as a quiver from the boy as he laid there to accept his fate," Yes..." Everything went quiet for him until he felt it...that force that was apart of him take over his entire being. As if he was a puppet he stood silently, moving toward the area where the voice of Kiyoshi was. Letting his guard down was the last thing he would do...as Ishimaru erupted from the smoke, his left hand grabbing the back of Kiyoshi's head and from it erupting 5 dark tendrils that would rip through the mans skull, piercing through his mouth, nose and eyes at the speed of 150 and a power of 100 as a yell erupted from the young genin. Those eyes that were lingering among death glittered with the light of ambrosia as a smile crept upon his face. As the blood spilled from the stump of his arm so too did the blood splatter from the same man who took his arm. In the same breath, Ishimaru would take his arm back as Kiyoshi's body dropped to the ground," You're right... But you look better like that...," the deep, abyssal like voice crept from the mouth of the boy and for now...he won.

The sound of innocent laughter - a child no more older than 5, maybe 6 years of age. Sitting within the stands amongst a number of people - cheering and laughing from the sheer entertainment that was before them. Big eyes full of potential looked up to a man that looked much like Kiyoshi himself, but this man sported a beard, crimson eyes and mole under his left eyes. This man was his father, they often spent time at events such as this one to watch shinobi spar in good sport and win with grace, lose with humbleness. Respect given... his father loved the arena and all that came with it. Kiyoshi loved his father and wanted nothing more than to make him proud. All the boy could think of..."Some day, I'm going to be an arena fighter and I'm going to make you proud, father!" Voice trailing off to an echo that ebb into the distance.

Little did that boy know that he would be trapped in a circuit that did not care about him or his future...or the love he had for his father. Forced to kill opponent after opponent. Each victory became more dull in earning...grim in reality. Eventually he grew numb to it all, eventually he lost himself to the system that was designed for murder...never did he get the chance to see his father smile at him standing in the center of the arena. Never did he receive a letter back whenever he sent out the invitation.

The corpse of the Hikari fell to the very ground that he once viewed as his grand stage. Motionless... lifeless in his death as his soul was taken to the afterlife.

Congratulations to you, Ishimaru Shinkou for surviving and developing from your first D Hunter Mission.

It was over...the glowing amber began to fade as his last sight was the dead body of the one who had taken his arm. The blood had begun to finally leave his body as he wobbled before collapsing onto his knees. Whatever had happened with his body it was now over. The only thing he heard last was the shuffling of feet before he heard himself being taken away and soon...darkness took hold.