A Day to Remember [Observation]

With all that took place and the speeches that were given to compliment, Souji found no true reason to stick around the spire. His eyes would fall on his sensei and team. "I'm going to call it a day. I have to head home and prepare a dinner...." His eyes would find the Ogre, lazily gazing at him. "No, you cannot come, so don't ask." Sure that his best friend would have asked sooner or later, be decided to address the soon to be posed question ahead of time. The boy would nod at his sensei before nodding to his team, pausing before giving one to Asahi...

He would make his way through the crowd of individuals. Finding the path that leads to his home. As he navigated through the village with a heavy thought lingering.... "Just what was that feeling I was getting from that guy earlier? It was...it was cold and disturbing. I nearly lost it." He thought, hands deep within his pockets as he felt the wind on his face and hair. The breeze was refreshing. "It's almost that time..." He spoke, absent of mind. To what this meant would be addressed at a later point in time, but to him it was a heavy realization. The clenching of his fist within his attire was enough to suggest such. 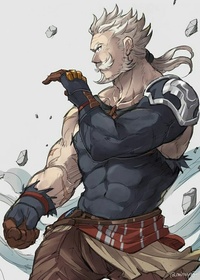 As the festivities begin, a hooded, red-eyed individual comes to the stands of Raleth and Khabib.

"Come, come," squeaks the wild-eyed beef-kebab vendor, "we have the best seasoned beef in suna!" He cuts a sizeable strip off the roasted flank and offers it to the individual. "Try for yourself!" The immense, ashen-haired jounin would chuckle as the hooded man took the beef. As the man samples, he asks for the reason for the festivities. As the Sarutobi begins to answer, the brickwork shifts, revealing Kenshin Uzumaki and Mizuki Ohta.

The First Kazekage addresses his people and crowns Mizuki Ohta Second Kazekage. Even from this distance, Raleth can see the discomfort flash behind her vampiric eyes and chuckles to himself.

Guess she didn't know about this either...

The crowd goes silent as she steps forward, the Kazekage addresses her people, explaining that her and their will is shared. The crowd cheers, singing her praise. But, as Mizuki leans forward and places her hands on the railing, her countenance dulls the crowds excitement. She tells them to enjoy the current festivities, as the days will soon become darker in the coming months. Many in the crowd shift in discomfort upon hearing this. As the Kazekage tells of Kiri's hold of Konoha, wrath flares inside of the Sarutobi.

Mizuki reveals the details of the summit, of talks of peace that fell into declarations of war. Many in the crowd gasp, stunned and shocked that their lives will soon change, that the fragile peace they thought they had will now be replaced with the preparations for war. Some cheer and clap as the Kazekage releases the railing, sure that, witb her leadership, Suna will survive the ensuing conflict, and thrive. Others stay silent, their emotions masked behind a blank face. Raleth Sarutobi, a survivor of the initial invasion of Konoha from Kiri, does not know how to feel.

All out war should be avoided, thinks the aged Sarutobi, but I knew those Mist Village Dogs would never agree to peace. He turns to Kabib and sees a forlone look in his friends wild eyes. The scraggly-bearded man looks down, shaking his head and clasping his hands in prayer, muttering something under his breath.

"Please," he says to the gods of wind country, "watch over our homes, let war not touch this land and people."

At the conclusion of her speech, Mizuki Ohta, the Second Kazekage, tells of Sunagakure's determinant will, that can overcome any obstacle that will meet them in the future. As she turns, the crowd cheers, and praises the level-headeness of a Kage who will see them through war. The festival, dubbed The Celebration of Ohta, continues as it would, with games, villagers, and vendors participating in the fun. An air of desperation hangs over most of the participants heads, as they all know days like this are numbered. The day wanes, the games have been played, and the vendors pack their things. Kabib gives Raleth a short goodbye, the news of war seems to have dampened the spirits of the kebab vendor. Raleth feels for him, but knows that such conflict should be expected, specially dealing with the Bloody Mist. The Sarutobi packs his Tea Cart and wheels it toward the south easterneastern district of the sand village, to return the wares he was entrusted with to the Uncle's Dragon. As he comes up to the road besteled between two buildings, he turns down the small road and seesees something that makes him pause. Mrs. Harushuno sits on the steps in front of the tea shop, weeping and sobbing. She hears footsteps and looks up to see the ashen-haired Sarutobi. No words are exchanged, what has transpired is already known.

Not having time to process this, Raleth sits down next to the grieving  widow, and consoles the one who lost her other half.

Having left his three genin to wander about the festival, Zaine gave himself a small period of time to enjoy what the day had to offer- walking through the crowded mass of people he would look around for any familiar faces, seeing some people that he had been acquainted with but no one he was close to. He was surprised to see that the festivities only seemed to intensify as the parade with on with more and more people pouring in as the celebrations grew louder. This was a signal if anything that it was time for him to leave and return to his duties- there was much to be prepared and he needed to touch base with some of the villages officials before anything could be set.

Checking in on his genin from afar, he would note that they seemed to be enjoying their time and with a soft smile he would turn his back and leave them to it- interestingly enough he was even able to spot his long time friend Raleth in the distance before leaving but thought it would be better if the two of them caught up at a later date. He began his path towards his home, anticipating that he wouldnt spend much time there.