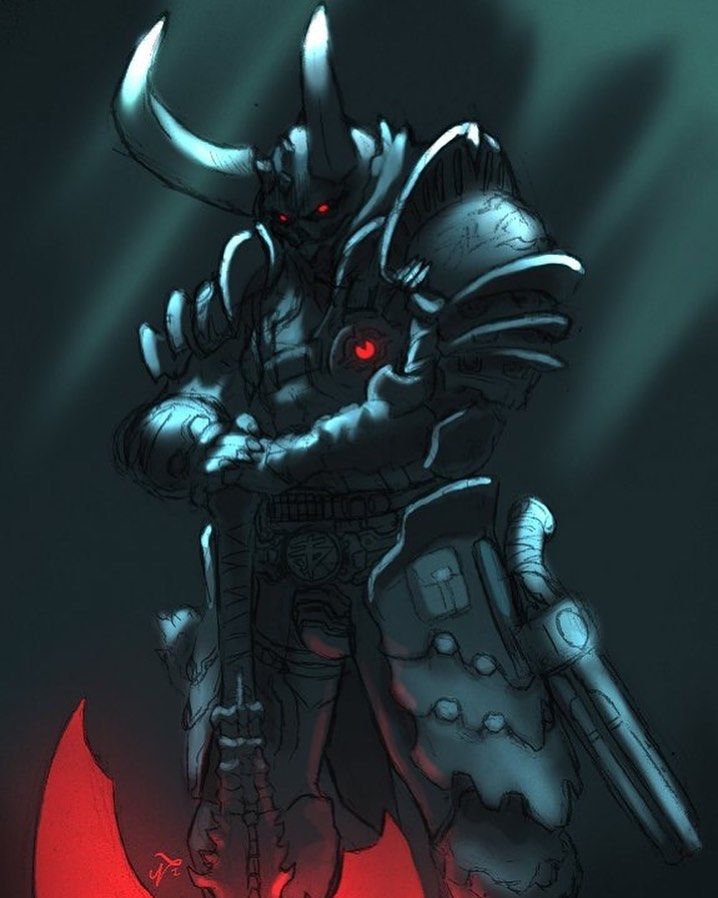 The Dark Harbinger Armor, is a suit of full plate armor that is jet black in color. When fully unveiled, the helmet has large horns on it, that curve upwards and are about half a foot long, with three much smaller spines centered between the base of the two horns. The rest of the helmet holds a demonic visage, with glowing red eyes that offer superb dramatic effect.

The collar of the armor is large and covers the mouth of the helmet before extending out to large shoulder pads on both sides. The one on the left however being significantly larger and covered with ringed spines. The one on the right is similarly designed just smaller. These shoulder spines proceed into metal gauntlets that cover the forearms and hands. The chest plate is normal looking for the most part except for a glowing light over where the heart would be, another superbly placed dramatic effect object.

The belt and lower half however is the most important, as when not in use the armor had the ability to fold into and out of the belt by pressing the symbol upon it's crest. The rest of the lower half consists of large thigh pads that lead into thinner metal braces along the legs and then into thick metal boots at the bottom.

Legend once said, that a human warrior once traversed timelines and dimensions. He apparently did so, battling the forces of hell itself for thousands of years. Not much is know about how a mortal being was able to survive so long and kill so many. But legend also said, that while trapped in one of the many hellish realms he discovered he forged this armor from the very fires there. Imbued with the blood and power of a million demons, it eventually made its way back to Earth somehow.

Many years ago, Raian then stumbled across it when he and his family were raiding some suspicious travellers. Since then the armor has sort of called to him, in a way, and somehow, even Raian is somewhat afraid of it's dark nature.

Health: 50 (no spec) | 100 (weaponry spec)
Trait: This armor was "supposedly" crafted within the fires of hell itself and the power of the demons imbued within it has given it the ability to reduce the power of chakra based attacks by 25 that hit it.

Will deduct upon approval