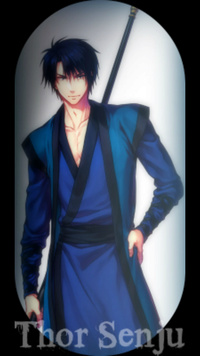 "C'mon Thor you really have to do better with this shit", He thought to himself. Once again he hadnt had the best of luck when it came to picking jobs lately , but it was still money being made so he couldnt complain. Every ryo earned was more he could add to his bank account , it wasent like he was rich and didnt need it. He was stuck with a mission that would require hi to be watching after someone kids today , baby sitter Thor was the role he would be playing today. He wasent big on kids and didnt really have the patience to watch the brats , but it wasent like he could just turn down the mission he had already accepted. He knew just a way to get around it though , and if it went as good as he hoped then the day would be a smooth one.

He got ready pretty quickly , not wanting to waste time in his home. He really wanted to get this day over so that he could use him time doing more important stuff , like training and pushing himself past his limits to reach new found strength. Instead though he had a job to do , one he would treat as serious as he would any thing else he put his mind to. He only took it serious cause he wasent in the mood to listen to kids crying the whole time he was there. If it was up to him he would have to in a genjutsu and have them just relax until they parent returned. Unfortunately for Thor he was terrible at Genjutsu , so putting the under that wouldnt of worked.

He left his home in a sour mood due to the circumstances, but he tried to atleast put on a smile for the mother and kids he was about to meet. After about ten minutes of walking he arrived at a home in Kumo more prominent district to a nice two story home. As he walked up the steps leading to the front door he gathered himself and put on his best fake personality. He didnt want the mother to fire him immediately or something. Before he could knock on the door , someone opened it. After a slightly conversation , it turned out to be the mother who opened the door to see who Thor was walking up her steps. She had happened to see him as she walked pasted her living room window. They talked for a while as she showed him around the house and introduced him to the kids.

Once she left Thor wasted no time in putting the kids in their room so he could summon a wood clone to finish off the job for him. He didnt feel like dealing with the annoying and stuck up kids that he was left with , instead have the clone deal with it. It wasent like he would mind anyway. The clone finished off the job in a wonderful fashion and returned back to Thor with his money before disappearing