[MISSION] Teacher For a Day 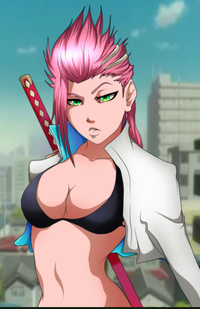 [MISSION] Teacher For a Day


Lara sighed as she walked down the street a piece of paper in hand “you’ve got to be fucking me?” she would groan out as she hung her head sulking , ‘teaching at the ninja academy , even if it’s for a day i feel like this is gonna be absolute hell’ the pinkete would think to herself as she proceeded down the road. If she were to be honest if she wasnt getting paid she’d probably have thrown the letter in her fireplace  , and claim ‘she never got it’ kinda like her eviction notices from past complexes she stayed in during her youth. “It’s just one day it wont be that bad hopefully , get in , explain how ninja ranks work then get the fuck out pass go and collect two hundred dollars” she would say trying to motivate herself.


When she got to the school she was shown to the front of the class by the teacher , the teacher was a slightly older gentleman who’s hair had become silver with his age ; that wasn’t to say he didn’t age well. “Today the office of the raikage has provided you all with a genine to ask questions , as you all know you will soon become genine and then you’ll be off to the chunin exams….” he would pause the room was dead silent as most of the boys seemed to be honed in on lara’s exposed chest , while a few girls in the crowd had mixed responses . As the teacher continued on with his lecture lara would internally cringe as she felt the rooms humidity rise followed by quite a few male flushed faces , and mixed looks of disgust or admiration from the female students.


Lara was soon snapped back to reality as she heard the older man speak up a bit clearing his throat , “miss hyperion the floor is now yours” he would say bowing and slowly hoveling over to his desk where he would plop down and give a sigh of relief as if standing was a burden upon his body. Lara would clear her throat and leaned her back against the chalkboard “well i don't just wanna go on rambling so how about you all just ask questions and i answer them? Sound fair?” this got a rise out of class as they began cheering and shooting off a tirade of questions she could have sworn someone said “what are your measurements!!”


It didn’t take a genius to figure out this would take a little more organization , once she had the class settled down she would begin again but this time with hands. “What type of missions do genine go on?” a small girl with freckles and thick glasses asked a lisp hanging on her voice , Lara had to mentally force herself not to laugh at the goofy looking girl “well miss specs they are typically sent either on D-rank missions, which are almost entirely risk-free jobs of manual labour, or, rarely, on C-rank missions, which are a cut above that and begin to verge on real "ninja" work that have a very low possibility of risk to the ninja involved.” she would state matter of-factly before moving on to the next child.


“Are genine the weakest ninja or is it just rank thing?” a boy would ask from the back of the class , lara like machine would begin formulating a response “Well that's hard to determine because then you have to look at what makes a person truly strong , is it jutsu? Is it muscles? Mental fortitude or is it having a monstrous boatload of chakra? A shinobi's rank doesn't necessarily reflect their abilities for instant the seventh Hokage of the leaf village was a Genine his whole career.”  she would finish before moving onto the next child.


“Why are you dressed like a woman of the night??” this caught her off guard not the question but because of the way it was phrased “for you female ninjas I'll say this , seduction is a powerful tool now moving on..” she would hurriedly switch topics not wanting to discuss her choice of clothing as she thought it made her look like a badass. She would begin drawing detailed diagrams on the chalkboard closing off question time “Genin are put in four-man cells, or squad, consisting of three genin and a jōnin-sensei, in order to learn teamwork and experience true ninja life under the supervision and protection of an elite shinobi. The make-up of these teams is based on the individual skills of the genin, so that there will be a balance between the teams…” she would turn to face the class


“...so in a lame mans terms, even the people who fail their aptitude test will be paired with two people with big brain energy , my advice to you would be this ‘never be content and be hungry for knowledge as it is power” with that she would place the chalk down and take her leave of the school not wanting to stick around another moment. Lara would hurriedly make her way to the office of the raikage to go and collect her check , she’d be damned if she was called a prostitute and not paid for her emotional damages. One thing had been made clear to her though little over half that class was not going to survive the chunin exams , ‘I wonder if any of those brats will prove me wrong in the long run?’ she thought to herself as she entered the door to the Raikage’s compound she would approach the front desk slapping down her letter and holding out her hand “my money now please” she would say with a rather chipper smile.

Re: [MISSION] Teacher For a Day