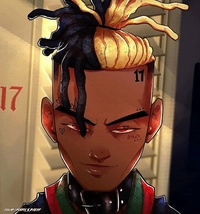 
Rayul's 3rd mission was the most anticipated one he's had thus far. He was tasked with apprehending some young boy, whose been causing minor mischief around the village with graffiti. Hoping that some form of a fight will be present, he wakes up at the crack of dawn and starts his traditional shadow-boxing for an hour straight. His Sharingan was recently awakened, and the Shinobi's eagerness to constantly improve and hone his skills is through the roof ever since they activated. He revisits his home a few minutes before the start of the mission: Brushes his teeth, re-twists any loose dreads that might've untangled while he was asleep, and stares into the mirror at the rather charming Uchiha he was and is to be. As he smirked at himself, looking at every little detail on his face, he couldn't help but keep the focus on his eyes. "Maybe we'll get a chance to get some real tests in with some Genjutsu today." he expressed to himself. He didn't quite know if his future captive was more experienced than him...All he was told was that the kid had skill equivalent of an academy student, but Rayul's seen his fair share and has also heard countless stories of ninja who still ranked as Genin who were on the road to being the most powerful shinobi the ninja world has ever seen. He never underestimated any opponent, knowing that each victory AND loss could always be used as a learning lesson. As he goes forth today on this mission, he'll say on his P's-and-Qs no matter if the boy turns out to be a kid who can barely weave hand signs correctly for a Clone Jutsu.

He started as best he thought he should, scavenging the village looking for any signs of fresh graffiti along the walls of buildings and fences near where the kid was last spotted. Rayul sees past work of the vigilante and is rather impressed by the art skill this assailant had. "Whoever this Lil' guy is, he should be applying his artistic prowess somewhere else. This is some beautiful work." he thought to himself as he closely examined a mural on the side of a pharmacy near to his home. As he kneeled, going left to right along the wall, he notices that a section of the graffiti is still wet as his fingers slide across the bricks. Looking at his now multi-colored fingertips, he knew the kid had to be close by. Instinctively he looked towards the rooftops. He had heard the guy had a knack for roof running and was rather quick with it as well. No sign of this Prankster in view, but he expected the kid to be gone by now anyway.

A few more hours have passed and leads were running dry. He found a few more fresh graffiti locations, all of which showed no sign of the prankster, nor did they give a clue on the direction in which he ran. Walking over a small bridge, he heard laughter from his left side, close to a park, and spotted a group of children huddled near a back-alley wall. One boy was fully clothed in black attire: a Black hoodie with matching jeans and black boots. He couldn't see what they were doing but noticed a rather odd motion... The kid seemed to be shaking something in his hand. His suspicions arose and were soon confirmed as he watches the kid throw an empty spray can across the same fence they were in front of. Rayul smiles to himself "Gotcha punk...", he mumbles to himself, as he lifts his mask over the lower have of his face. Rayul hops over the side of the bridge and lands with precision. "Hey!" he says before the kids turn around startled. The graffiti bandit instantly knows what's about to happen, and takes out running! Rayul wastes no time taking after the jokester.

They turn into an alley and run alongside the street, cutting through different walk-in bars and over and under a few local fruit stands. This little guy is quick, and all of that smoking Rayul does daily isn't helping him outrun this 4-foot baby criminal. The chase goes on for about 12 minutes before Rayul starts to understand why nobody could catch this kid. His skill in chakra manipulation was pretty good! They reached a bookstore and thinking he would be able to corner the guy if he ran inside, Rayul watched the kid scale the side of the building with ease, and take out across the roofs. "Shit!" he groaned, as he started up the wall himself. Hoping roof to roof Rayul screaming and yelled and the boy, telling him that it's best if he gives up. "I'm gonna catch you eventually kid! Even if I have to Lightning Style you off these roofs!" While running, Rayul reaches into his weapon pouch and pulls out a Smoke Bomb. He throws it a few feet in front of the kid, and the dense smoke covers the area in which the Prankster was running. The young boy stops, not knowing where to run, looking for an escape from the approaching Genin after him. Rayul catches up, near out of breath, and talks while trying to catch his wind. "I told you....I'd catch up to you...eventually kid," he says as he gasps after every few words. He regains his stamina rather quick and has a standoff with the boy as they look at each other face-to-face. The boy turns around for a brief second, looks back at Rayul, then turns his head back around. Rayul looks past the boy and realizes what the kid must be thinking. His facial expressions show signs of annoyance, as he looks at the little ninja and says "Aw come on bro. I've chased you enough don't you even think about doing-" he beckons before his sentence was cut short by the boy leaping off the building. "Damn it!" Rayul yells while signing out Ram → Snake → Tiger with his hands. A Clone appears from a mist of smoke and kneels with its hands out motioning for Rayul to get ready to be thrown. He puts his right foot into the clone's hands, and with an uplifting motion, the clone tosses Rayul forward off the side of the building with quicker speed than he would've had to try to run by himself. Rayul keeps his hands on his side to gain more momentum as he free-falls after the boy, and catches him mid-fall halfway down the side of the extremely tall building. Rayul uses chakra to allow for a balanced landing as they reach a balcony a few more feet down on the side of the building. "I got you now, you little shit," he says as he ties the boy's hands behind his back using his jacket as a makeshift rope. This took longer than he thought it would and proved to be more of an advanced mission than he thought, but never-the-less the mission as a success.

Rayul carries the kid on his shoulder back to the Academy, where the recruiter of the mission is waiting for the return of Rayul and hopefully the kid he was sent to capture. As he makes his way into the building Rayul sets the kid down beside the teacher, and tells him about how much of a hassle it was trying to catch the guy. He also scolds the kid, letting him know that his talent was way too great to be wasted on just tagging the village with "cool drawings". He unties the Prankster and puts back on his jacket before receiving the Ryo he was promised for a job well done. As he leaves the building he takes time to reflect on the day he had and takes every little detail on how he was able to achieve completion into consideration as he returns to his Aunt's home for some more of her Cheesy-Raku Ramen. Maybe he'll get to read a little more about this "Lightning Clone Jutsu" he thought would be a major improvement to his E-Ranked version of Clones.
-----------------------------------------------------------------------
Total WC: 1,362
CLAIMS:

Re: [MISSION] Capture the Prankster [MISSION]

Awesome writing man, keep it up <3