Oh thank goodness, he dodged! Akki had very little time to breathe a sigh of relief as Akarui came running towards her! Her eyes grew wide as she saw him and wasn’t sure what she should do! She had to dodge this move quickly! No room for error she had to run and dodge this move then come up with another move. Looking at him she immediately dodged him and made a hand sign to create a river of mud flowing from around her! The worst it will do will stop him or slow him down. It wouldn’t hurt or drown him. As usual she knew the limits and the difference between a spar with a friend or fellow leaf ninja and an actual battle with an enemy!

She looked down as the river of mud flowed around her and toward Akarui. She wondered what was going to happen, would he slip and fall? Would he dodge it somehow? Would he avoid the attack all together? Or would he get swept away? She doubted he would get swept away it was not deep enough. But the blue haired Senju knew this was a good move to make. Expect the unexpected as a ninja, and learn from every experience! 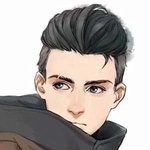 Akki dodged like Akarui hoped with his claw hand missing her by inches with her shuttling to the side forming a hand seal as she landed. Immediately the ground started to liquefy into mud in a 10 metre radius around her like a torrential river clearly meant to trap Akarui as he approached. As Akarui instantly speculated, he landed on the mud suffice and began to sink up to his knees. Against a Close quarter fighter, sealing off their movements was standard tactic but highly effective.

He tried to pull his feet out as soon as he landed with minimal success only releasing one foot. The strength of the mud equal to his own so he needed more time to get out. “Good move, but what will you do if you can’t see me?” Akarui called out stalling for time as his hands rapidly made a Tiger handseal.

The moment it was complete, his body seemed to explode into mist out to 50 meters! Using the distraction Akarui pulled his other leg out and darted off to the side. ‘That was close, she nearly immortalized me. This spar is really showing me where I need to improve. Let’s see what she else she can do.’

The mist started to thin as they had sparred for the remainder of the day each displaying the moves they needed to practice in order to improve them even if only a little. Polishing their techniques was a crucial aspect of getting stronger. If they never improved themselves, they wouldn’t ever be able to reach their goals if they didn’t push passed their old limits. Using all their moves, they clashed several times to test the weaknesses in all their techniques which was greatly beneficial. That’s what Akki and Akarui did for a while before each ran out of chakra. After which they would start again trying to use different tactics than their previous bouts trying to gain advantage over the other.

Akarui had learnt a lot from these sparring matches against Akki. She was a formidable opponent who tested Akarui time and time again. For his first spar in quite a while, this was well worth his time. While training alone did have its benefits, nothing compared to having a second person training with you to bounce ideas off of and test out ideas on. It also showed how others think during combat which was exceptional useful to keep in mind for future fights Akarui was bound to be involved in. As well as taking on an opponent with different fighting styles as well as element to his own. Any experience helped Akarui further along with his aspirations on becoming a powerful Shinobi in his own right.

The day continued this way until the sun started to set and the moon was peaking over the hills in expectation. Akarui found himself panting under a tree from the intense sparring season he and Akki had just been undertaking against each other. After catching his breath, Akarui stood up to now stand in front of Akki before giving a cupped fist bow from the waist while thanking her for the spar.

“Thank you for being my opponent today. It was quite enjoyable to say the least. I hope sometime in the future we can spar again. But for today, I’ve got to get back to prepare myself for upcoming missions. Good day Akki Senju, I do hope to see you again.” Smiling at the blue haired Senju, Akarui said his goodbyes before turning and making his way down the hill from the Hokage faces monument. He was in a rather great mood after the days sparring so he headed home with a song on his lips and a smile to match.

((OOC: Sorry to abruptly exit, planning on going out of the village so I need to exit all Konohagakure threads. Happy to thread again when Akarui returns to the village))
((EXIT))

Akki nodded at the boy as the mist began to clear, he had to leave,but so did she! Her parents were rather strict on her and her whereabouts these days! "I will see you later!" She said with a smile!