Zyxis nodded. "Do a barrel roll!"

Hoshi knew what would happen next based on their previous fight, Ryuka would unsheathe the blade and attack him. If Hoshi wanted to reach Ryuka before that he would have to change his approach and use the technique split second to dash right into the Ryuka ,Who had to stay in range if he wanted to pull out his blade, not only trying to headbutt Ryuka but tackle him with all of Hoshi's might [60 power 100 speed], Yet if this failed to hit Ryuka and he didn't turn into smoke Hoshi would decide to hop backwards and wield the sheathe alike a weapon with a impromptu stance. But if he hit Ryuka then he would be prone on the floor with sharp pain all over his body with even fractured bones. Thought if Ryuka changed his body into smoke Hoshi would put his hands together in a unique hand sign. Not yet using seven heavens breathing technique. 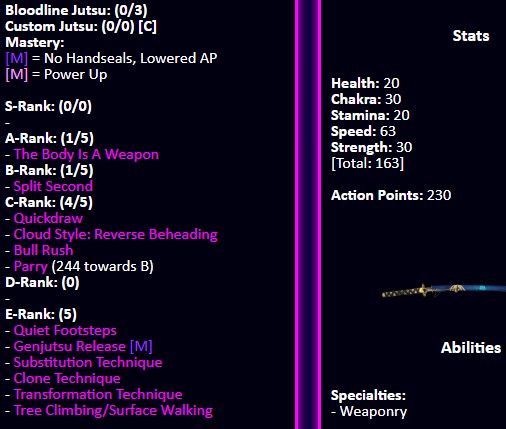 Ryūka, ready for a speed boost for a long time now, reacted to the change of Hoshi's speed almost instantly, using a technique of his own to match his speed. He dashed back, with greater speed, and even a greater boost than Hoshi. When they were near the end of the range of the technique they used, Ryūka had opened a 2 meter distance between them. Hoshi's headbutt would get further and further from Smokeperf as they dashed, instead of getting closer.

When both of their speed boosts ended, Ryūka just kept waiting.

The main challenge of this spar was clear to Hoshi. Simply put Hoshi could never get anywhere close to Ryuka as he could easily keep back peddling as they kept fighting. So Hoshi needed to be the patient one. If Hoshi could never catch up to him the solution would be simple. Ryuka would need to attack him without being in trouble himself. So to build up time Hoshi threw Ryuka's sheath at him , with the sheath wide ways, which surprised Hoshi how fast his throwing arm could be... But even so Hoshi needed to prepare himself for Ryuka's next move after dealing with the thrown Sheath ,aimed to simply hit him hard enough to wind and floor him, [ 85 impact force, 100 speed].

With the sheath thrown at Ryuka, Hoshi would next put his hands together to unleash his strongest taijutsu. Seven heavens breathing technique. And in one feel swoop Hoshi's eye's became white with a yellow aura around him. You would call him a super saiyan if it weren't for the darkened flesh that came with such a technique. With the technique performed he only had one choice. Sucker punch Ryuka right in the gut and make him feint quickly before the technique exhausted him completely. [150 power, 143 speed]

Well, Zyxis had to accept the facts. As Hoshi's pupils disappeared and a red tint took over his skin, the aura that permeated off of him made him realize that he wasn't stronger than him. Hoshi was a hard worker, he was the complete opposite of a slacker. As soon as he saw his rival become stronger than him, he moved to also reach that level. The white-haired boy looked down at the grass in disdain. Even after all of his training, the help he received, the jutsu he learned, he was still the weakest. And his teammates were aware of that. They didn't mean to tease him about it, but he had fallen behind.

The boy stood up and began to walk away. He wouldn't leave the training grounds, only head to a tree about twenty meters away from the fight. He started to brainstorm on what he needed to become stronger and to reach the level that Ryūka and Hoshi were at. He already had a set amount of goals of what he needed to do. First, he needed to finish understanding the Wind Element. Sure, Ryūka would be able to teach it to him, but it seems that he forgot each time. Zyxis decided that he might have to do it by himself. Once he was done with that, he would go learn how to manipulate water. Now it was severely challenging to learn three elements at Genin, it required twice the amount of work for a Genin to do it rather than a Chuunin or Jounin to do it, but he wasn't worried.

After he learned that, he wanted to learn Storm Release so he could learn even stronger jutsu. He still had enough chakra in him to learn another A-Rank and a bunch of B-Rank. D-Rank didn't have any effect on him, but after he learned all the jutsu he needed, Zyxis was aware that he needed to learn some skills as well. He had wanted to learn Chakra Infusion and Chakra Sensory for a while now, but never got to it. His mind was always going, thinking of the next way to get stronger, how to improve more than he had before.

Would Ryūka believe him if he said he was holding back during their fight?

The sucker punch completely missed, And yet Hoshi had not given up hope as Ryuka decided to challenge him after Hoshi went offensive. Hoshi couldn't just let Ryuka take the win at this moment and a good way to make sure of that would be to dodge Ryuka's assault. Through the help of the seven heavens breathing technique Hoshi was at least able to see Ryuka's movements if just barely [113 speed +60 and +10 (Skill) RT=183]. The difference in speed was great but Ryuka would still be unable to land the decisive blow as Hoshi could only barely turn around in enough time to block the blade with simply his arm , Taijutsu style block A rank, reducing it's effectiveness to null against Hoshi [50 power]. Yet with the blade in contact with Hoshi's arm he would simply push it with his maximum strength [120] to try and make Ryuka lose balance and even lose the blade to ,which if he indeed lost the blade of his balance, Hoshi would react by attacking with Nukite the spear hand C rank to simply strike the temple. The speed of the attack would remain maximum but the strength would be reduced to not kill Ryuka or permanently wound him [133 speed 140 power *will use less to not kill*]

Thrill of the battle , Ryūka could still take the time to appreciate how much Hoshi had progressed over the time they knew each other. Ryūka, seeing the counter to his attack, dashed out once again, and as he did, while Hoshi was in range, used the Reverse Beheading Technique, attacking Hoshi without having to face him. This way, he would both avoid Hoshi's attack, be attacking him instead from the opposite direction with greater range and speed, and at the same time he would be moving away from Hoshi.

Steam rose off Hoshi as Ryuka managed to dash back and still had complete balance. The planned attack did not occur because Ryuka would easily dodge it. But now Ryuka was simply trying to attack him with a swift and powerful motion as he retreated. This blow would slice against Hoshi's chest. Causing extreme amounts of pain and rapid bleeding. Definitely enough to leave a scar but never be a permanent injury. As the blow landed the seven heavens technique faded and Hoshi stood still and with a a final hearty breath "You win Ryuka and sorry Zyxis but I don't think I can.. Spar you like this" Before stumbling around, Not complaining in pain about the injury to seem more powerful to Ryuka. He would likely go to the hospital by himself after taking an injury ,non life threatening like this. But on his way there he tried to think of how to match Ryuka. Thinking of what if's. If they encounter an enemy stronger than Ryuka they could all die. Hoshi needed to become stronger, Thinking of a certain technique that he could try to learn at a library once he recovered. Off screen.
[EXIT]
[TWC-5720]
[Claiming- +28 stats (20 in strength to learn next skill), Eight Inner Gates Skill 2000/2000, Gate of opening 1000/1000,  Gate of Healing 2000/2000, Early Sacrifice 4000/4000 (3500 from refunded jutsu, 500 from current thread.), Gate of Life 220/3000]