Task: Hey you. Yeah, you! It’s that one guy you pissed off in a bar that one time. Oh, no, he doesn’t look too happy. On top of that, seems like he brought a few friends. Let ‘em know that you don’t scare easy.
http://naruto-role-play-rpg.forumotion.com/t37988-contract-unfinished-business

The bar remained largely quiet as Amaterasu Akari sat in her usual spot on her usual stool. Wordlessly, the bartender poured her a glass of water- he knew better than to offer her alcohol when she was in this mood, after all. Rain was pouring harshly outside, and thunder crackled in the heavens. Her clothes dripped with rainwater. They slowly dried up in the cool air of the building, and she shivered. The young noble hated being cold. She had only come in to escape the rain, but she was having second thoughts about the rebuilding of Amegakure no Sato as well. Would she really be strong enough? Would she really be able to rack up enough support with any potential allies that they'd be willing to follow her to that extent? She sighed and moved the cup in a circular formation, sloshing the water around inside the glass. She only knew two A rank jutsu, and most village leaders had many, many more of every rank- S included. Would she be able to learn an S rank? She knew that she couldn't at the moment, but she also knew she was nearly at Chuunin level- well, C rank missing ninja level. Most chuunin were capable of learning an S rank, so maybe with a bit of practice she could as well? It was worth a shot. Hell, recently, she'd found an interesting assassination contract in swamp country that involved killing a small village leader. It didn't look too hard, but it looked challenging enough to keep her on her toes. Perhaps she could try it later? She yawned slightly, looking back down at her glass. It sparkled in the candlelit bar. Dark red eyes narrowed and blinked. What was that? She could have sworn that she felt something just now... Subtly, she angled her glass to see the reflection that was behind her. There were three men, one of whom had a deformed face. Was this the man she had used Iron Claw on...? Were these his friends? They didn't look to happy.

But if they weren't going to try anything, there was no need to initiate unnecessary violence. She kept the glass positioned at that angle, keeping a careful eye on the group behind her in case they decided to attack. She yawned slightly. She hadn't rested that well last night. The thought of the civilian rescue mission weighed heavily on her mind, as well as the prospects of starting a village. She knew she wasn't ready right now, but perhaps later? She shrugged to herself. What the hell- she shouldn't focus on that heavy stuff right now. All she needed to do was focus on today and tomorrow. She'd probably pick up another fire jutsu, just to be safe, before moving on to the assassination contract. Who knows? That might be the little push she needed to move up to C rank in the bingo books. She decided to get started on it after the mission with Andalusa.

Suddenly, she sensed movement out of the corner of her eye. She looked down to the glass briefly, and when she was sure that the bartender wasn't looking, activated her family's doujutsu- the Golden Eye. The figures reflected in her cup were starting to advance towards her with clenched fists. She couldn't afford to use any fire jutsu indoors, but that didn't mean she couldn't use any others. When they were about a yard away, she jolted up from her seat and whipped around. One of the three men flinched. Good. Quickly, she formed the Dog seal with her hands, and watched as smallish branches of white lightning exploded out of her open mouth. They struck one of the men on the left- specifically, the one who was flinching. He had brownish hair, yellow eyes, and a pale complexion. He wasn't built particularly impressive, and perhaps his most notable feature was a missing tooth. Electricity arced across his body, and he collapsed twitching to the wooden floor of the bar below. One down, two to go. She eyed the man with the squished face and the remaining one who was standing up. They were eyeing her warily at this point, knowing what she was capable of. A pair of shoulders twitched, and she brought her hands together. No punch was thrown her way, however- perhaps they had thought she was going to attempt another jutsu or something? She shook her head. An eye twitched. Amaterasu straightened her posture. Suddenly, a foot came flying out and connected with her shin. It stung wildly, and she just barely managed to duck beneath a swung punch from the squished face guy. She grabbed the barstool and swung it out in an arc in front of her. They managed to stagger back, but that was just what she needed to win. Now that they were further away, she dropped the stool and brought her hands together once more for a relatively wood friendly fire jutsu- the Piercing Darts technique. After she had formed the Tiger hand seal, six magnificent needles of pure flame coalesced out of thin air. Wordlessly, they shot forward at both of the men- three to the left and three to the right. They intended to pierce non fatally, specifically around the legs and arms. They would hurt horribly and leave nasty scars, but as long as they were treated properly they should be able to live in spite of said injuries. Once the jutsu connected, a pair of ragged yells and screams echoed through the building. Looking at the floor to see the electrocuted man still twitching, as well as to the wall where the burnt men were screaming bloody hell, she turned to the bartender and tossed him a few ryo. He didn't say anything back- he knew this was her way of apologizing. Without any further words, she decided to leave the bar. She'd caused quite enough trouble for one day, after all. Maybe she could come back later... 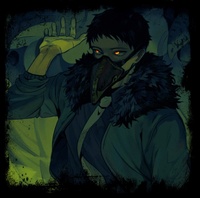