Just finishing up some work at the office, with nothing else left to do. He decided to go for a little walk. Nothing to serious just a little stroll around the village for the time being. As he organized all of the work on the desk. Made sure everything was neatly organized. After he got up from the chair, he went to get his jacket as he left the office. Just as he left, Shrimp saw the young Hozuki leave the office the other direction. As Kyson left, his assistant went to see if he was done the paper work. As he looked at the desk from the entrance, he saw that the boy was actually finished. he left off a smirk as he went to go pick up the work and turn it in. As for Kyson, he left to continue his stroll. looking around, seeing a bright sky and feeling the nice warm calm weather.

It was definitely a good day to just look around. He began approaching the training grounds, he looked over to see if anything was going on at the moment. He noticed a few young shinobi sparring with each other and honing their own individual skills. The ambition to get stronger, the young Hozuki hasn't felt that in a while. He's been so busy finishing the work for the Raikage while he was gone. Hasn't really had much time for anything since he's been helping out. But he wasn't doing it for himself. It was for the village's own good. Seeing one of the young shinobi focus on their chakra control by themselves away from others. It reminded Kyson of himself. He used to be so anti-social when he was younger. though he wasn't too talkative now, he socializes and speaks up a lot more now than he ever did as a kid. He stood there leaning against a rail as he closely watched the young kid. He remembers the time him and Royalty first met here. Thinking about makes him smile a little. The two barely knew any jutsu at the time. Kyson tried to fight him in a spar but realized he couldn't match him when it came to fist. But it was back when things were a lot simpler and he was ignorant to a lot of things going on.

He would like back towards the young shinobi as he noticed that he wsay, "you need as having trouble helping the young one. As he hops over the rail and walks over towards him. The young genin isn't noticing him since he's too focused on the control of his chakra network. Kyson would calmy say, "You need to relax and clear your mind before you go on...." The boy would be a bit startled as he approached him at first. But he slowly went back to himself. "I am calm, its just not working." The boy said with a bit of an attitude.

"I can tell just by looking at you and your body language your now calm at all. Like I said, clear your mind and try again." He would say. As the boy tried again, He closed his eyes as he meditated and slowly began to clear his mind. As his thoughts started to go blank. He could feel the chakra around him starting to build up a lot more smoother than before. The kid definitely felt a huge difference this time than his last attempt. "Hey, thanks mister it actually workked this t-" The kid said as he opened his eyes and looked to see where Kyson was. But he had disappeared. The kid looked a bit lost as he looked in every direction to see if he actually just wondered off that quick. He scratched his head as he was very confused about who he even met. But he shrugged and continued his chakra control training.

Kyson had now exited the training grounds and continued his little walk. He wasn't sure where he was going exactly, he actually had no plans on where he was going. He just walked around the village until he saw something exciting happen. But then he began to get hungry. So he decided to go get some dumplings from a shop near him. Remembering the closest one to him, he headed that direction immediately. As he was walking, he thought about things that could benefit this place. But there was so much he had to do before then. It was hard to think straight. He wasn't really a fan of running the village. he rather did things behind the scenes where he could just work without having everyone asking you for things. But there was nothing he could do about it at the moment. he had to play the hand he was dealt and move on. He wondered what his parents would think. Seeing where he was now and how his life turned out. Would they be mad or would they be disappointed. He always wanted to know the answer for himself. Some of the choices he made probably weren't the best ones, but it was what he thought was best for him.

As he reached near the dumpling shop, he walked over towards the counter and told the owner what he wanted. He ordered 2 orders of dumpling. As he waited for them to be ready, he looked behind him with his back facing the shop. Just letting his eyes wander around the village. Few minutes later, his order was finished and he would hand the man his money as he was on his way. Walking away while eating the dumplings. After a good time strolling, he thought it be a nice time to just call it a day. So after he finished his dumplings, he though away any trash he had on him as he began to head back home. It wasn't a bad day of work, but he still had more stuff to finish up the next day. So he was off to rest till the next day. 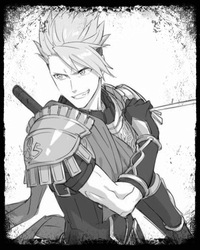 Re: A little stroll