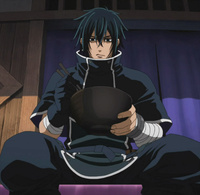 It would seem as though the guy had taken their advice and would rush to change his seat. Renji would lose sight of him in the crowd. As he shifts his attention back, he would see that he and Max had caused quite the scene. Everyone was looking at the two shinobi, probably thinking them to be bullies or something. Renji would not care though. None of the civilians knew the sacrifice that they made everyday, they did not know the feeling of going on a mission and not knowing if it will be your last, no they only knew the safe and comfortable world, the shinobi sacrifice everything to provide for them.

Despite the guy moving, Renji would still be standing their like a bulldog protecting it’s family. It was not until Max put his hand on the young Hyuugas shoulder, and Sakana offered them popcorn, that Renji would snap out of his zone. “sorry bout that guys.” Renji would say half embarrassingly before going to take his seat in the row below.

As he is sitting in his seat  ready to watch the action, Saya would say something about finally getting to see reizo in action. Renji could not lie, he actually was looking forward to seeing the blonde haired jounin in action, he had heard that Reizo was a taijutsu practitioner, and Renji wanted to watch and see how he fights so that he could pick up some tips. “yeah, I can’t wait for it to start too. I want to see Reizo’s Tai and how he uses it. Though, I don’t know, I feel like Konori may win this,  I mean he is the champ.” He would say to his teammate before turning back around in his seat and getting back to watching the fight.  But before turning back around, Renji would take some popcorn from Sakana, thanking the boy as he does so.

Saya would immediately tell Sakana that she was fine, it was the answer he expected. She wasn’t the type of person to say something was wrong even if she had been seriously injured. It was admirable yet bothersome, it was always okay to ask for help. “Alright… good,” Sakana would say was a skeptical tone. She was beginning to know him really well.

After that Max and Renji would both apologize for their actions against the rude man. Sakana got why they were angry but violence wasn’t always the answer. Sakana wouldn’t respond to their apology with a verbal acceptance but instead with a nod of his head.  Renji would then grab some popcorn out of the bag and they would all turn to watch the fight.

The Meijin didn’t really know much about Reizo other than he was a jounin in the village and that he was friends with the people he was friends with. So watching his fighting style would be interesting. Sakana knew how Komori fought so he would probably predict what he was going to do.

From what felt like a pit in his stomach he heard a voice begin to speak. “Trivial games with you humans. Fighting for sport, how nice of a luxury.” The boy recognized this voice to be the three tails. He was awaking from his slumber more and more recently, Sakana felt his chakra have a stronger presence in his everyday life, as if the two were fusing more and more as the time went by. He didn’t really know how to handle it, so he left the beat’s side comment slip away.

Everyone had seemed to be quiet for a bit (or at least Max hadn't heard them) as the young Chuunin focuses intently on the battle going on. It seems... like the fight is already over?

That was disappointing... Max came here hoping to see a good match. He had hoped to actually learn something from this bout, but all he managed to learn was how easily he could be disappointed at these fights.


Max would simply tell his friends goodbye before heading back to his home. He still had a ton of work to do and he needed something else to occupy the time he set aside for a good show. Hopefully the rest of his friends didn’t mind his abrupt exit but such simply had to be done.

Time was passing, once again it seemed as though months had passed when the fight in actuality was over in moments. Komori was victorious once more. The crowds cheered and it was over once more. The crowds started to spill out, Sakana would say his good byes to everyone he was acquainted with and then headed home again. He was certain there would be more fights to come, hopefully the next one wouldn’t be so short.