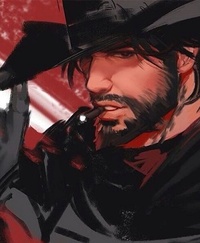 Although short lived, it had been well worth it to leave Konoha for a bit and visit Kumo. He hadn't actually visited much of the village to be honest. He had gone to see an old friend of his from Suna. He knew his time there would be limited. Being away from the village for too long just weeks after being invaded was never a good idea. It would likely bring up suspicion from some of the Kiri folk, which he was entirely prepared for. He was simply going to tell them the truth. He saw no reason why he shouldn't. But that was a problem for Kinzoku to deal with once he got back to Konoha. Now he thought back to the brief interaction with Nobunaga. They had gone to the peak of a mountain top, a spot Nobunaga had said he often went to. Even though Kinzoku hadn't gotten the chance to check out the village, he felt like he got a good look at the village in its entirety from the top.

The two former Suna shinobi did little catching up, merely seeing what life was like in their new homes. One joining the village of Suna's ally while the other joining the village of the 'enemy'. Each one had their reasons and could not be faulted for their decision. So when the two finally came face to face for the first time since the incident, they didn't speak much about it. Instead, they continued a spar they had started back in Suna that they didn't have time to finish because they both needed to part ways. The time between the first spar and this one was enough to have allowed both of them grow in strength. As a result, the spar itself had been a lot more intense than it had been in Suna. It put Kinzoku in a better mood than he had been in since the attack on Konoha. Seeing an old friend and having a good fight could do that to a man. Though the trip was short lived, and now it was time for Kinzoku to make it back home.

By now he would be just outside the swamp lands surrounding the village of Kumo. The area was still quite bleak with the sun shrouded by clouds making it difficult for its rays to reach those on the ground. Although the day was dark a quite frankly ugly, it still beat being out of those wretched swamps. Nothing he had ever seen looked or smelled as bad as those swamps did. Kinzoku understood the tactical advantages to having a village built surrounded by such a terrain, but it was still relatively extreme. At the moment the Konoha Jounin was resting against a large boulder in an open plain with Peacemaker laid out across his crossed legs. He was taking a little moment to gather himself as well as think what he should do when he gets back home. He knew he was going to be assigned to a squad with three genin. Though he did not know who they were going to be. He had already kept them waiting long enough however, so it was past time he got back and attended to them. But he needed to be prepared for them, have something in mind for them to do. It was all nice and dandy having a team under your protection, but if you weren't prepared for them and didn't have ways to make them stronger ninja and better people, then what was the point of it all?

As he sat there pondering and running through ideas, a slight small took shape. "I've got just the trick" he said to himself as he grabbed Peacemaker and slapped it back onto the magnetic piece on his back that kept the crossbow in place. Quickly rising to his feet, after padding down some of the dirt from his clothing the Nazar began walking back in the direction of Konoha. Reaching into his jacket pocket he pulled out a small package containing some form of food, a high source of protein. It wasn't much but it was enough to keep him going the rest of the way. Once done he crumbled up the paper and slipped it back into his jacket pocket. Yea that's right, Kinzoku doesn't litter. After a quick stretch extending his arms into the air to stretch out his spine, the Nazar began to run across the plains. In a matter of moments he had picked up the pace and was running at top speed. It was about time he got home and he wasn't going to get there by walking.