'You must specify a subject for your message' IO. 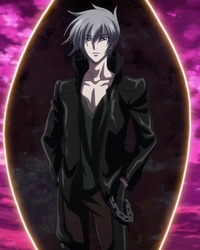 Gin would watch the man take his fire chakra orb within him, choosing option A obviously before transforming his staff into a rather large platform and walking up it to sit down in a meditative stance in the middle of the platform. Gin would proceed to climb it as well, as with the staff so high and large he wouldn’t be able to SEE Mo-ri practicing and he didn’t have the ability to sense chakra yet, so it would be impossible for him to know if the strange eyed man had completed the training or not. As he reached the top of the platform he would watch the man begin to meditate deeply, working the chakra through his body as slowly an aura of orange fire would surround him, showing his completion of the technique. After that Gin would assume the man would come off the platform, resizing it as he went and hop off himself. He would land on the ground just a moment or two before Mo-ri would and the ‘platform’ would again become a staff.


“Well done.” He would say with a smile as he got a closer look of the aura. “Your fire chakra is strong, I’m impressed.” He would say before fully turning to face him, cracking his neck in the process. “Let’s start with some techniques. I’ll teach you everything I can if you’re interested but that’s up to you. One thing I will definitely show you is a simple E ranked technique called Inner Flame. It simply regulates fire chakra through your body to keep you warm in cold climates. It’s useful to avoid freezing to death as well as incredibly useful in being comfortable in some of the more… Inhospitable parts of the world.” He would say before forming a tiger hand seal and allowing the chakra to flow through his system. “Sadly, the technique had no real ‘tells’ to let me know if you performed it quickly. One girl I taught decided to kiss me to show me how warm her lips become to prove it, but I would respectfully ask that you refrain from doing so.” He would say with a small chuckle before shrugging at the man. “When you get warm you’ve got the technique down.” He would state before stretching and letting Mo-ri try the technique himself.

"Well i kind of just began to feel it as if it were like my lightning. Constantly surging but also took it as a form of life. Fire can give and take so its better to allow it to give before it takes from you. With that being said," he continued to feel its internal presence even within the deepest parts of his core, a smile forming on his face as he clenched his fists and began to focus it through more of his body. When the male had began to instruct him on the ways of the first jutsu he smiled and knew what the feeling of being on the brink of what would be your body completely freezing over and he knew that it wasn't pretty. A jutsu designed to keep even the comfortable undead body of his warm was music to his ears so he obviously took it.

From the point before he allowed the fire chakra to take over his body, slowly feeling the heated power creep into every part of his body (hurr hurr). As he slowly began to feel himself heat up, he also began to allow the fire chakra to over ignite, causing another reaction to cause in his body until he had been almost literally burning up. Though this wouldn't have been an outward indication that he was gettting it, it was more so because he was actually overdoing it. Feeling the difference he began to smile and brought his oven down until he was in a position where he was simply warm and he nodded," There we are....Had to overheat to be medium heated and now i think i have it. So what is next?," the male asked slowly allowing the heat to die down and his cloak now covering the showing parts of his body.