I'm not supposed to be here. Neither are they. 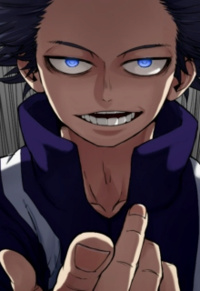 I'm not supposed to be here. Neither are they.

Nan was bored. Nothing really fun had happened yet, his entire time there. Had not met anyone terrible interesting, or at least, not talked with anyone. Just.... a bore fest. He needed a break from the boring. So he had decided to head to the forest preserve thing that he had heard about.

It was pretty and all, and Nan certainly adored the majesty, but Ciel was still bored. He could punch a tree or walk on water or throw some shit. He was pretty sure that he'd stumbled onto a training ground. But he was not supposed to be a ninja here. At least, not a good one. And that was an important part of his disguise, and why his chakra was being so heavily diminished. He kept enough to be able to do the bare minimum, but... that was it. No need for someone to come across him and instantly target him because he was an unregistered ninja. Though Nan kind of doubted that would happen.

It was while Nan was musing that the once sunny, clear day started to fade away. 'Twas neither cloud nor dusk that shooed away the light, however, for as he looked upwards, he was confronted by a sight most peculiar:

A fucking huge amount of butterflies.

The sun had blared through the cracks of his home like a revelation waiting to happen, the male stirring softly before rolling over to tell the sun "Fuck you more sleep" but it seems nature had other plans.The sun intensified as if he was an ant and the cracks were the magnifying glass, constantly burning into his skull until he hopped off of the floor and sighed," Alright ye wee little fucker i'm up. Shit I just want sleep for once in my unnatural life!," the words fell on deaf ears as he began to mumble quietly and get dressed. Today meant a world of new possibilities as he finished getting dressed and walked out of the abandoned building with staff in tow, eyes looking around as he wondered what he would do today. Nothing from the looks of it but a nice stroll meant that he could easily get around and look at the village more. From there he simply made his way onward out of the slums bypassing many of the naysayers of the shinobi in the village while keeping his own status to himself since...well he acted like a hobo.

His stroll took him toward the water gardens, a place he had not been to since the whole training incident and fucking it up but maybe...just maybe it would have been fixed. Knowing that he stepped in to see that it had been for the most part fixed and sighed a good sigh of relief before walking in fully," Looks a little better since someone decided to do a little landscaping...good good," he softly mused to himself as he continued on his way. Whether or not someone had talked to him was a different thing since he was a little to busy looking at the things that were going on...Were those butterflies?

"Hey!" Nan called out to the first person he saw, arm raised and waving through the air. This person happened to be Mu-jin. "Any idea what's going on?"

The boy would lightly job over towards the man.

"Is this normal?" he'd ask once closer, and therefore without having to yell. There were.. a lot of them. Like, a lot a lot. Probably thousands if not tens of thousands. And off in the distance, slowly growing louder, was a strong sound. The two boys may only just barely pick it up, for it's source was outside of visible range. But it was approaching. And it was approaching fast.

But the dull sound barely even registered with Ciel's unconscious, his conscious mind had yet to pick it up. Nan was still staring in awe at the sight above him.

...This was an epidemic of catastrophic proportions as Mo-ri simply stared for a moment wondering if he had truly gone insane or....was this simply reality finally playing a cruel joke on him. The males voice cracked him out of his stupor only giving a small shrug as he pointed and counted in his head," waaaayyyy to many to smash....I'm gonna need a bigger staff," the inward thought caused him to look at the staff and wonder what would happen if he did.

On one hand they could swarm him like a bunch of crazed chickens orrrr they would just swarm around him and annoy him. That brought on the question of if butterflies would eat a person.... probably not unless it was just some giant mutated summon butterfly....then he might be eaten.

When the male had came over his head turned to look at him, the eyes going from the swarm to him and back to.the swarm before shrugging ,"Dude...I honestly don't know WHAT is normal anymore.... This might not be though. There are qaaaaaaaaayyyy to many of them here and what is that Gastly sound?," The male began to turn to and fro searching but came up with nothing.

Nan had not yet noticed the sound. But when it was pointed out to him, it became apparent. And it was also apparent that it was getting louder. Closer.

"What the..." he said. Then Nan looked to the trees. He still could not see whatever was making the noise, but there was a pattern. The leaves blew backwards, away from the pair, and then forwards, to them. Roughly in time with the sounds. Nan could not feel this wind, but seeing its affects was easy enough.

"Something's coming..." he said almost under his breath.

And that was when one of the butterflies descended. Its wings were a brilliant blue, and it was about the size of Nan's head. So it was big. It would land on Nan's head, and then he could hear without hearing.

You lie without lying. You fool not for greed or safety but for pleasure. You seek what you want but discard it just as fast. You intrigue me.

That was... something else. The butterfly had just spoken, but Nan was certain it was not through his ears which he heard it.

That is correct. I am an elder of this tribe. I have been granted the gift of communication directly with your kind. I can read surface thoughts as easily as you can hear speech, and I can push my 'voice' to you as easily as I can hear your thoughts.

The butterfly then launched off of Nan's head and started moving to Mu-jin. It would fly a bit away. If Mu-jin looked to be getting aggressive, Nan would stop him. Or at least try. Still "not a ninja" and all that.

You would be most wise to give up attempting to cause us harm. While you may achieve some, our numbers our superior and it is not long before our strongest arrive.

The butterfly would then begin to fly away. Assuming Mu-jin had done nothing, Nan would yell out "Wait! What are you!?"

Something is coming was an understatement as he looked at the major swarm of butterflies," Dude...That whole entire sentence was an understatement. THIS whole THING is an understatement. Who did you pis off in another life? Who did I piss off in this life actually? Huh...that is an interesting thought," the male cupped his chin for a moment but when the blue butterfly went from Nan to Mo-ri he blinked and readied himself. When he heard the voice in his head he blinked and looked up," Look...i'm all for voices in my head but i have enough sense to know you outnumber me. That being said where the fuck did you all come from?," his eyes slowly looking up and around before it had flew off.

... His eyes slowly went to the male as he looked from the flock to the male and back to the butterfly which he would sigh," I need a spider in my life...follow them I guess...Dude...ITS A GIANT FUCKING BUTTERFLY THAT TALKS IN YOUR HEAD," the yelling was almost comical as he waited to see what the male would actually say about this.

(Rolling that cracker yo)

We travel, was the response that the butterfly gave to both individuals after Mo-ri's question was asked. We may not even stop here, but rather pass through. It is undecided yet. This land is not the most fertile, but we may have to dwell here overnight.

The butterfly would continue to talk to them both. Yes, we do sometimes allow others to sign a contract with us, though you must gain the favor of an elder.

Now he would speak soley to Nan. You interest me, Ciel Duchamp. I will examine you for a period..

Instead of flying away, the butterfly would land upon Ciel's head. Speaking once again to them both: It would be wise to not call us soley butterflies. There are also moths among us, and in terms of raw power, they often possess more. The sound you are hearing is one of them. She should even become visible, soon.

The sound was a moth. A... single moth? That sounded... fantastical. And yet Nan could absolutely believe it.

Okay then. The male had single offhandedly been confused by the butterflies words but when he looked over to the male who had obviously been hearing the same voice as he, that was when Mo-ri had decided that he wasn't going crazy...correction crazier than he had already been. His eyes went over toward the male that had been showing an almost child like exuberance over the fact that these were probably summons...maybe he had a butterfly fetish? At either rate he looked at the male waiting for some sort of sign to pop out of his head and if he did everything in life would have made sense to him at that moment.

"So you're moth...butterfly...swarm..thing. Got it. You got any spider friends in there or do i have to go look under a rock or something? You...aren't my cup of tea. Not creepy enough and...too...colorful. Then again spiders can be pretty colorful. But you are more of his...persona.,"he looked over to Nan for a moment before shrugging and crossing his arms as best he could. Then again if the big one was on his way...why was it a moth? Unless there was a boss butterfly as well. Now that the thought of it he had probably insulted the butterfly by speaking of one of its predators...then again they could know a bit and only time would tell before he found his answer.