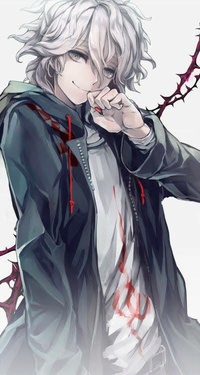 The guards suddenly poofed into smoked to reveal open air, Tamaki receded the mists.
It would seem that this was over with her whistle and he words, everyone was silent as she spoke.
"We both defend you, shinobi or priest a like."
"The least you could do is be grateful."
Tamaki did the best he could with his ploy with the guards but the real saving grace today were Sanae's words, she was gracious and kindhearted.
Considering the words Tamaki gestured towards the priests group and offered a flower sprouting from his palm, " Not all of us are of the devil friend."
The high priest with shaking hands accepted the flower and considered for a moment the weight of the actions that may take lives.
The high priest spoke quickly and with unfaltering pitch, "Brothers, we shall not spill blood today. We will forgive the trespass. We will go."
There were scattered protests from the priests but the high priest raised an open hand to quieten them and then gestured to leave.

The crowd of shinobi seemed relieved by the priests leaving, Tamaki consulted Sanae, "That was quite the speech.
Perhaps we should have opened with that instead?"
"Now that that's settled, what do you propose we do with the rest of our day?"
The day had stretched and the sun had careened through the sky and settled low in afternoon horizon, dusk would be soon and with it came an seasonal dryness followed by the cold.
Tamaki's shoulders were burdened with the day's stress and in his haste to cast the illusion had forgotten the importance of straight and emotional debate.
The awkward silence drew on and everyone was just about ready to go home, Tamaki stretched and limbered his sore limbs.
"We really should get paid for this, I wonder who to bother?"
Hungry now for dinner, his gut grumbled in protest to his lagging behind to see how everything would turn out but he managed to conquer his stomach ache long enough to hear it growl in retort.
"Would you like to grab something to eat?"
His words hung in the air as an open request between them, she could say no and conclude her day if she wanted, but secretly he hoped he may get to spend more time learning about Sanae.

Her limbs were shaking like the leaves of a young tree in a heavy autumn's wind all the while the guards suddenly disappeared and Tamaki lifted the charade he was playing. Now she was more than scared that the riot would go on, but a simple gesture did the deal and Tamaki was able to persuade them to go home all together. She was standing there like a statue watching them leave slowly and dissolve the dispute. Hoshi had to go a long way until this was resolvable but for now the tension had been settled and so there was no one around anymore. No one but Tamaki who came up to her and she was kind of relived that nothing had happened. Slowly she reached out to the headband and put it down again, letting it slide into her bag where it belonged. Then she turned to Tamaki and smiled at him a little shaky still. "That worked thanks to you", she signed in relieve and smiled at him quite fondly happy to have settled this debate without any problems, "thanks for your quick thinking", she gave him a hug. "I thought it was kind of bolt impersonating a guard, but it was a good way of getting their attention without using force." Then she heard his stomach growl and chuckled: "I would not mind grabbing some dinner with you, after this I need something to eat I feel a little shaking", she laughed a little to cover up her nerves letting go of him. Well it was all a piece of cake or a walk in the park so to say so she would grab his arm and start to return to town.

2, 000 ryo
5 AP
and a chance to advance to the next chunin qualifying mission

His arm grabbed, it was time to go and eat food.
"I think your speech may have really changed some peoples lives today Sanae, be proud of that at least."
Tamaki left the area

Approved @ Sanae, Tamaki, edit in mission rewards for your claims, and please toss the link to the mission you're doing for future reference please <3