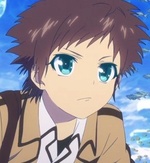 He needed to be faster, stronger, more powerful. The second part of the Chunin exam was coming up and he was up against powerful shinobi, both of which he had trained with. He knew for a fact that both of them were no pushovers and would need his full attention during the battle. His most prominent disadvantage was the fact that one of the competitors was a speed demon, far ahead of both him and the other contestant. While he would rather gaining the speed without the use of Chakra augmentation, he knew it would be near impossible to do so enough to be even close to the speed necessary within the time he had. The only possible solution he could think of was to learn a Booster Jutsu. Fortunately, there was one he had already learnt to a reasonable standard. Unfortunately, it was still not a high enough standard to be used in battle. While he could use it fine, the activation of the technique was impractical. It took him a solid 30 seconds to activate it at this point of time. The clap was simple but the deep breath always seemed to take him a longer time than expected. Maybe it was the fact that he wasn't used to expanding his lungs, maybe he was just bad at learning jutsu, who knows? All he knew was that the only way to get any better was to practice.

Deciding to get straight into it, Nano would find the nearest training ground and sit down in a meditative position. Holding his hands out infront of his body, he would clap once. He would then breathe in deeply. Altogether the breathing in would take a solid 15 seconds. While improved, this was not good enough. Not to mention the fact that he would never actually be sitting in a meditation position in a full fledged battle. Realising his stupidity, Nano would deactivate the technique before swiftly standing back to his feet. He would then clap once again. This time when he breathed in, he would do it much faster. Reaching his peak in 5 seconds, Nano would be able to see his skin take on a light red hue. While this happened each time, this was different. The red was much more noticeable than regularly, brighter than the normal red which appeared. Nano took this as a good sign, figuring it must have meant he had done it better than any other time. There was no other feasible explanation in his opinion.

With his activation time being cut down to a more reasonable figure, Nano was relieved. If he could do it in such a short amount of time, he could certainly rely on it for battle usage. Testing it out just to make sure he had gotten it right, Nano would charge at a nearby tree at full pace and halfway there would launch a wind jutsu (doesn't really matter which, this is training). The jutsu would be marginally faster and stronger, leaving more destruction in its wake. Normally he wouldn't have needed to retest the technique but Nano was sort of doubting himself. At first he didn't believe it could be functional considering how little time it took to activate however he proved himself wrong with the test. The jutsu was as good as ever and needed no more improvement as of yet. Satisfied with his training for the day, Nano contemplated his choices. He could either continue to train and tire himself out or he could go back to his home and recuperate. Seeing as exhaustion could lead to a hospital trip, Nano decided not to risk overworking himself so as to not stop himself from joining the second portion of the Chunin exams. It wasn't worth risking missing out on the thing he was training to do by training too hard in preparation for it

[Exit]
Claims:
3 stats
645 wc towards the learning of Wind Rejuvenation, finishing the jutsu. (Other wc from here and here)