Akane would suddenly be silenced after she finished her last sentence and Haruki would offer a pouch of water, saying that he was a liar and what he said before was a lie. Although, Akane did not believe Haruki was a liar and would decline the pouch of water by saying, "I'm not going to take the water until I learn this Jutsu. I made a deal with you and I'm not going back on it now!" After saying that, she would wait for Haruki to begin speaking once more and once he did she would listen to every tip she gave him hoping that this time, she was able to successfully perform the Jutsu.

Akane would then close her eyes while she began to build chakra within in her chest and would use the same amount that she had used before. She would then exhale and inhale and, would wait for her chest and throat to begin heating up. Once it she felt her chest heat up, she would feel the heat move up to her throat and would wait for it to build a little longer before she gently blew out the flames, creating a perfect fireball. Happy with what she had created she would smile and would look at Haruki while waiting for his approval. 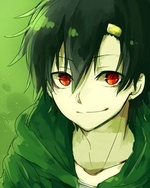 Yes! She had done it! And now, it was time to give the champion her reward. Haruki would walk up to her with an approving smile, followed up by a nod of approval before then pouncing onto her, this time attempting to cling onto her rather than hold the hug while standing up. His arms would attempt to wrap around the back of her neck before then beginning to celebrate. You did it Akane! I knew you could do it! Haruki would tell her, and if his jump onto her was successful, he would attempt to hold onto her even longer before letting go. That left one more thing left for him to do. Flicking the pouch of water from his right pocket, he would once again outstretch the drink to her, attempting to get it as close to her face as possible. You deserve this, drink up champ! The Akari would tell her. This time, he was not going to take no for an answer, not until she took the pouch from his hands. It was most likely that she would not deny the pouch of water being offered to her, but it was evident in his eyes that he would not let her go. It was time for her to celebrate, and to do that, she needed to claim her reward as a sign of victory over the giant.

When Haruki gave his nod of approval Akane would nod back and would giggle before being pounced on and praised by Haruki. When Haruki pounced onto Akane and clung to her, Akane would wrap her arms around him and would hold him up so that he didn't fall off of her. After Haruki was done praising her and released her, she would put him on the ground and would be offered a pouch of water. One that she would happily drink to quench her thirst and to clear up the slight burning sensation she had in her throat. Once Akane finished her drink she would say, "Thank you for teaching me today Haruki! It's always a pleasure to learn something from you! Although, I better get going since it's starting to get pretty late. I'll see you around!" When she finished speaking she would then begin walking towards the village to where she was staying for the night, if she wasn't stopped by Haruki before then.

See you then! Haruki would exclaim over to her as she would then exit the scene. It was time for him to go back home was well. He was not sure what he had been doing in the past, it was that much focus that he placed into that activity. The keepers of the shops probably would be happy to hear that, though maybe they did not even know of him doing that in the first place. And it was best that they did not know. It was now time for him to get out of here. So he would rollerblade away from the scene. Placing his arms out, he would then begin to exit the Training Grounds. It felt great, Akane was growing because of him, it gave him so much honor to teach her.