Akihana listened quietly as Takeo spoke, it wasn't often the young man felt he need to enlighten the world of his thoughts and opinions and over the brief course of knowing him, she had learned to cherish those times when he actually talked. No sarcasm, no base cynicism, simply saying what he felt without fear or judgement or worry of accuracy. It almost never mattered that she disagreed with him, that wasn't the point. This was not a debate, it was simply Akihana listening to that the young male had to say, of her being the person he could say those things to without being interrupted waved of as irrelevant.

"You never had a very high opinion of people did you?" the blonde asked quietly once he was finished. It wasn't criticism of his outlook on life, it wasn't even a question really. It was simply an observation the kunoichi had made a long time ago, identifying it as the key difference between herself and the man who sat opposite her stroking his pig. "Everything you said could happen, and I wish i could believe you... But I simply cannot make myself believe that Youka is what everyone else says he is. More fool me I suppose..." It was true, she had tried very hard to hate the Raikage, only to find that she could no more hate anyone than be someone other than who she was. Just s firmly as Takeo did not believe in humanity, Akihana believed in it unconditionally.

"Or there really could be peace?" she suggested, not really meeting his eyes at the words. Though Akihana believed wholeheartedly in a better tomorrow, she hadn't quite gathered the convincing power to make others believe too. Perhaps she never would, but that was alright. Everyone found their own way to answer life's greatest questions. And she would never take away the opportunity from Takeo to find his own answers, no matter what they be. It was the reason she would forgive him no matter what he did. Always.

"No one can guarantee what will happen in two years, two months, even next week. But does that mean we give up today on the grounds that the future is uncertain? Or do we try to do what we can to make it better?" Finally, the young woman raised her golden gaze to his stark white one. "I understand your concerns... And I would never blame you for leaving after finding out what you have. But that being said, I truly hope you stay for a bit. It gets lonely here where a thousand people know your name but no one really sees you..."

The young man shook his head. The logic of this woman made no sense to him. Selflessness made no sense to him. "Do what you want." He pushed himself from the chair slowly. His body rejected the idea it yelled at him not to but he did it anyway. "Have fun with the rest of your life as someone's wife." The idea itself amused him. With that the young man carefully made his way out of the room, then the building. He'd probably go collapse in a ditch somewhere later.

He left Pig behind of course. Takeo didn't care whether the animal followed him or not. It would choose it's allegiance given the situation. He wouldn't force him to stay with him if he didn't too. Though that wasn't the only thing he left behind. He left it on a table by the front door, it was some water. The young man wasn't sure it's exact use at the time. Though he had seen it used in action. Takeo figured Akihana would find more use of it than he would.

Putting it all towards med spec.

Akihana watched him leave, unable to pretend it hadn't hurt and unable to hold him back because it wasn't her place. Forever treading the line between what she wanted and what was right, the blonde lost the battle once more. What she wanted would never take priority over what was right, and the right thing at this moment was to let him go, to make his own decisions.

And if one day he found his way back to hwr, she'd be waiting.

"Well... Go on then," she nudged Pig who had came to sit beside her, his warm body pressed against her feet. She didn't know if Pig understood the concept of tears but she wouldn't cry in front of him regardless. "You have to look after him.. You know how he is, he'll probably walk into a sword on his way out."

The animal let out a sad snort, curling up against her feet. Reaching down, the medic patted his large head. "It's going to be okay. He'll be fine, he's go us looking out for him, doesn't he?" The pig agreed solemnly before making its way out the door Takeo had used not five minutes ago. On his way out however, Pig made sure to grab the last sandwich his master had left uneaten, something for the road.

It was only much later as Akihana lay curled up in her bed, her face now dry and her eyes only slightly red that the thought came to mind. Of all the terrible things Youka may have done, he had never simply left. And that was something that couldn't be said for a lot of people in her life.

She wondered if it was only a matter of happenstance, or if this unusual relationship would stand the test of time.

The vial of clear liquid Takeo had left behind mow rested on her nightstand, a reminder of what she had lost that day. 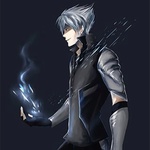