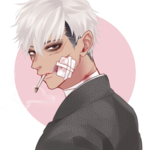 It hasn't been that long since he sent his answers in for the exam. There was really no right or wrong answer just some are better than others...unless of course he had answer completely stupid and went way off task. Ichiro impatiently tapped his fingers on the desk as he waited to receive his grade not knowing what it wouod be. He had took his time and answered each question with full honesty and as much knowledge he had on what they called for.

He knew clearly what this was. Those questions weren't just random questions but questions that evaluated his mental state and how he would handle certain things. He let out a sigh as the questions were now burned into his mind along with their answer. Ichiro slouched back into his seat and folded his arms placing his hands right under his armpit as he continued to wait. “Hmm” he checked the time, tightened his headband as he continued to wait and wait.

He just wasn't sure and it was eating him alive as each tick of the clock went by. His refused to go light a cigarette because bad habits and nor did he want to leave his spot until he got his results. Ichiro wasn't the type to think of all the what if’s but at this moment he wasn't so sure about his grade this wasn't some test he could study for afterall.

Then he got it. Well not yet, he was given a sealed envelope by the Procter which caused him to sit straight up in his seat. Ichiro’s hands slowly picked up and caressed the seal envolope as he moved his fingers gently along the edges and then down to the seal.

At this moment it was as if time had stop as he held the envolope. He closed his eyes and slowly inhaled then exhaling at the same slow pace right after. “Okay I got this far, no turning back now.” His hand quickly peeled off the seal all while in between of looking but looking away at the same time only keeping an eye on the paper as he pulled it out. Then he saw it….his grade.


He just couldn't believe it..he was shocked...without words. The boy then let out a nervous chuckle as he placed the paper down on the desk. Internally he was exploding with all type of excitement and even wanted to jump on the top of the desk and celebrate. Yet he didn't, there is still more he had to get done as the next Challenge which will mostly likely be hard. Standing up he pushed his seat in and folded the paper with his grade on it and placed it safely into his back pocket. Then the realisation hit him of what he had to do now...he couldn't drop out of it nor could he fail and with the new found responsibilities he'll be entrusted with..he just can't let everyone down heh, he wasn't even aware of how hard he was smiling as he thought about the grade.


Soon however his smile sorta kinda faded away as he faced the Procter and gave a quick bow. “Thank you….Thank You. THANK YOU!” okay calming now.

After a moment and clearing his throat he let the curiosity get the better of him. “If you don't mind can I know what question I missed?” Yes missing ten points from a perfect score was seriously bothering him.