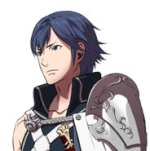 Chroms next test was one of the magics that the ninja of this land prided themselves on. While many Pendragon didn't take the time to learn them, or simply used the techniques the Pendragon had fashioned themselves, Chrom felt that making sure he had a grasp on the abilities as well as the lore of the land was important to his growth as a knight. It was also important to note that he couldn't pasts the exams in the Shinobi school with out at least two specific techniques, so he'd be forced along this path at some point anyway. The boy centered himself. He had found a quiet training area for him to focus and achieve these skills, a small pond located in the west side of Suna. Water was not an easy thing to find out here, and the sound of the lapping waves calmed the boy, however small they might be. First he focused on his inner power, his chakra as the Ninja called it. It would have to be manipulated through seals to achieve effects, and he had spent quite a while learning each one. The better magicks generally came with a long list of hand seals so it was always good to have knowledge of at least the basic kinds. For this specific jutsu, He would begin with a combo of Ram, Snake, and Tiger seals. His class had gone over these in detail, as they pertained heavily to his exam and were necessary for the Clone jutsu. Having studied intensely for this, he focused as he began to preform the jutsu.

A man stood behind Chrom, watching as the boy attempted to find his inner Ki. A Pendragons natural ability wasn't uniquely magical, but it had become a skill many Pendragon added to themselves. The most famous of these had been Adam tyhe Beast Tamer, who had been rumored to wield a portion of a legendary beast within him. While the man didn't believe that Chrom would become quite that exceptional, he saw the boy had at least a small talent for the Magick of the local Shinobi, as he was quickly getting a good grasp of hand seals, chakra pathways, and other important aspects of Molding ones inner power. The boy was just 17 and had already taken on such a burden on himself. Tasked with continuing the line of the Blue Dragon, as well as an honor bound mission to save a lost family relic, the boy had his work cut out for himself. The man smiled as the boy began to tire. Chrom had spent most of his childhood trapped behind the pages of a book, so it was a small wonder he had come as far as he had within a year, though he had much farther still to go. Placing a hand on the boys shoulder, the old master signaled training for the day would be concluded. He could see in the boys eyes that he wished to continue, but a Knights strength was important to keep up at all costs.

Chrom preformed the seals and felt his inner energy flare up. Next to him in a great cloud of white smoke, two copies of the blue haired boy appeared. While not physical clones, they were images of absolute perfection, matching every detail of the Knights features down to the letter. It was a big achievement for the boy, as he had never been very good at the magicks, but he was happy to see his intense training paying off handily.He let the clones vanish, satisfied he had learned the technique to a good point and was ready to focus on another, slightly more difficult technique. This technique was one of disguise and subterfuge, but likely wouldn't be something Chrom could rely on. Many ninja out in the world and throughout history had such refined senses that a simple Magick disguise likely wouldn't get past them. Even still, a technique that could even come in handy in the slightest, and was also yet another requirement in his exam, would be something he would add to himself. This jutsu's seals were different from the last one, which wasn't all together unusual. In fact he hadn't yet heard of two techniques sharing a pattern for hand seals, but he wouldn't be surprised if it was possible. Returning to the task at hand, the seals for this jutsu were the Dog, Boar, and Ram seals. As these had also been a point of study in the school, he actually had pretty good knowledge of how the jutsu would work and what he needed to do to cause the desired affect. Concentrating, he began focusing to preform the technique.

Chrom brought down another dummy, making 12 total on the schoolyard grounds. Most of the students watching were pretty impressed at the new boys sword skills, but Chrom didn't quite understand why. He would have been considered a novice by even the lowest Pendragon standards. His next test appeared to be a spar against one of the other higher ranking students. The boy wore the typical Suna headband, as well as a long tan duster. He seemed to be in a much more advanced stage of learning, even being new to the school. Chrom pondered if perhaps the boy had come from another village? Such questioning thoughts left his mind as he prepared for battle, his practice blade in hand and ready for a battle. The suna nin didn't appear to be wielding any sort of weapon, making Chrom slightly uneasy about such a fight. He wasn't one to fight an unarmed opponent, though most Ninja were known to have weapons hidden, or focused entirely on Magic, so the boy had to drop his unease. He let the Suna nin attempt the first blow, a fist that would sail past Chroms head. The blue haired boy would repay the attempted blow with a sharp unarmed blow to the boys sternum. To his surprise, the boy exploded into smoke, leaving a simple log remaining. Chrom barely had time to spin on his feet and block a sneak blow to the back of his head, The suna boys fist being repelled by the flat of Chroms blade. This battle was going to go a lot differently then he had initially expected...

Chrom himself exploded into a cloud of white smoke this time, as the jutsu went off as expected. He had taken on the form of another student from his class, and from the details he could see in the pond near him, he had gotten the transformation a hundred percent correct. He sighed with relief, glad his training was beginning to pay off in that regard as he dropped the transformation. Now that he had this done, he was ready for the exam for Genin, and then he could be considered for a Knights weapon and armor. While the Pendragon compound itself had more simple, Knight based challenges, Chrom had felt this was a better way to have a rounder skill set, which he felt he would need in his eventual quest. Sheathing the practice blade, he prepared to head home for the day. Tomorrow he would have to take the exam.