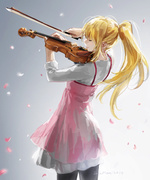 Gin decided to do some regular exercise. You know, push-ups, jumping jacks, and so on. Her primary motivation was whens he earlier had been challenged by a civilian villager to an arm wrestling match. The result: Gin nearly lost. To be fair, the villager was several times the size of Gin, with muscles reminiscent of small barrels, and Gin was not a particularly tough looking ninja. Scratch that, he didn't even look tough. So the arm wrestling match was obviously relatively tough for Gin, since she actually had to put in effort (a miniscule effort, but effort nonetheless) to push the villager's arm over and smash it through the thick oak table we were arm wrestling on. Having to use the miniscule amount of effort (as opposed to the effort required to simply move his arm) smacked (at least to hee, his head whipped back and forth several times as a result) of weakness. She was getting soft. She obviously needed to get stronger.

After slumping over on the rocks by the beach like a towel (the folds are hard to imitate), Starker Coyote changed form and collapsed on the rocks again, this time like the parking panda. He got bored of this though, and decided to do some jumps. Starker Coyote decided to do some jumps, where he would try to jump as high as possible. Starker Coyote squatted down, and jumped. Then, as he was in mid-air so fast, he started flaililng his arms, and grabbed onto a nearby tree. He shimmied down the tree, scuffling with a robin in the process (and then disengaging) and prepared to jump again. Just as he was about to jump, however, he heard a brunch, and promptly fell over. Starker Coyote got to his feet, brushing off his pants, and saw a squirrel happily collecting nuts. Starker Coyote sighed, and jumped again, right into the bottom of a small, knot covered branch. The branch shattered, as Starker Coyote had been practicing smacking his head against branches in preparation for this kind of occurrence (Starker Coyote also spent a lot of time at the hospital having bumps and bruises quickly removed, just to do it all over again and be back a few minutes later). Starker Coyote continued jumping, until eventually he barely missed smacking his head on a massive branch around ten feet wide. Starker Coyote stopped, and decided he had had enough.

Deciding on a change of pace, Gin decided to swim back to the village and work out in the gym. Starker Coyote did a cannon ball jump into the river. He had forgotten about the crab. The crab rewarded him for this by pinching him on the bottom. However, because of the crab's position under Starker Coyote, it was soon forced to let go and swim away to avoid getting squished between Starker Coyote's rear and the bottom of the rock floored river. The crab was unexpectedly pulled away downstream as a shark showed up behind Starker Coyote. Starker Coyote saw the shark coming up behind him, and jumped twenty feet into the air. Then he began pedaling his legs for dear life, only to realize that it was a waste of energy because he was still in the air. Starker Coyote stopped pedaling his legs around uselessly in the air and then landed in the water with a terrific splash (missing the opportunity to expel chakra from his feet and run on the water). The shark was not amused, as his splash splashed a lot of water in its eyes (no idea why that would matter considering its habitat). It began furiously swimming towards Starker Coyote. Starker Coyote decided it was a good time to skedaddle and dry off on the side, but unfortunately the shark would get to him before he would be able to get out of the water. Starker Coyote had no choice but to start swimming (he always needed the practice anyway, and now was a good time to start, besides, he always improved faster under pressure, though not necessarily this much pressure). Starker Coyote initially started out swimming breastroke but quickly realized the shark was going to catch him, so he hanged to the butterfly stroke. The reason he didn't go into the front crawl/freestyle is that butterfly would get more water into the shark's eyes and make the water filled with air bubbles so it would be harder to see him (he didn't know much about shark sensory capabilities). The shark slowed down, confused by the sudden burst of speed and bubbles in the water, but it soon picked up his trail again. Starker Coyote felt the tip of the shark's head on his foot, and switch tactics, starting to swim freestyle for more speed (incidentally kicking the shark and several friends who had been innocent bystanders up until that point in the nose, changing their status to "angry pursuers"). Now pursued by a swarm of sharks, Starker Coyote sped up, almost flying over the water. Downstream, there was a swimming competition to see who could get the farthest upstream. The competition was temporarily suspended as Starker Coyote came crashing through, his speed scattering competitors left and right, with the following sharks scattering the competitors further (both times competitors were pushed downstream as well). Starker Coyote managed to lose most of the sharks in the resulting chaos, except for the first one (the other sharks were more interested in entering the swimming competition and were pulling out wallets for the entrance fee). Starker Coyote continued to frantically swim as the shark got nearer, but began to hear this roaring sound. Starker Coyote lifted his head while swimming and was promptly pulled over the waterfall.

Gin tumbled head over heels as the shark poked its head over, annoyed at its inability to follow him. Starker Coyote continued to tumble head over heels until he landed in more water with a terrific SPLASH!!!!! The villagers fishing in the pond were soaked, as was everything else in a 50 foot radius around the pond. Starker Coyote swam backstroke, while gasping for air, over to the side, only learning he had arrived when he banged his head on a rock. Starker Coyote staggered out of the pond, and collapsed in exhaustion on the side. He was tired of this type of training, so he went home and had a shower.

Starker Coyote walked into the ninja gym, about to start flexing muscles. He looked around the room, and thought better of it, as many (he didn't want to say pretty much all) of the ninjas present (even the girls) were lifting more than he could currently hope of lifting, and many looked mean. Starker Coyote decided not to be flashy at all for once and started lifting weights. By golly, these were HEAVY! He could barely lift the minimum weights of some of the machines. Starker Coyote (somewhat) valiantly struggled away at moving the massive weights but started to get exhausted. After a short break, and a drink of water, Starker Coyote was ready to roll, again.

Gin decided to take a break from lifting weights, and went to look at the exercise class schedule. He looked through the list, realized his mistake, read the list, and then headed off to the next one that was starting. The room was very crowded. The instructor instructed everyone to start warming up so Starker Coyote stuff his clothing with napkins. People started looking at him like he was an idiot, as they started stretching and jogging in place. Starker Coyote realized what was supposed to have happened and dashed to the bathroom. He hastily removed all the paper, and ran back to the exercise class. The exercise was in the middle of doing a set of 500 jumping jacks for an extra warm up, so Starker Coyote started, late of course, and tried to catch up. Starker Coyote had only caught up a little when the rest of the class finished and they began the tougher exercises. Starker Coyote really hated mountain climbers but that was the next exercise so he did all one thousand and twenty seven and a half of them. He was interrupted part way through his five hundredth mountain climber (counting on one leg only) when the instructor told him to lower his buttocks, and that he was supposed to count on one leg, but only every other time (so in case you are still wondering, Starker Coyote had only done half of what he had thought he had done). Gin sighed, and finished the mountain climbers.