I Must Become Faster 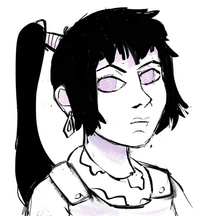 I Must Become Faster

Yumi was sitting on top of her parent's dome house taking in the morning sunlight.  And while the temperature was already a blistering twenty-six degrees Celsius, a gentle breeze could be felt which kept the young genin feeling cool.  Yumi was not in the most chipper of moods.  Recent events had proven that she was weak.  She was much weaker than both of her teammate's, Ryu and Togi.

On top of her parent's dome house was the only place the young kunoichi felt that she could truly feel alone.  And being alone was exactly what she wanting at the moment - away from judging eyes, away from other's thoughts.  But as she looked down, she noticed some of her clansmen stepping out into the street.  Some of them looked up at the young genin and waved.

Even here, I'm can never truly be alone, Yumi thought as she waved back and donned on a mask of smiles.

They were fake smiles indeed.  Yumi was feeling the lowest she'd felt in a long time.  And on the inside she could not bare the feelings any longer as instincts decided to kick in.  They told her to run.  And so she did.  Yumi picked herself off the roof and slid down using the Surface Climbing Technique, making sure to use a minimal amount of chakra so she wouldn't stick to the plastered surface.  As Yumi reached the bottom, she made a b-line towards the complex gate.  From there she ran straight into Suna's crowded streets.

There was no particular rhyme or reason to the direction of her sprinting.  She just wanted to feel free - free from watchful eyes.  And while Sunagakure's streets were always crowded with villagers, they did not seem to the young genin.  They were much too busy dealing with their own lives to worry about a little girl.  As Yumi ducked and weaved out of the mass of people, the young genin realized she had made her way to the Ninja Headquarters.  For some reason fate had brought here there.

Yumi walked inside and saw the ninja clerk busily signing a huge stack of papers.  He did not even notice her walk in, but that was a blessing in disguise.  Had he noticed, the clerk would probably give Yumi a mission.  Yumi tip toed into the back room where all the jutsu scrolls were kept.  Yumi flipped through many scrolls before finding one that caught her attention.  Many were too high of rank for her to try and learn.  But there was one that caught her eye.  It was laying by itself as if destiny had brought her to it.  The wooden label which dangled on a piece of string that was attached to the scroll read Body Flicker.

What's this? Yumi wondered as she unclasped the scroll and stretched it out.

Body Flicker was a technique which was used by ninja to increase their movement.  If preformed correctly, it would vitalize the user's body with chakra which would heighten his or her speed of movement.  It seemed like a relatively easy technique to master as it only involved using one hand seal - Ram.  After looking over the scroll, Yumi re-wrapped it and placed it back on the shelf.  Then she tip-toed back to the main room.  The ninja clerk was still busy signing papers.  An audible grumble could be heard at least once.

Yumi dashed out of the main entrance and darted towards the training grounds.  While she'd never used it before, Yumi remembered the grounds had a running track.  And now she understood why.  It would make for an ideal location for test out the jutsu.

Yumi set her giant scroll which contained her puppet down in the soft sand next to the track and began to stretch out her body.  If she was going to be running she would need her legs to be as limber as possible.  She then stepped onto the track.  Unlike the rest of the training grounds, the track was not covered in sand.  Instead it was made of a much more solid material.  It might have been made of solid stone, but it was painted a dull red.  Regardless the surface of the track did not matter.  It was meant for running on and that's exactly what the young genin wanted to do.

Yumi started out at a slow jog (speed 10) to get her blood flowing.  As she went around the track she increased her speed (speed 20).  After a few more trips around the track she increased her speed to her maximum speed (speed 60).  After the a complete trip around the track, her heart was racing.  It was then when Yumi decided to try the jutsu for the first time.  Yumi held out her harms and placed her hands together to form the ram seal.  Yumi molded her chakra and released it.  She felt her chakra throughout her body, but when she looked down, she realized she was no longer on the ground.  Instead, she was several meters in the air!  Wisps of wind trailed behind her like streamers flapping in a breeze.

Oh crap!  How did I get up here? Yumi thought as her eyes widened, The ground is awfully hard to be like this!

Yumi quickly tucked in her legs held out her arms, as she fell back to the jogging track, Yumi extending her hands and pushed off the ground to roll forwards doing a couple of somersaults before boosting herself standing back up.  Her forward momentum only slowed down a little as she continued to run.  It took a couple of steps before she fully regained her composure.

Yikes, that could have turned out much worse than it did.  But how do I translate that burst of speed into horizontal momentum instead of vertical?

And then it hit her, as she molded her chakra she remember pushing off with her feet.  He body was already going upwards in that direction.  Her head was up as well.  Yumi preformed the hand seal again and pushed off the ground.  But this time Yumi kept her head down.  A sudden gust wind blasted the young genin in the face as her body reached a faster speed than before.  It was no gust, it was simply the young kunoichi's sudden burst of speed.  It was hard to control as she zoomed around the track.  Yumi noticed that her arc was wide, but cutting closer to the center was just not possible.  And just as quickly as her speed increased it stopped again and settled back to her max speed.

What a wild ride!

Her mood had definitely since she first awoke.  It was as fickle as the wind itself.  As Yumi ran around the track she grabbed her scroll and slung it over her shoulders and ran straight for the climbing wall.  Yumi jumped up into the air and molded her chakra to her feet and started to climb its smooth surface.  After placing her hands in the ram seal, Yumi zoomed to the top of the wall in no time.  As she reached the top, she stuck out her hand and molded chakra to it to use it like a pivot.  On her way back down she placed her hands together again.  Again she signed the ram seal, and in a blink of an eye she reached the bottom.

She was off to the races now, the training grounds could no longer keep the high spirited ninja any longer.  And soon Suna's sandy streets were filled with a brown-haired streak.

Re: I Must Become Faster