What exactly is Dojutsu? (MasonUchiha)

"Hmm?" Aya said taking a moment for what he said to register. Aya almost panicked for a second. They she realized everything was going black. She could still see but with no color whatsoever. Just black things with white outlines. She cocked her head to the side. This was strange but also felt somewhat natural. "I can't register your face..." she said getting closer to him and then walking around him in a circle staring at him from odd angles. "There is something around you but I can't see it." She said strangely. "I can feel it now but I can't even see the detail on you at all. You look like a blob" she wasn't trying to b mean at all, just trying to understand what was going on.

Then all to suddenly, the black in her eyes started to shrink, the diameter growing smaller and smaller, the iris following, until they were normal sized again. She could see normally again. "Maybe that was supposed to be my dojutsu.." she said, her eyes still focusing. The rapid growth and shrinking of her pupil made everything blurry a moment.

She shrugged it off. "Um... I guess we can get some ramen" she said feeling rather closed off then she had been before.

(I'm just going to go to the ramen shop and start there.) 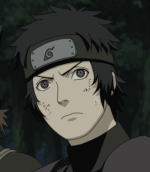 As Ayame was telling Mason about what it was like, all Mason could think of is "My ass hurts." and "What did I get my self into?" Another thought came to him after the initial two "Why my ass though?" As Ayame's eyes fade to normal he is a bit relieved responding with "You have one creepy looking dojutsu." in a joking tone.

"Alright come on lets go." Mason would say trying to put a smile on his face. "Murphy, go home. There should be some Ramen still in your dish." he said in a kind, but stern tone. He listened to him and ran home.