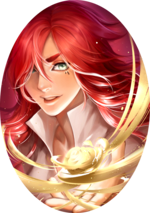 The Uzumaki barged through the front doors of the Kazekage building, making her towards Koroshi’s office. Their were urgent matters at hand that needed to be addressed, and Kira needed to head out as soon as possible to stop the ninja who may leak information on Sunagakure. “MOVE!” She shouted to the two guards in front of the office as he opened the double doors where she would hope to find the Kazekage seated at his desk. “Kazekage-Sama” She said through heavy breathes. She had sprinted here from the library where she had recently spent most of her time learning a new technique for what she was about to ask Koroshi for. “I’m just going to cut to the chase! I believe a missing ninja came to our village to seek intel on us and has left. More importantly, he has info on me that I rather he does not find.” The Uzumaki finished quietly, but loud enough for the lord to hear her. “Please… I have trained day in and day out. I have grown as a ninja so I ask you to please let me pursue him and stop him from relaying the info to whomever he’s working with. I know this is hasty, but time is a delicacy right now! I have a mark seal on the boy from the time I interacted with him… before I knew he was a criminal” She said the last word with utter disgust. “Please Kazekage, Let me travel to the borders and summon him so I can apprehend the boy and bring him back to Sunagakure for questioning!” She finished. She was hoping it would just be enough. Time was something that was not on their side.

The guards seeing the girl franticly running toward the Kazekage's office, would step forward attempting to grab a hold of her arms to prevent her from running in, and to try and calm her down. However as this scene is playing out Koroshi senses her chakra network inside the building, as well as feeling her frantic foot steps running toward his door with his Doton sensory. Feeling all of this he would rush to his door opening it in time so that the guards don't touch her, as they each stand straight up "My lord" they both say as they look toward Koroshi leaving the girl in his hands. Seeing Kira and how panicked she looks Koroshi gestures for the guards to go else where so they can talk as he leads her inside. Should she continue with telling him everything that she has stated in her previous post as they are walking in Koroshi would sigh out, he cannot just leave the village to get him, but he also cannot put Suna in danger by having information out there, he begins to think of what to do, and who he could send, however not only is Kira willing to go, but he can feel that she is much stronger then when they first met, that and she has a way to catch him with her sealing arts "Very well, you may leave to bring him back to Suna, however if you need anything, or if things get to dangerous come right back, do you under stand?" Koroshi would say giving her permission to leave.

Kira was shocked to see the door open before her hands were able to grasp the handles. The guard who tried to hold her back let go as Koroshi was present. The Uzumaki quickly explained the situation and found herself short on breath. To her surprise, the Kazekage had given her the thumbs up to pursuit the enemy who had left Suna no too long ago. The Uzumaki nodded with almost tears in her eyes. “Thank you Lord-Kazekage. I will apprehend the target and bring him back.” Without another word, the girl rushed off and headed straight for the gates. She already had everything she needed. She was going to find Sal, she had to.

Koroshi would nod to the girl wish her good luck as he sits down in his office chair leaning back in it his eyes closed, by this time Kira had already dashed off leaving Koroshi here, and what she would believe as alone. However as he sighs out a voice is heard from the shadows of Koroshi's office, having been concealing himself all along Migite speaks "That's a change, letting other people help protect the village, aren't you worried she will fail? or possible die?" He says, his dragon mask making his voice sound deeper than normal. Koroshi at this point would open his eyes looking at his Anbu and one of his closest friends"Nope not one bit, because you are going to make sure she is alright" Koroshi says with a grin, which causes Migite to shake his head "Some how I knew you were going to say that" and with that he vanishes in a body flicker, making sure to follow behind her while keeping his chakra hidden as well as his foot steps. He shall continue his roll as the watchful protect of Suna, even if you aren't there.