Art or is it The Art of Jutsu? 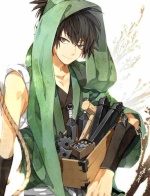 Art or is it The Art of Jutsu?

Substitution Jutsu 500 words))
: The area he now stood was a place set aside by himself for training his Jutsu. His eyes looked around as he began to form the Hand signs with his hands slowly at first. After completing this he attempted to activate his Chakra after his last hand sign. "Substitution Jutsu!" There was a poof of smoke and he stood exactly where he was before and had obviously failed. He sighed softly, then returned once again to focusing on his Jutsu. His hand began to form the Hand signs much more rapidly than before. Another cloud of smoke as he used a block of wood that was set next to himself in place of his own body. Leaping backwards landing swiftly upon the ground sliding along the ground from his speed.
Throwing out his hand in a swift motion, his fingers grasped a kunai with a exploding tag tied to the end of the handle. His fingers releasing the kunai into the air with a large towering tree in mind. The kunai soared through the air towards the large tree that towered over himself. The kunai hit the tree and the tag exploded a huge part of the trees lower trunk. This caused the tree to topple towards the ground in his direction which would kill him if he got struck by the tree. As the tree thundered towards him, he started to swiftly create the hand signs for the Substitution jutsu. The tree fell and a thunderous sound filled the air.

The boom from the tree was more intense than he would have thought could come from a tree. The dust began to rise filling the air like a heavy mist would have,His lungs hurt from the dust and sand that caused his throat to swell slightly. His lips cracked and bleeding he licked them slowly, blood that tasted like grit and copper filled his senses. Finally after what seemed like ages the dust settled and he was able to seen effectively. The tree had fallen exactly where he had been standing before he used the jutsu. A log rested underneath the tree where his body would have been only a moment ago. He had successfully used the jutsu under very high tension, He smiled at himself before dusting himself off.

He looked around as to see if anyone had seen this event and then he started off to his home. His home consisted of a bed and a desk with thousands of paintings from historical to Abstract. He opened his door as he shuffled into the room and struggled across the room in a slow sturdy like way. His Aunt opened her door to seen that Botai was laying upon the floor unmoving his eyes closed. She panicked and started to scream at what appeared to be Botai dead on the ground. Upon closer expectation she realized he was only asleep and her eyes took on a cold look along with a loving one. " BOTAI!" Could be heard from many different directions and for a great ways and It wouldn't be a surprise if the Kazekage didnt hear it himself from his office. Lest another adventure another day and another time.
500

(You should actually make a post for someone to respond to. <3)

Done can i get a approve.

Clone Technique: Waking up he did as he had always done in the past. He started to paint what he had dreamed of the night before. He was practicing a technique called Clone Jutsu, but for some reason he just could not complete the Ninjutsu with messing it up. His clones were all messed up and he kept crying afterwards in annoyance. Shouting out in anger hateful things about himself and smashing his fists into the ground. Suddenly she was there, a female Shinboi that had saved his life on his way to the wind county. Her hair was like fire and she wore no Headband to state her village so he assumed she was a wanderer of sorts. Maybe a criminal but he would never see her as that, he was so very deeply in love with her. Alas he was just a boy and she was a woman of great skill, and it was her that he wanted to impress. To be powerful enough for her to acknowledge him, and to protect her. Finishing his painting of the Female Ninja he got dressed and headed out of the door. Once he had arrived at the training grounds he began to practice. "Ram, Snake,Tiger." He formed the hand signs as he spoke out loud to himself. "Clone Technique." With a poof there stood three Yaichi's . One was normal the second was the same as the him, but the third was droopy and looked ill. "Dammit." A poof of smoke clouded the area as Botai stood once again alone. "Ram, Snake,Tiger." He formed the hand signs as he spoke out loud to himself once again. "Clone Technique!" This time all three clones where perfect, so he was very pleased to know he had no problems unlike the dream. But his dream did have something to do with it. Did it not help he have to passion to learn this Jutsu?. "To protect her and show her I am not just a kid." He began to run swiftly with his clones as he focused on keeping the ninjutsu active. He ran with swift long strides, his right hand swiftly grasping the hilt of a kunai Knife and looped his forefinger through the hole at the hilt. Rotating his hand the kunai began to spin with around his finger rapidly, he looked at the clones as they did the exact thing he was doing. "Perfect" He whispered to himself as his lips curved upwards in glee, his eyes closing as he did this. Then with eyes closed his hand that spin the kunai lashed outwards his fingers releasing the kunai as it spun into the air. He clones released there kunai's but obviously they didn't really exist. The kunai spin striking the Target log dead in the center with a loud THUD. Satisfied with his efforts he looked at the sky and realized that he had been out training the whole day. "Wow I need to get some food." So off he walked into the village to grab some grub.(504)

Transformation Technique:
Today was going to be a great day he thought to himself as he strolled along the streets of the village. He entered the training grounds in a upbeat and rather determined mood and it showed. His form was well rested and relaxed which showed from his posture. He stood off in his little training area and stared at the sky in wonder. Today was going to train on a Ninjutsu Technique called  the Transformation Technique, which he heard some other much younger child talking about. He doubt that it was as hard as they said it was, he had gone through many hardships in his life that made this look down right pathetic. He swiftly began to form the signs with his hands,  He thought of the kazeKage within his mind. He looked around and realized that he felt different, when he looked at his reflection in a puddle of water he had created "Dog, Boar, Ram... Transformation Technique Activate!"by throwing a pale of water on a stone basin that he appeared just like the Kazekage but he was completely naked. Within that second he lost concentration and the Jutsu failed. "Dammit I was doing so good too. How did I fail why was I naked?" Sighing he sat down upon the ground and started to seek deeply into thought. He tended to do this often enough when he came across a problem that he could not just solve life most things in his life. This was something logic would not solve so easily. After some time thinking very hard about the result of his Failure at this Ninjutsu Techinque. He realized that he could not remember what the Kazekage even wore the last he time he saw he talking to a genin within town some days past. He had to go investigate this matter if in fact it was because of that than he could just think of any clothing and create that image. "Dog, Boar, Ram... Transformation Technique Activate?" Fog from the Ninjutsu activated and he coughed harshly seemingly like a fool before the smog cleared. Looking at himself in the waters reflection he noticed he looked like the Kazekage but in swim trucks and and a "Beach Bum" shirt upon his form. His face turned red, then deep crimson before he exploded in laugher from the sight. He turned and began to walk out of the training area laughing to himself. Then he stopped and looked down upon his hands in wonder, even though he was laughing so hard he still retained his Ninjutsu, he still liked like the Kazekage. After he dismissed the Jutsu he continued to walk down the village road  towards the ramen shop because damn he was hungry.He thought about this day and he smiled a great huge smile, though he probably looked like an idiot he didn't care. He was on his way to becoming a great ninja one day.(511)

Also you receive stats from training

You'd technically get 2 for each of your trainings so far.