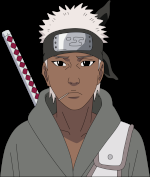 The kunai flies straight at Jason and, the thrower being too fast for him, successfully lands a hit. The Kunai stabs through Jason's wrist and, out of instinct, he holds his arm with his left hand almost instantly and brings it up to his chest. He inhales deeply through his teeth and falls to his knees.

The next thing he knows, Jason finds himself face to face with the attacker.

"Forget Ashur! Focus all attention onto this guy!" Jason yells in his head. "I don't want to fight... I'll die if it's to the death... this guy is too strong."

"Okay, now!" Jason says. "There's no need to fight right now." A lie. Jason knows that this guy has the reason to kill him then and there. Kumogakure doesn't tolerate insubordination... or you go to the pikes. And that's the evil of Kumo...

When the boy, seemingly the same age as Jason and only about 1.5 inches taller than him, lets Jason go, he is relieved. The fear...

"Right... sorry about that." Jason apologizes.

"Well, nothing will help me now." Jason thinks. "If he's going to report to Mortarion, I might be dead by tomorrow. Might be... if the Raikage thinks I'm something to worry about.Quickly, Jason builds katon chakra in his chest ready to try the Phoenix Flower again in the case that this shinobi decided to engage in a battle.

(Ugh dude your hand is cut off sooo)

Rikaro being five meters away would only stare at the dismembered hand that lay on the ground as he cut straight clean through the artery of the boy's hand." You should get that looked at soon because if you do not you will quickly die of blood loss " said Rikaro as he stared at the unmoving hand on the ground." That will show you that our village doesn't take well with traitors " said Rikaro as he heightened his senses and turned around running away from the ninjas at his heightened speed to go and warn the Raikage.

(Jason, you should go to the hospital XD)

Ashur watches the hand fall and his mood set changes. He now feels relaxed, because although it was awful, it wasn't very bad at all. He then got a wonderful idea for Jason as Brandon relaxed with him. He was going to try to store his chakra like earlier, but now he needed to do something better. He was quick, he needed to be. He jumped up, and let his wings take over his movement. He then used his clan ability and moved at 90 speed towards Jason. He was there before Jason could even lift a finger, and then landed. Brandon rolled his eyes and walked towards him slowly, knowing he didn't have anything to do with this.
"Let me help you, It was mostly my fault for asking you anyway."
He made sure nobody was in hearing range, and if they were to be he wouldn't say this.
"Look..."
He put his hand through Jason's hair on top of the ninja's head, and his pointer finger would put a mark seal onto his scalp. This would be hidden by his hair, and would be unnoticeable by him.
"You can't go around saying things like that or kiss ups will find you and snuggle with the Raikage over it. Cutting off your hand must hurt like hell, but at least he didn't kill you. Another thing, don't ever say that kind of thing about the Raikage again. I don't care if it was true, just don't say it around me or anyone else."
He put his hand out of Jason's hair, and then let out a smile.
"Let me lend you a hand now."
He lifted up the hand off the ground, and Brandon knew what Ashur was going to do. The frog took the hand up, and would hold it by Jason's wrist.
"Hopefully I can do this."
He opened up his ninja hand book, and reread the page on the jutsu he was about to do. He then nodded, and gave a smile for what he was about to do. Ashur weaved a Boar, Rat, then Snake hand sign then held out his glowing hands over the hand and the wrist unless stopped. The jutsu failed to help out Jason.
"Damn it."
He looked back at Brandon.
"Thank you Brandon, for holding the hand in place, but it seems he will just have to get a pirate hook or something."
He would the look at Jason, and know he had put the mark seal in a perfect place. Jason wouldn't have any idea what he had done, but now he can keep tabs on this boy for later. He then got a great idea.
"Hey, we should do a mission together! I feel like you might be able to learn a thing or two from me, and seeing just how powerful I am might be interesting."
He gave another smile, hoping he was doing the right thing. He was helping someone with a big mouth, but he had a big mouth himself so they are going to get along well aren't they? He then took bandages from his summoning glove, and stopped the bleeding on Jason's wrist. Ashur then decided the hand was going to be a problem as well, and simply tried to hand it to Jason.
"Here, I wasn't able to heal it so lets go to the hospital. They can heal it up in a jiffy."
Ashur would smile, and collect his things. He would then try to get Jason to walk with him to the hospital to get the boy healed. Ashur now knew that ninja was one he was going to remember, he knew that someday he would see that ninja again. Ashur felt he really should have just killed the boy, and hid the body but he wasn't like Clyde. He would know that this kiss up was going to tell the Raikage, but he knew the Raikage probably didn't give a care in the world to hear about something as tiny as this. Ashur simply knew that he was bitter towards this boy for getting rid of Jason's hand, but at least Jason wasn't going to bleed to death. The bandages kept Jason going, and all that seemed to be the problem was getting to a hospital to get this healed up.

Yes, Jason was furious but at no particular person. Anyone else would have been incredibly angry at their attacker for severing their hand. They would have sought revenge and tried to take his right hand too. Revenge isn't Jason's way. In fact, Jason loathed revenge with a passion. Imagine... if Jason were to retaliate and remove his attackers hand, who is the greater man? Rather, who is worse of a man? "Getting even" makes nothing better. "Getting even" only insights greater anger and strife between two people. He hated the word itself.

"Hospital" is all that Jason hears through his rapid thoughts. Ashur's voice.

"Yes. Yes, a hospital!" Jason's eyes open wide. When he looks down, his hand is already bandaged.

Jason jumps to the roof of his house and onto a nearby building top. His destination is the hospital.

"The plans have been set back a bit..." He thinks.

(Not sure if you're following me there or not but I think that this thread has served its purpose. This is my exit unless you think otherwise.)