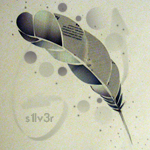 It was a cloudy day in Kumogakure. The sun was lightly obscured by thick rain-bearing clouds threatening to unleash themselves upon the earth. Lightning, too, was a possibility.  Kira was able to glean this by looking up at them and comparing to his past observations of cloud behavior. Today, he thought, could be a great day to train his chakra.

Shiroi had a plateau all to itself. There were several scenic areas scattered throughout that were ideal for meditation. Kira had already scouted them all out, but found that there was one that caught his interest in particular. It looked over the wilderness as opposed to the city, and the sun was to the side instead of facing directly at him. To Kira, this was perfect.

He took this chance to bend down and pick up a rock from just off the road. No doubt this would serve his purposes quite well as he was wholly interested in learning to manipulate his chakra in new ways, such as learning to infuse it into other objects. He became familiar with his weight as he rotated it around in his hand, looking it over. This would be his training device for the next few hours.

Kira turned and glanced at the large flat boulder that he had intended to meditate upon while infusing his chakra into the stone in his hand. He walked up to it and sat upon it, crossing his legs and holding the stone with both hands as he let it fall to his lap. In this position, he closed his eyes and began to focus on his chakra, willing it to come to life and pour into his hands, where he would try and place it into the stone.

His chakra slowly pooled into his hands. As it grew and grew, he began to to try and associate it with the rock in his hand, and then to drive it into the stone. He focused on keeping his concentration uninterrupted, detaching himself from the rest of the world. As he focused on doing this, the loud boom of thunder echoed across the peaks, and then the shower of rain quickly followed suit.

Rain. His thoughts were in disarray, his focus shattered. He even lost some of the chakra in his hands before he renewed his endeavors. Clear my thoughts. Even as the rain began to beat upon the stone around him and his feathers and clothes became drenched beyond compare, he started to ignore it and instead focused on his chakra.

This was important to him, to master this art. He knew that he had to be able to do this with little effort, but it was bothersome to him that it wouldn't just hand itself over - practice was a necessity, but a barrier that he wished was not required. He returned to clearing his thoughts, trying to focus on the task at hand - forcing his chakra into the rock.

He continued to think about the rock as he held it in both hands, having his chakra surrounding it as he tried to make it become infused with his very being, his chakra start to seep ever so slowly into the rock. Kira could feel his chakra entering the stone now. Progress! But congratulating himself broke his focus, and the chakra immediately retreated into his palms. This provoked a mental groan from the ninja, but he began to redouble his efforts, clearing his mind onc again of distractions.

The rumbling roar of thunder sounded once again, and the rain began to beat harder, bolstered by rough winds. Kira focused on ignoring it all, he had a task to accomplish and he wasn't about to let the elements get in his way.  He poured his heart and soul into accomplishing this task with his chakra. He wasn't about to be defeated by a little rain and thunder.

No, he knew that he would rise above this, and master this ability. He had to, it was a necessity. He was curious after all, he wanted to know what new horizon he could soar towards after he accomplished this. Concentrate, concentrate... the chakra was starting to flow more freely, finally entering the stone to some degree. I need to make my chakra a part of the stone now, so it's infused with it. I need to make the stone a part of me...

Thunder, rain... all that was missing was lightning, and lightning did happen. Kira saw through his eyelids as the background lit up, but he wasn't about to let it phase him. He had already come so far after all. He was so close, but the weather was beginning to get dangerous. He was beginning to worry that it wouldn't let him finish his training.

His concentration was interrupted by yet another crack of lightning, followed by the loud boom of thunder. The wind picked up, and the rain began to grow sharp against his skin. He was already positively drenched, and he knew he didn't want to get sick in this weather. Kira decided to call it a day and opened his eyes, stood up, and made his way back home to warm up and dry off.