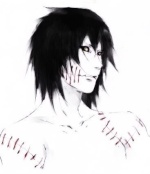 It had been years since Coeus has used any sort of jutsu, not counting his use of Earth Grudge Fear to slaughter the trader caravan days before. One his path to becoming the strongest shinobi, Coeus knew that he would need to not only start using jutsu again, but he would have to learn new ones. Instead of diving into the deep end, Coeus figured that he would start with a simple, yet useful jutsu, deciding on Earth Release: Rock Section Cane.

The jutsu was as simple one, using one's Doton chakra, a rock is shaped into a staff. Though not interested in bōjutsu, or using many weapon techniques, the ability to have a weapon practically on demand would be handy. The spot that Coeus picked to practice the jutsu was far from the road, in a wooded area filled with rocks. It was clear that the rocks used to be larger, but after years the trees slowly broke them apart. With all the small rocks around, there would not be a lack of martial to use for the jutsu.

Sitting cross legged on the ground, Coeus picked up a rock, about the size of his fist. Holding it in both hands out in front of him, almost similar to a pray position, Coeus started focusing his doton chakra on the rock. For several minutes, nothing seemed to happen, the rock was not responding to his chakra. Figuring it was just due to insignificant amount of chakra, Coeus increased the amount he was pouring into the rock, causing it to shatter, shards cutting his hands and face.

Though they were just minor scraps, tiny threads from within his body quickly stitched them up. Yelling in anger, Coeus unleashed a torrent of threads, which easily severed through a small tree's trunk, causing it to crash to the ground. Whipping the threads around, Coeus took out several more smaller trees, before impaling the threads into a tree that was far too large to take down. Having released a large portion of his anger, the threads quickly retreated into his body, stitching the skin back up.

Coeus knew that his skills would be rusty, but did not figure he would have such an issue with chakra control. Sitting back in his position, the destruction from his rampage lay on the clearing's floor around him. Picking up another chunk of rock, Coeus resumed his position from earlier. Taking a deep breath and closing his eyes, he focused his chakra, simply getting a balance of the chakra within him. Once he attained a level he was confident with, he started focusing on utilizing simply doton chakra, feeling the chakra within him change, taking on an earth feel to it.

Once he had fully converted his stored up chakra to doton chakra, he started filling the rock, visualizing the rock glowing with a brownish aura. Using his connection the the doton chakra in the rock, Coeus started to mold the roundish rock into a rod. Taking several minutes, Coeus finally got it into the shape he wanted. Without even opening his eyes Coeus could feel that the rock had taken on the shape of the staff, so he was not surprised once he did.

Throwing the staff to the side, Coeus picked up another rock. Over the course of the next couple hours, he turned numerous rocks into staffs, each time it came easier then before. Eventually he both ran out of rocks, as well as speeding up the process to the point where it took mere seconds to transmute a rock to a staff. Though it might not be the most powerful jutsu, it would come in hand in the future, as well as giving him a weapon where he did not have to reveal his true nature.

Picking up one of the staffs, Coeus started walking back towards the road. Though this was put a small feat, he knew that it was a step in the right direction, the step towards the path of the most powerful Shinobi.

Re: Coeus Jutsu Training: Return of the Ninja

If you want to keep the staff with its stats though, you should make it into an item in Creation Center. <3