Darkness Meets with a Rouge(Pvt)

Darkness Meets with a Rouge(Pvt)

Fenik was walking around the boarders, as he was blind, he rarely knew where he was going exactly, but he did not seem to care, he was actually rather thrilled over his recent accomplishment over creating his own element, something that was his, Fenik wold have a smile on his face as he walked, feeling his way around with a random stick he had picked up, using it to help avoid obsticals that might be in his path, he sighed softly as he felt the wind blow through his hair, he would nod and think things to himself, trying to imagine the lay of the land to himself 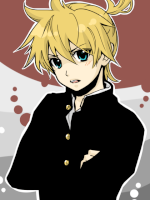 After that recent encounter with the girl named Kasumi, Oren had decided not to enter Kumogakure after all. He was not sure why, but he just turned and walked away from it. Maybe he did not feel ready for it, maybe he was afraid. Whatever the reason, he was now on his way back, leaving the Lightning Country. Walking with his traveling backpack the boy would be deep in thought, he was analyzing his own feelings about the situation, about the girl, who he had to admit was significantly younger than him. This process would be interrupted when he saw another person on the road. Oren would tense up a bit, slowing his pace, trying to stay silent. He was close to the village, so the person could easily be a ninja. The Tengai boy decided to watch and see what happens, if he will be noticed or not.

Fen could not see anything Due to being blind, he did not hear anything, he was to lost in his own mind, plus the sound of his stick hitting the ground, making sure his way was clear, eventually as he used the stick off the path a little, he would find what he was looking for, a little clearing, he would sit down in this clearing, cross his right leg over his left, and he would drape his arms across his knees, he would then begin to concentrate on his chakra, pulling the yin and yang chakras again, mixing them to make his Darkness element once more, he was making sure he kept a steady use of this, so he would not forget or lose it completely, while all his concentration is on his task, he would be rather oblivious to the outside world

Following the man at some distance, Oren would notice the stick that the man was using, touching the road he was walking with it. From it and from the way the man behaved Oren would guess that the guy was blind. He would feel somewhat sorry for him, this world was harsh to everyone, especially those that would be a burden to others, those that were somehow disabled. They would require great will to survive, or would die off. However, those feelings would get immediately hidden somewhere deep, and suppressed strongly when the guy sat down in a clearing and Oren noticed the surprisingly big and heavy money pouch. The conflict of pity and greed lasted only a second. Holy crap, with that much he could live for the rest of his life without a worry. Would he care if some blind guy would be left broke?... hardly.

Trying to stay as silent as possible he would sneak up and snatch the purse from the rather oblivious man that was clearly not entirely here. If he was successful, Oren would decline just as silently, before bolting from there as fast and far away as possible.

Fen would be to busy concentrating on creating and holding this new element he founded, he was very fond of his Darkness, maybe because it was what he was used to, the darkness was just so comforting, it filled the void he felt awhile back, Fen would stand up long after the other person he never even knew was there, and would use his stick to find his way back home, going back in the direction he came from slowly, it would be a while before he noticed his money was missing, let alone he would never know when or who took it from him. Fen would arrive at his house and would get ready for bed, doing as many push ups as he could, and then as many sit ups as he could, using a door frame he would do as many pull ups as he could, and then he would shower the sweat away, then he would feel his way to bed