The Shinobi stops dead center within the training grounds, the sun shines upon him as he feels the warmth of its rays. Today was different, something he could feel within him was telling him something. Today was gonna be filled with new surprises. He had not felt this feeling since the day he became a team leader. His first set of team members, the thought of it all. From all his experience, there was one thing that he had learned from it all. Let the past stay in the past. To keep moving forward, that was his new way. He takes note of his surroundings once more, the scenery today was actually quite nice today. The vivid green grassy plains that took up quite the area, the sparkling lake that resided over yonder 30 meters ahead, and the large healthy oak trees the surrounded the truing grounds. Samaruo looked back slightly to view the entrance, nobody else was here, just himself. What Samaruo wouldn't give to get some company, company that would be willing to learn that is. Samaruo loved to teach what he knew, it was soon developing into more of a habit than hobby, if the two weren't the same.

He continues the walk towards the lake, slowly, a slight rare breeze brushed against him, with scattered leaves to follow. The grey Flak jacket that he wore was secured tightly on him, the shirt that he wore beneath it was a black short sleeved shirt. The Uchiha crest that was located on the back was covered by the jacket. His head band was wore against his fore head, his long black hair was tied in a thick pony tail, reaching the mid section of his back. His pants were also black, it tightly cuffed his ankles. The single pouch that carried his supplies were strapped to the back left of his waist. As for foot wear, he wore his traditional black shinobi sandals. This was his regular everyday attire, as anyone who knew Samaruo well enough knew this.

Arriving at the lake, he once again remembers his first spar with his old team; the memories. 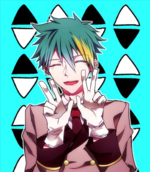 [ENTER]
Tatsuya was woke up with much excitement. He was going to do some sparing with his friend Kasai. It had been a wile sense he had seen his friend. He recalled the first time they met at training grounds 11. Tatsuya had been training alone with kunai knifes when Kasai appeared. H had shown him a bit of techniques when throwing kunai and how at first he was hesitant of trusting the man with the odd mask but he was glad he did. They decided that he would meet each other at the grounds to begin sparing. Tatsuya walked down the different streets and paths until he got to grounds were he retched to the skys stretching  his arms out and then taking a deep breath in.

(enter)
Kasai watched the two figures, seeming unaware of each other, one by the lake, the other in the training field. He wondered who to approach first.
Friend in the field. Jounin by the lake.
Watching them both, he decided to stay put, between them, and see which would notice him first.

In train of thought, the crunching of the grass signaled the sign of a new comer. He turns around fully to eye the new individual. The blond haired person was about as tall as Samaruo. He thinks this while watching him stretch, a ninja perhaps? Why else would he be in the training grounds? So, as a good gesture, he decides to greet the him. While samaruo walks over towards the blond haired individual, ready to introduce himself, he spots another figure off to the distance, near the entrance. His eye wonder off a bit for a second, but return towards the blond haired person. It looks like everyone wanted to come train today it seems, if they were shinobi that is.

Reaching towards the blond haired person, he introduced himself in a friendly manner. "It seems I wasn't the only one who decided to come to the training grounds today. Hi, Im Samaruo Uchiha", he states, extending his hand towards the unknown villager, he stands within correct distance. He wondered when the other one would join them, or if that other one was just a spectator. His sight upon the other distant villager was unobscured.

Tatsuya sees the man approaching. Right away he is able to tell that he is at a much higher level then he was. He notices his long black hair and wonders for a second what he would look like with hair that much longer then his. Quickly snapping out of it he squares his shoulders with the approaching man. Tatsuya wonders if this man is here to train and if so what amazing jutsu he may have.

Tatsuya sticks out his hand in responce to his and shakes it. "Yeah so it would seem, Nice to meet you Samaruo, im Tatsuya Hidaka." He notices his last name right away as Uchiha as he has never met an Uchiha before now curious to learn about his sharinghan.

Kasai watched through the holes in his mask as the new figure met Tatsuya. He tilted his head to the other side.
Go or stay, go or stay.
He slowly took a step forward, and began to approach them, keeping a distance. The new figure, Samaruo as he called himself, seemed friendly enough.
What could he want. Where to go, what to do. Perhaps he is alone. Perhaps he does not wish to be.
Kasai stopped walking abruptly as he felt that he had come close enough. He did not wish to distract them, as he was very distracting in his strange mask and clothes, yet, if the new Jounin was to discuss taking the Genin under his wing, Kasai did not wish to be left behind.

The two shake each other's hand, "Nice to meet you Tatsuya. I'm actually here to ready myself for a mission, I make a habit of coming here and preparing myself before any mission I take. It's sort of a ritual", he says with a smile after returning his hand to his side. Though it appears that Samaruo was looking towards Tatsuya, he notices the other on e was getting closer and closer. The masked stranger was getting closer and closer. It seems that the masked one was quite tall too, both of them were. But, what made the masked man stand out even further, besides the mask, was the clothes. They were bright, did he normally dress like this? Such attire would make anyone an easy target in the field.

"So why are you here, Tatsuya, If I may ask?..." His watchful eyes continue to survey the area where are masked figure stood. "...You ok?", Samaruo asking towards the masked man.

After the hand shake Tatsuya returns his hand to his hip and answers the question. "Yeah im doing ok, my buddy Kasai and I met here a few weeks back so we decided to come back to do some training." Looking over to see Kasai approaching. "WE both want to become much better shinobi." Then glancing down at his shadow. "Anyways what type of mission are you going on?" He asks curiously.

Kasai tilts his head to the other side as the Jounin asks the question.
He knew why he had asked it. Many always did. The carnival clothes, the strange tribal mask; most would think he was partially crazy. Which, he no doubt was, but he understood.
"Fine for now, yes, I am well. And of yourself? You are Jounin, are you not? Very skilled, very smart. Much experience," He paused, wondering if his strange way of talking would confuse the man.
"I am Kasai, as Tatsuya has mentioned. We search a team, such as were formed before, mentored by an experienced Shinobi. To watch, to learn. It is a pleasure to meet you."
He stood for a moment, and then remembered it was common curtsy to shake hands, and extended his to do so. Flicking his eyes up and down from inside his mask, he looked over the man. He did seem to have much experience, and survived countless missions. This would be a better mentor than Kasai had ever hoped to find.

So the two knew each other, the tension was lowered now that the masked man wasn't a complete random stranger. He glances back towards Tatsuya, hearing him say that they were both shinobi, interesting. Samaruo wondered what rank they were, he couldn't give a good guess as of now. "Its nothing too complicated, just a search and retrieve type mission. I might run into a few opponents, so it's best that I stay conditioned." He looks at both shinobi, they were in search of a team. This was the third batch of shinobi that he came across that were without a team, it was pretty bad, considering the need for upper class sensei were high, and hardly none to satisfy the demand. These two, genin, Samaruo suspected, could do well under his teaching. Johnny would have to deal with the errors of his ways, whatever he is doing, the loss of his spot on Samaruo's team will be of his own doing, not Samaruo's.

"Tatsuya and Kasai? Well, if your looking for a team, I would be happy to help you two advance your skills in the shinobi arts. If you want, I can place you both on my team, since you two are genin. Right?" Samaruo would only continue further if he heard the right response. Only Genin can be placed on teams.