Ryuu is in the training grounds.

Ryuu begins to smirk as Dagger got closer to his position. "What is this kid thinking? Huh, maybe this will be fun." Ryuu thought to himself. Ryuu then began sprinting toward Dagger, thinking that a little game of chicken would be quite an entertaining, same for the spar as a whole." Ryuu then grabbed the fist that Dagger had stretched out trying to punch Ryuu in the stomach, pulled Dagger's body closer to him and sent an elbow, heading straight for Dagger's head. 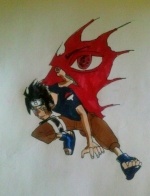 Dagger notes that Ryuu decides to run towards him. He decides to take the original plan. He thinks to himself, "This should be entertaining at the very least and fun at the very best."
He keeps himself going, making himself use his own momentum to run faster at his full speed. He then lets himself run into Ryuu and feels as Ryuu catches his fist. He then thinks in the instance between the catch and the reaction of Ryuu, "Well, I guess the idea to do a all out attack on the first blow wouldn't have work in the first place."
He the watches as Ryuu throws an elbow at the face. He then thinks, "Oh come on not the face, dude, this is how I get the girls."
He then catches the eldow with his right hand and yanks back his left hand. He then pushes away from Ryuu and jumps back five meters.
He then says, "Okay, man, we got to make a rule against hitting the face. Girls don't dig guys with bruises, now do they? And I would have to say round one is a draw there. Mildly entertaining of course, at least for me."
He then kneels in the ground and bows his head, and focuses himself. He thinks, "I must win. No matter the cost. I must find a way for me to emerge victorious. I don't understand why I want to win so badly either, I just know that I must win."
He then raises his head, his eyes narrowing on Ryuu, and he says, "Your move, Ryuu."
He then thinks, "I must win."

When Dagger had set the ground rule, Ryuu couldn't help himself but to laugh. "Are you serious?!" Ryuu exclaimed in disbelief, "You are in a battle and the one thing that you think of is your face? Alright, if it's that big of a deal to you then I will oblige your no face rule." Ryuu said with a huge smirk. When Ryuu saw Dagger drop his head down, looking as if he was thinking, Ryuu did the same thing. Ryuu knelt down to one knee and put his hands together to make a circle and began thinking of how he was going to go about the rest of this battle. When Ryuu heard Dagger say that it was Ryuu's move. Ryuu raised his head, stood up to both feet, grabbed a kunai out of his weapons pouch and got into a battle stance. "Well then, I guess play time is over eh? Alright, I hope you're ready." Ryuu then began sprinting toward Dagger, just before he reached his position, he ran right around him and threw the kunai right between Daggers feet, as if to scare him. Ryuu then jumped to the bark of his tree and ran up to his favorite branch and waited began to think of the rest of his strategy. "Alright well this guy can't be that much different then Takato Hyuuga, so maybe I can do something similar. Actually you know what? No, I think I am going to really test this guys skills. See what this guy can actually do, but first, let's see what he does in reaction to this opening of my strategy." Ryuu thought to himself as he awaited Dagger's response.