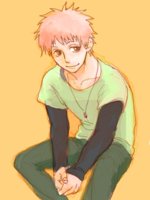 Haruto concentrated, trying to divide the chakra in his hands. He had decided on trying out puppetry, but having only one thread per finger was inefficient. He was concentrating to see if he could get the lines to at least 3 or 4. It was taking a lot of his concentration, and felt like he was trying to divide molecules in his fingers. It simply was a tough challenge, but he had heard it had been done before. The legendary hundred puppet technique required you to have more threads, so he would simply have to stick out this training until he succeeded. He poured more chakra into the lines, strengthening, but at the same time, dividing. He tried to keep the chakra even between lines without having to press them together. He hadn't even quite made a successful puppet, but Haruto figured learning how to control a bunch of lines at once would make that simpler. The more powerful and complicated the puppet, the more strings he would need. The one he was currently making wasn't overly complicated, but it would take quite a few strings if he had only one handed access. But if his fingers had multiple strings, he would be just dandy.

Zen was walking around in the village thinking on what he was going to accomplish next in life. He already was strong enough to compete well stand for his own in a battle, but he wanted more power, but what was the next step? he had a few ideas, but it only involved crazy stuff, and Zen wanted to back away from all of that. it's not really violence that's the answer for everything, it was  the words from Zen's Father.  Today, the purple dread head was going to the training grounds for some workouts and training. not to mention, he is currently trying to learn his flooding technique, it could come in handy for big fights and other crazy stuff.
Dressed in his usually attire, but much more perfect today, instead of not wearing a neck tie, Zen did just that, he found this hot purple neck tie at a  store he went to, got it for the half ryo price. He was wearing his favorite purple suit today, with some all black Stacy Adams, he wasn't dressing to workout or anything, bit he thought it could relief his mind a little bit. His katana that was strapped firmly to his right hip, and his ninja pouch which held a single kunai. His exploding tags and smoke bombs and his two boxes of  Makibishi which was all held in his backpack. His hair style was in a pony tail as usual..
Just a few minutes ahead before he arrived to his destination point to continue this beautiful sunny day in sunagakure. Zen was indeed in a good mood to start up something. Turning forward, the man would be at the top of the hill smirking, lurking out the training grounds area, he really didn't see nothing, though he probably needed to dig in deeper, the kill shots was just to annoying.  Sliding down the hill on his left side, he would land on both feet and sigh. Noticing rocks a lot of sand obviously, few trees bushes the was all nice sizes and stand strong. The area was peaceful and quiet.
Walking over towards the deeper end, he noticed a boy, that pink head again! haruto! Turning to his forehead, Zen saw his head band, he was finally a Genin!  The smirk grew bigger, it appears Zen lessons worked out for him. Walking over to the kid, Zen noticed he was working on his chakra skills or what not.
" Yo, Haruto! Whatcha doing here buddy?" Zen asked with a smirk on his face, " What's the damn story today homie?" Zen stated, he would then approach the boy, the area was cleared out though, no trees would block the sun or nothing, it was a clear shot for the boy shadow, and due to zen being a bit rusty at this, he wanted to give the boy harder work. " You know what, since your Genin now, imma try something harder on you!" Zen stated, he would then turn towards the boy shadow and attempt for a manipulation. if this went well, Zen would have full control over the boy shadow, it was time to make a little fun.

"Haruto would look up at the other man and nod in acknowledgment of his presence. "I'm trying to divide my chakra strings for multiple puppet control. Its pretty hard. If you have any Tips on such a thing, i'd be glad to hear them."
Even while he talked he concentarted the chakra in his hands. He could feel himself becoming ever closer. he just needed some sort of snap realization. Doing all this, he would not notice Zens jutsu.

Zen would sigh, once the manipulation was successful, he turned forward towards the words of Haruto. it appears he was trying to gain control over his threads, Zen was pretty good at this indeed. " Well kiddo, let's see what we got here!" Zen would then release the boy shadow and walk over to him, " Alright,  now what you want to do is get the feel of thing's more, let's try to work with that more.." Zen would step over to the left of the boy, and watch the threads go to work. " wait that reminds me, I got a test puppet we can work on here!" Zen reached in his backpack pulling out an old puppet, it was clearly worth it, this would help the boy learn his threads more and other stuff. But he wanted to try the multiple puppets thingy, Zen never heard of such, therefore with him being curious, he would ask. " Yo homie, what's up with the multiple puppets? how many we talking here?" Zen asked with a smirk on his face, he wasn't a puppet fan after what took place in a spar way back in Amegakure.  Standing there, he would wait for the kid reply, just before tossing the dummy to the ground, he would wait for Haruto to shoot some threads in it, and try to at least gain some type of control or something.

While waiting, he would attempt to think of some other ideas, but Zen wasn't that good at guessing, but at least the boy was working on his chakra strings, perhaps Haruto needed more puppets?  this is so the threads will be much more successful and understandable.  " Okay, once we're done here kiddo, come over to my place, we need to try and build up a puppet for ya, this is so your technique or skill or whatever will come out right. But don't get me wrong, I think this multiple puppet thing is going to be awesome indeed. Actually I can't wait to see how this turn out!" He stated, as he placed his right hand on the boy left shoulder.  Hopefully Haruto would try his best and do this successful, though Zen didn't have any problems with the boy completing something, in fact he was pretty smart and well trained. Zen loved working with him!

"Number of puppets? I was thinking around 100  eventually. I don't see anyone quite getting past that. Which is why I need 10 strings per finger."
He would concentrate, and a couple of strings would attach to the training puppet. He would try to branch the strings off of one another, but it didn't seem to work that well. "I'll see ya later Zen, I gotta go for now. I'll come by your place later."

With that he would leave for now, wondering what he should do.

Zen heard the boy say 100, though he was in a bit of a rush. " What the hell?!!?!!?" Zen noticed him walking away, it seemed awkward, but Zen never questioned Haruto, but his actions have been awful lately. " Oh well, guess it's the chicks chasing up behind him again!" Zen would sigh, taking out a cigar, he would place it on his lips, just before he leaped up and ran away, it didn't make any since to stay in a stupid peaceful area, which Zen thought he was going to grab some piece though, it went down the hill just like that. Heading to the nearby seven eleven, Zen would purchase some food and drinks and head home.