Around the time, he left the food store, he would have Austin with him, with the cigarette that was still hanging from his lips, and the rain that'll start falling hitting the sand, for each drop of rain, the sand would pop up, it was indeed beautiful, but zen hated the rain!  Smoking his cigarette, he would have Austin following him towards the training grounds. it was around the time they beat the hell outta each other. And zen wasn't going to run, he was going to indeed teach the boy a good lesson. But this fight was going to be much longer than the other ones. This fight, Zen wanted the boy you understand who was the sensei, and what he could do! while smiling, he would have both hands in his pockets, and thoughts would be going threw his mind. Still smoking his cigarette, he would turn back to see if Austin was okay, while still walking, he would sigh. " Alright man, be ready for worse butt whoopin ever!" zen stated, he would still be walking over to the training grounds, but with nothing else to do, zen would add a little fun towards this walk. " Know what, let's race!  but be careful, it's raining! you don't want to trip down in kill yourself!" Zen would then leap upon a roof and turn downwards towards the boy direction. " If you follow me, you'll be alright!" taking off running, zen would be heading towards the training grounds. 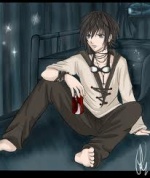 Austin runs after zen but knowing suna cleverly he takes a shortcut thats a straight shot to the training grounds. Austin going through it running full speed knowing not to trip and die. With Austin now at the training grounds all he can do is wait for zen.

Noticing boy speeding up ahead, Zen would laugh, a leap to building to building, he would slide down the board, and turn forward, charging forward, Zen would head off for the training grounds. Once he made it, he noticed Austin standing there.  Sneaking up behind him, Zen would pull out his kunai, stepping over to the boy, Zen would attempt to place his hand on his mouth and the kunai would be by his throat. " In a situation like this, what should you do?" Zen asked with a smirk on his face, while waiting for a reply. He would whisper in the boy ear. " Make sure you answer right, if you don't I will punch you square in the face! this is very important to learn." Zen stated with a smile on his face, he enjoyed training other ninjas around the village, but this was indeed a bigger job. Still waiting for that reply. Zen would be thinking about teaching the boy the basics. Perhaps some of the known tricks and some of his own. But he didn't want to start up anything just yet, until at least, the boy knew a few things. Perhaps after zen teach him the basics, they could maybe fight. But until then, Zen wanted to see where his mind was, how he acted when put on situations like this. He wanted to know everything.

" After we're done with this, imma work you out, make sure you understand what to do. so therefore, I want you to do two hundred push ups, and a few laps around the training grounds. After that, imam teach you the basics and also some other cool techniques and tricks that I know. Once we're done with that, imam fight you! No hold back no nothing. But however, there will be no killing. Just that one of will be put in the hospital."

Sigma was laying on a rock when he heard such a noise in the distance, two genin were here in the fields to train. He sat up and yelled over to the others "So you two about to train? Mind if I join?" He was sitting there as though that rock were a chair, his blue jeans under the blue jacket he was wearing.

If the boys told him no he would return to napping on his rock but if he was allowed to join he would stand in a fighting stance waiting for his "comrades" to begin.

Austin seeing that someone new has joined them thinking its a enemy he quickly goes behind him with a kunai in his hand. Hey Sensei Want me to take care of this punk he might try to attack us. But seeing he only wanted to join them raises Austins awareness making sure the person doesn't try anything.

Zen noticed the boy would ignore his attacks. He already had him in a choke hold with a kunai to his neck. But it appears something else caught his attention. Releasing the boy from the choke hold and removing the kunai, Zen would sigh.


Hey Sensei Want me to take care of this punk he might try to attack us.

The man could only laugh, all the boy did was ask if he could join their training spar, perhaps Austin was just ahead of himself. " Well, I'm going to have to say no to that Austin, it's just another ninja that's looking for some training!" Zen stated, he would then turn forward to the boy direction. " Hey kid come down, and Yes, you may join us, besides, we was just getting started anyways!" Zen was always happy for more competition, this might have been just that! Turning to Austin, Zen would walk over to him. " Now, be cool when the boy comes, I can't have you both trying to kill each other!" Zen would only tell the boy one time, next time it would be a punch to the face! While waiting for the next opponent. Zen would begin to speak. " Okay, obviously we're here to train! So my student Austin, start with those two hundred push ups, and the few laps around the training grounds. As for you new comer. State your name and rank, and I'll assign you to something, perhaps a fight. maybe a duel between you and Austin here! We'll see!"

Sigma was astonished by the two, his words seemed to put them both at ease. He then listened as they conversed with one another, he was then caught off guard by the question. "Genin, Sigma" He then stays seated awaiting further responses.

Austin nods at his sensei and starts with the pushups. While watching the other boy austin decided he would do 2 handed pushups for 100 and the other hundred he would do 1 handed. As austin sees that the new comer was a genin austin smirked at him hoping they would fight. After hitting the first 100 pushups austin goes on his right hand witch was his strongest doing the pushups with ease while watching the new kid.

The boy seemed to be a Genin? Smiling, Zen would point over to Austin, he was currently doing his daily push ups, but Zen would have to interrupt that, " Hey Austin come here!" The sensei stated, he would then hold his right hand out and point over to the new comer. " Okay, since I know you both is Genin, so therefore, I want this to be a even matchup, throw all of your weapons on the ground so we can begin! Once you're done with that, you two can start fighting! I want you both to get the feel of each other, and at the end of the fight, we will all train up at least, but before we do, Imma give ya'll a five minute break. Then we can start with our training and our daily exercises! Now chop chop, let's do this!"Once the man was done talking, he would point to the new comer. "You is now one of my students. Welcome to the pack Sigma!" The man stated, he would then go walk over to the side, and take a seat on the ground. Reaching over to his backpack, he would flip out a bottle of rum, sipping from it, he would sigh. " Now we don't got all day, so let's get straight to it. Also, did will not be a fight till death battle, this will indeed be a simple spar, just so I can see what I'm working with, but I can already tell Austin going to be my put in work guy, and you, the new comer you're going to be my information guy, whatever I say it goes. but, I'm pretty sure Austin will fill you in with the rules of this team. But if we stick together, we would be strong." That was zen last words of speaking, he would sip from the rum bottle and hold it up to the air, just before watching the battle! Though, zen hated the place, he wanted to go home and relax, it was time for him to take a nap  anyways, though the two was left here with his attention. " hey Austin finish up here, and come meet up with me, imma be at home!" Zen stated, with a smirk on his face, he would walk away, though the man would only sneak off to the other side just for some simple training before he went off to his home. he wanted to get the juice up and going. While standing on the other side so Austin and Sigma couldn't see him. He would begin his solo training for today.  he really didn't know what he was working on with people, but it was something indeed hard for him. Perhaps a few technique training? zen really didn't know, but he thought if he would work on his taijutsu training. His fighting skills was indeed a bit off. Punching two times in the air, he would follow that up with a simple kick. Though, it would have been better with his training dummy, but he pretty much had everything under control. After that first blow was threw, he would pull out a simple kunai, flipping it in his hand, zen would begin to fight, his taijutsu skills was going to indeed improve after this, though it was going to take time indeed for him to get better, it wasn't anything that was going to take a life time. Once he was done with that, he would begin to work on his everyday push ups, set ups, all of his usually training sessions. Laying on the ground, he would place both palms on the ground, doing two hundred push ups at full speed, he wouldn't stop, it was indeed fun for him to train just before he left off for him. Once zen was done with the two push ups, he would then hit the ground and preform his one hundred set ups. Rolling over on his back, he would begin his set ups. After indeed a few moments of that, Zen would stand and begin with his taijutsu skills. Though it didn't really need that much work on like his chakra. Once placing his body to the ground, he would begin to rush chakra down to his hands. his chakra training would only take a few moments. Once he was done with that, he would then pick up his kunai from the ground, walking away, zen would head over to his home. for some rest, and a long day up ahead tomorrow.