Kankri looked at the both of them, he was annoyed at the boys reaction, he had been told the berries he was now munching on where poisoned or well they assume anyways, the truth was there was no poison in the berries they where hand picked by Kankri for a pie he was gonna make, not wanting that fatty hamburger meat all the time he felt he needed a bit of protein in his life.After the man chowed down Kankri broke down the girls words, it seemed as though she was apologizing about him trying t kill her, Kankri thought for a minute even though she did instigate him he didn't have a damn right to go trying to cut her to pieces, Kankri looked at both of them with fire in his eyes, not the fire of anger but the fire of curiosity, Kankri looked at both of them, up and down their bodies not dwindling to long he didn't want to seem like a perv or anything Kankri came down with one thing he could call both of these two... IDIOTS, the girl for apologizing to him over something that wasn't her damn fault, the guy because even though the berries could have been poisoned he continued to eat them, Kankri sighed then looked himself over.

Kankri though to himself giving himself a quick idea of what he was... he was a Idiot also, for attacking a fellow ninja, for not introducing himself to the man giving him reason to fight back, Kankris eyes widened he found out what he was his only real friend was Sora who he shares a abusive rivalry with he sighed, then smiled and looked at the two, "I'm a idiot" Kankri said with a loud tone, then began to explain.

"Gir- Lad- Madam, i am sorry for not getting along with you, you kept twisting my feelings and i felt hopeless and finally after you faked cried i snapped into a rage, i wont lie i had the intention to cause major harm to you and your body, something i am very shamed of now" Kankri said pulling his ring off and holding it in his hand with a smile "Here, put a bit of chakra in this" Kankri said tossing the ring to her "You can borrow this" Kankri said with a smile looking to the man.He sighed "My nae is Kankri not demon, and there was no poison in those berries don't worry, i am a true Kumo ninja had i wished to slay you, i would have gone the manliest way possible with a match of fistycuffs" Kankri said with a smile trying to make the man laugh, it was clear that the man could kick Kankris ass in a few seconds but a few jokes never hurt anyone.

65 sharpness via a sukura corps Stone} 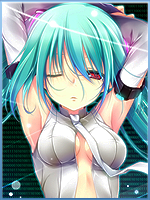 Megami watched on as the starving boy, whom was clearly delirious, dug into the bag of berries, devouring them hungrily. She sighed, feeling a little disappointed that she hadn't brought much food with her on the trip. After all, the boy was probably still starving considering all he had to eat before him were berries. Though, she did suppose that there were people out there who could fill up on berries rather freely. She sighed and looked over at Kankri, awaiting his response to what she had said to him.

The words broke Megami's concentration completely and she almost stumbled in surprise, taken by surprise by the sudden recognition of such a thing. 'He's... An idiot? What?' she thought, unsure of how to respond to that. Luckily, the boy went on and had not simply stopped there. "Gir- Lad- Madam, i am sorry for not getting along with you, you kept twisting my feelings and i felt hopeless and finally after you faked cried i snapped into a rage, i wont lie i had the intention to cause major harm to you and your body, something i am very shamed of now" she pondered the words for a moment, realizing that back at that time the boy really had intended to do her severe bodily harm. It had not merely been her imagination or her assumption of the situation, after all.

What really surprised her was when he tossed her a ring, which she held in her, slowly channeling chakra into it as it suddenly expanded into a full-sized katana. "Wow!" she shouted, swinging the katana skillfully through the air before channeling chakra into it once more, reverting it to a ring. "Thanks, kid! I love it!" she said, putting the ring on her right index finger. "So I know your name, Kankri, but..." she turned her head to glance at the boy ingesting the 'poisonous' (not so poisonous) berries. "What is thy name?" she asked rather politely, genuinely curious as to the identity of this person who sat crouched before her. 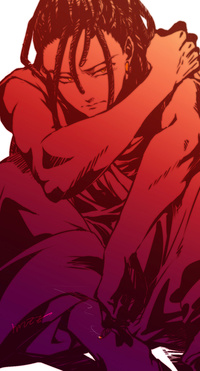 Koaru rose to his feet now that he was feeling a bit better. He could certainly eat more, but the berries were enough to spare him the hallucinations. He heard Kankri and Megami exchange words, and found himself relieved to discover that the berries Koaru had so hastily consumed were not actually poisonous. Having fully introduced himself to Koaru, Kankri offered Megami a token of apology. Koaru smiled at the sense of hospitality the ninja of Kumogakure seemed to share. As he dusted off the dirt on his clothes, Koaru would reply to the lady, who politely asked his name, with a devilish glint in his eye. He rushed to Megami's side as he anwered, attempting to grab and kiss her hand.

"So glad you asked, milady. *smooch* I am Koaru Garinado, of the Leaf. I live to love.....women. And I love to live.......for the sake of women. It is a pleasure to meet you *smooch* and your acquaintance Kankri kun. Ah, speaking of which, sorry about the punch"

Koaru would give Kankri a casual salute to acknowledge his presence before laughing nervously, slightly embarrassed about his behavior earlier. Koaru backed up a few steps, and stretched while he took in the beautiful scenery of the mountain line, Kumogakure just in sight. He then turned back to the duo of Kumo ninja and noticed Megami's new weapon.

"So what brings you two so far from your village? Could it be...that you are off training?" Koaru asked with challenge in his voice.