Re: Brothers of two Lineage [P]

At last, Johnny knew what he needed to do. Samaruo could see it in his eyes, such determination and will. It was times like this that Samaruo loved being a teacher, he smirked slightly as Johnny walked back to where he was, Samaruo would be behind Johnny while he attempted the jutsu once more. Samaruo placed his hands in his pockets, his long hair flowed with the recent wind current while waiting in anticipation.

The Senju readied himself it seems, yelling off to Samaruo with high confidence, that was what he wanted to hear from Johnny. He was determined, Samaruo nodded towards him, whether Johnny's view was directed towards him or not. Watching Johnny perform the correct handsigns, Samaruo's eyes making sure of that, he inhaled a large amount of air. Samaruo's attention was focused on Johnny with extreme detail. After that intake of air, success would finally come to Johnny, the giant ball of fire expelled out of his mouth, heading off in a direction away from the two. "Excellent", Samaruo said, after Johnny's outburst of success. Watching Johnny running towards him, he said a few more words. "Now do you see, what a bit of confidence would do?" Samaruo left a pause, taking notice that the sun was no longer up any more, it was a cloudy night. "Well my little brother, it seems that we have run out of sun light, and I don't want to keep you up all night." Samaruo had wished for them to continue, but Johnny needed his rest. "But don't worry, tomorrow, we will be doing a mission together, so be prepared Johnny." 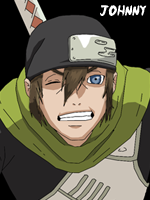 Re: Brothers of two Lineage [P]

Johnny was happy to hear of his brother approval of his hard work "Thank you big brother it really means a lot to me that you believe in me so much" Johnny then shouted "So whats the next thing im going to learn Samaruo" Johnny faced look disappointed as Samaruo told Johnny they were down for the day "You know i'm a ninja now and you should start treating me like one i'm not a little kid you know!" But then Johnny heard the best news he is going on a mission tomorrow "Really!? You really mean it!" I swear if your joking i won't forgive you brother!" Johnny ran off in excitement "Mind as well stop for a bowl of Ramen maybe even put it on his tab Zahahah! What brother don't know won't hurt him."