Small flames lingered on the path before Ayumi, leading towards the academy. Kenzo's body was completely drenched with water from the sprinkler system. Those wet strands of black hair stuck to Kenzo's face, head, and neck as he stood there. Kenzo said nothing. He did nothing for moments, except breath and stare at Ayumi in awe. His flames were nothing compared to the blaze that she released from her lips. Somehow... she had channeled fear into his brave heart! That reality was almost as painful to Kenzo as standing in the presence of a GIRL who was better than he was at Katon. Such a thing was unthinkable! Those black eyes became moisted, and water flooded his eyes lids, nearly overflowing from the sheer amount of salt water. Kenzo did not want to be seen crying, especially not in public. Fueled by the anger and dissapointed ment in himself that clouded his mind, Kenzo toke a kneel, and bowed his head to the female. That was the moment that his arm was launched forward towards the burning grass of Konoha. His other hand pulled up the sleeve of the arm that was extended, and Kenzo held the bare flesh that was his fore arm over an open flame that lingered on the ground, punishing himself for his own cowardice! As the act of self-hatred and mutilation was commited, a single tear fell from Kenzo's eye towards the ground below. He was silent... only for a moment though, for a boy with skin as soft as his could not resist the pain that overcame his body, surging throughout his arm before sending the impulse to scream to his brain! And oh how he screamed... Kenzo's head cocked backwards as the sun finally hid behind the trees, stretching long shadows along the ground. Now a expression of sheer terror was present upon Kenzo's face as he cried out towards the heavens, cursing himself for being so weak. Suddenly, streams of salt water were running down Kenzo's face from his eyes. He held his arm ther, and continued to yell as his flesh was cooked. 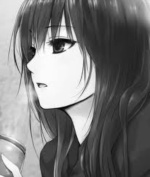 The boy was drenched with water as he stood there, staring at her. But, he didn't say anything at her at all. Nothing at all. Not even a word or sound, was made by him. That was one thing she noticed about him - he hasn't spoken a word not made a sound from the very beginning. He only spoke once, and that was when he told her to play wit him and that was it. Ayumi clenched her right fist, her left hand still glowing green. She watched as he dropped to ground on his knees followed by his upper body and head. She was taken back by this as she stared wondering what he was up to. He then pulled back on of his sleeves, revealing his bare skin, and then held his hand over a flame that was still on the ground. And then it came - the loud scream from him.

By then, she was stunned and slightly tremble as she sped towards him. Once she was close with the boy, she would slip her right hand right under his stomach and pulled him up, scooping him and held him, hoping that he wasn't heavy so that she could run while carrying him like that. She would run away as fast she could away from the fire and lay him gently on the ground. She would then pin him to ground with her her legs, putting a little bit of her weight on him so that he could escape, and took him burned arm as she brought her left hand, which was still glowing green, over his burn. Slowly, she would channel her chakra from her hands into the affected areas, thus speeding up the healing process. His skin was as soft as a baby skin, which made her worried that he might have gotten an internal burn or whatever from the fire.

She wound then continue to heal his burn, looking at the little boy, wondering why he would put his arm over the flame hence burning his own flesh. She sighed, hoping that he wasn't badly injured by the fire.

Kenso's small body told not a tale; He was just as light as he appeared to be. Suddenly, his vision was nothing, but a blur. The wind resistance kept his arms from moving anywhere; not that Kenzo was trying to move. When his eyes finally regained focus, and his senses could register what was happening, Kenzo was lieing on the ground with his arms pinned extended away from his body. Those appendages where pinned to the ground, keeping Kenzo from moving even an inch; not that he was trying. The flesh upon Kenzo's arm had been burned black, with trails of blood running through the inflicted area. As Ayumi's hand was held over the small boy's arm, the scorched flesh began to regain a natural shape and color. His flesh moved in such a way that was both natarul, and unnatural, yet the end result was inevitable. His flesh grew back, reattaching each layer of skin to the layer below, and not even a scar remained. Such handy work from a medical nin. She was a medical ninja too? Gah! Kenzo whimpered slightly, attempting to stop the tears from flowing, but they continued despite his wishes. He didn't want her to see... He didn't want anyone to see, but he felt so weak. Struggling against her grip was hopeless... Pointless. He turned his head away from her, avoiding her curious gaze.

The little boy turned his head away as Ayumi tried to look at his face. She sighed as she saw tears on his face and concentrated on healing his burn. Softly, she tried to console the boy, finding ways in her head to somehow try to make him stop crying, "Hey, stop crying okay? Everything will be fine. I'm going to heal your burn and you wouldn't even get a scar or a mark or whatever. Look, if you want to talk about something, you can come and talk to me. If you have any problem... then come and talk to me if you want. Even if I'm your problem. I don't care..." she stopped talking, realizing that she has been babbling nonsense and was maybe making him feel worse. She decided to shut her mouth and just be quiet for a while.

After she was sure that his burn has healed completely, she moved her hand away and shifted her weight off of him, moving her legs away so that they are now forming a 'M' (or a 'W' from a different perspective). She looked at him, wondering if she should help him up or not. In her head, she was hoping that he wouldn't run away from her.

He turned his head the slightest bit to peek at Ayumi's face as he wiped his tears. Wasn't he the emotional one today? The soft swollen eyes of the baby-faced male shifted away from Ayumi as Kenzo sat up, and bent his knees, bringing them up to his chest as he wrapped his arms around them. He wasn't going to run again... He couldn't. He simply looked at her again, and those soft eyes observed her figure. She wasn't scary at all, so why did he run? Oh yea... the fire.


Kenzo said to the female, turning away from her as he did. He lowered his head, tucking it into his arms so that only his eyes could be seen peeking over the edge of his forearm. As he stared off into the distance at the moon, his hair shining in the moonlight. He peeked at her from the corner of his eye.


Why does she keep looking at me?


Kenzo wondered. At such a young age, even he understood that burning himself was not a normal thing to do, but who was normal nowadays? He probably hadn't even put it together yet.

Ayumi sighed as he sat up, pulled his knees up to his chest and looked at her for a second, saying a thank you, and turned away. She looked away from him, training her eyes at the moon, big and beautiful as ever that night. She stood up, ready to leave as it was late, but walked towards the boy and plopped down to the ground instead. She would softly lay her left hand on his shoulder and then slipped both of her arms around his shoulders, and would slowly pull him towards her in an embrace. "Hey... if you have any problems, even if it's with me, just tell me kay. I don't mind." she whispered to him. She held him there for a few seconds in silence...

As that cold breeze blew past, a shiver was sent down Kenzo's back, and it wasn't the wind; It was her gentle touch. The warmth of their bodies being so close kept him warm. The feeling of her arms slipping around his shoulders to welcome him with a warm embrace almost made him lose his mind... Who did she think she was, touching him? Even if he liked it, that doesn't mean it's okay... right? He wanted to say something, or even push her away, but he couldn't think of a good enough reason to. Those plump hidden cheeks soon turned a rosy red as she held him, and spoke. He couldn't help, but to be polite. Seconds past before he decided to speak. His hidden lips parted, and he nodded.

In her heart, she felt a sudden wave of relief as he said that it wasn't her. Ayumi let go of him as she felt a sudden awkwardness. Jesus... what was I doing? she asked herself as she looked at the moon. "Um yeah. Cool then." she murmured. She placed her right hand on top of his head and lightly ruffled his hair. "Good luck twerp. You'll be something big one day." she whispered and stood up. She glanced back at him and smiled before turning away, "You should go home. It's late!" she shouted and waved at him before disappearing into the darkness.

Kenzo smiled, when she disappeared, he fell onto his back with a smile plastered across his face, and tucked his hands behind his head. A man opened the doors to the academy, interrupting Kenzo's daydreaming with a loud yell.

"Are you the brat who was playing with the fire alarm!?!"


And, just like that Kenzo was on his feet, sprinting through the streets of Konoha! The old geezer would dare follow, he still had students in the school. Kenzo was home free! To the Uchiha district!