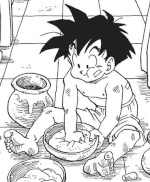 Johan quickly and silently made his way up the stairs that lead to the Kage's chambers. He had made up his mind and was going to travel across the villages, and probably get some training in along the way. The chuunin made it to the door and was about to knock, before he stopped himself. He wasn't sure why, but he felt very very nervous. Maybe it was because he wasn't used to visiting the Kage. Yea, that must have been it. The young boy took a deep breath before willing himself to turn the door knob. Once he done that, Johan pushed to door to make it actually open and peeked his head inside. 'I hope I'm not disturbing him.' he though as a drop of sweat went down the side of his forehead. "Um, sir, do you have a minute?" he asked politely.

His hands started to get sweaty as he kept holding the door knob. Johan wasn't actually going to walk into the room until his leader said he could. The Uzumaki stared at his superior and waited for a response to his small question.

Sitting here alone in his office Kaede couldn't help but feel slightly bored. Nothing of note had happened over the past couple of weeks. Even with many of the villagers busy with preparations he still found it odd that he had heard of nothing going wrong recently. That of course made him quite happy. After all if there was no faults within the village then he must be doing at least a semi-decent job. A yawn escaped his lips and he leant back against his chair. Recently he oversaw the removal of the old chair that was located in this office and had replaced it with a much more comfortable one. He had found that having a nicer chair to sit in made him much happier in general. Though it did have the side effect of making him possibly too comfortable. Many times the man had fallen asleep at his desk, and it seemed that it would be no different today. With his feet up and resting on the desk he shuffled around to make himself comfortable some more. Resting his arms on his stomach he closed his eyes and let himself drift off into a nice nap.

That is he would of done, if not for the disturbance that happened not five seconds later. He heard the sound of the door across the room opening. He didn't open his eyes for a moment, and refused to move for the intruder in his office. Though for the sake of finding out who it was before he accidentally killed one of his villagers because he mistook them for an attacker he opened his eyes. Not that the person in the room could see him do that, after all his eyes were as always covered by a pair of sunglasses. Though he did make a show of turning his head towards the person who entered, a teenager by the looks of it, as they began to speak. Something that Kaede found quite amusing was that the boy had nod actually entered into the room yet, instead opting to stand behind the door with only his head visible. Kaede of course had plenty of time to spare, so he decided he might as well listen to what the boy had to say. "I have time to spare, come in." He accompanied the response with a smile and a small wave of his hand.

A small smile formed on Johan's face as he stepped out from behind the door. He closed it behind him once he fully came into the room and focused back onto his leader. He scratched the back of his head as he tried to think of the right words for his next question. "Well, uh, I wanted to know if I can come out of the village to go out and travel? I've been wondering what it's like out there anyway, so it would be the perfect chance to find out." he told the man. The boy wanted to make the discussion very brief and smooth. However, he wasn't sure if the Kage would even let him go outside the village to simply explore the world. He took his hand from behind his head and shoved both of them into his pockets.

The boy looked around the office, not really used to being in his current position. There actually wasn't much there to look at, it seemed like every other office. A few papers were on the Kage's desk, the boy guessed it was paperwork, and a window with an amazing view of the village. Johan directed his eyes back onto Kaede and waited patiently for what he would say next.

Kaede smiled at the boy's request. It didn't come as a surprise to him that someone of his age would want to go out into the world and explore. of course he wasn't exactly all for the idea, but he didn't really have any reason to stop the boy from doing as he wished. Though it could end up turning into a rather annoying problem if he had a citizen of his village running around causing trouble. Weighing his options for a moment or two he decided he might as well let the boy do as he wishes. "I see no problem with this." He shifted around in his chair, opening a draw from his desk and pulling out a sheet of paper. It took him a few seconds to write down a note. Summed up it was a note stating that the boy had permission to be gallivanting around the world and wasn't in fact a rogue shinobi etc. "Name?" If the boy obliged to give him his name he would write it down on the letter, if he didn't he would just put 'this boy' instead. Signing the letter off he would hold it out for the boy to take. "To prevent problems I request you give a report every few weeks, updating me on your location and whatever else you deem necessary." Should the boy accept the note and leave the room he would give one last warning to the boy. "If I hear any news of trouble being caused by you that will damage the reputation of this village. I will personally hunt you down and deal with you. Now that you are aware of that, have fun on your trip." With a slight wave he would close his eyes and go back to his nap, unless the boy tried to request anything else.

Johan grinned at his superior after getting permission to leave the village and fulfill his wish. He really didn't expect it to be that easy, the boy thought he needed to do a mission or something to prove he can be trusted to go. "Thank you very much! And my name is Johan, sir." he replied, his grin growing even wider. The chuunin walked over to the Kage and took the letter from his hands. He shoved it into his pocket and nodded, basically saying that he would make sure to follow what Kaede told him to do. Johan really didn't mind writing letters back to the village anyway, it would pass time while he was on his journey. 'I really can't wait to head out!' he thought.

Just as Johan turned and made his way to the exit, his ears perked up once he heard Kaede's.. well.. threat. The boy swiftly turned around and nervously laughed. "You can count on me! I'll be sure to make our reputation even better, hehe." he said. He then turned to face the door once more and walked out of the office. It was time to get packing!

[Topic Closed or w.e I guess]