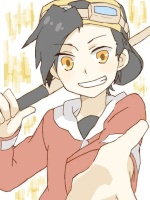 Kojin yawned as he woke up in his bed. He sighed and looked outside his window. He was in the busy part of Sunagakure, sadly, meaning everything and everyone that is noisy comes near to where he lives. Luckily, his apartment was in the shade from a bigger building next door so he wouldn't have to worry about the heat. That made most of the people in the area jealous of him. The boy jumped off his bed and continued to doing his daily morning activities. Only half an hour passed once he was finished. Kojin proceeded to head out the door of his apartment, but not before saying goodbye to Kuname. He walked into the streets and walked towards the training grounds. He would have gone to the caves to train, but he decided against it. He could always go there another time.

He started to jog once he was halfway to the grounds. If he was going to train might as well get a small bit of exercise before he got there. When Kojin finally arrived at the grounds it was surprisingly empty. He had expected at least one or two people to be there, minimum. Oh well, that just meant no one was going to disturb him during his training. He quickly turned his head to the sky to see what time it was. 'I'm guessing it's around.. 9:30 a.m. I better finish by 2 or 3:00' he thought. The genin quickly took of his hoodie and tied it around the post he was near. That way he wouldn't get hot while he was training. Of course, there was still his white short sleeved that was on him. Kojin dropped to the ground and started on some simple push ups.

He easily did 10 and moved onto the same amount of sit-ups. Still, these were only beginning exercises. He had to be fit for what he was going to be training today. A few minutes passed when he finished his sit-ups. 'I think it's time that I start my real training' he thought. Kojin quickly stretches his arms and legs, then started to look around the area. A small smile formed on his face after he saw a giant rock in the area. He quickly went over and went behind the large object. It was at least a whole foot taller than him! "This is perfect!" he said out loud. The boy put his hands out on the rock. He narrowed his eyes and began to push it towards his previous spot. The good thing about this was it was also strength training! Something he lacked greatly since he was focusing on increasing his chakra and speed.

There was also his durability that was an issue. The genin's stamina needed work as well. Long story short, there was a lot of things Kojin needed to work on. Besides, if he was going to get ahead of Yukio and Raijin he had to work super hard and perfect these flaws. The boy continued to push the giant rock until it was a meter away from his hoodie. "Alright, this is good enough" he mumbled. It was in a good enough spot to practice the technique. He ran all the way to the other side of the training grounds, making sure he can still see the rock from where it was. The great move he was going to practice was something many people knew about. It popular almost all around the ninja world, used by many of all ranks. When in use, it made the sound of a thousand chirping birds.

That's right, it was Chidori. Kojin had wanted to master the technique since he was in the academy. It was one of his all time favorite jutsu. Plus all the things you can do with it once it was mastered... it was incredible to him! He had went to the library again after training with Mokuzai and found the move. The genin had learned how to perform the chidori all from the book. After he accomplished this, he was going to conquer the Rasengan! The boy quickly performed the hand signs required and started to concentrate. A small drop of sweat began to form on his brow while he was channeling his chakra to his right hand. Eventually, lightning started to form all around his palm. A small smirk formed on his face when he saw this happening. He continued to concentrate on forming the Chidori.

After a few minutes of doing this task, Kojin had a fully formed Chidori in his hand. "Awesome" he commented. He continued to admire the flow of lightning in his hand. Of course he had tried it out when he first learned the move, but he never got the time to see how it looks. The genin shook himself from his thoughts and focused on the rock in front of him. He crouched down low, ready to charge at the rock. 'Here goes nothing!' he thought. The boy then dashed at full speed toward the large object, dragging his Chidori along with him. He was trying to alter his direction in this training, just to make it easier to use the jutsu. Once he was close enough, the dark haired boy aimed the hand with Chidori at the large structure. From the book, it said this technique was supposed to be as strong as the amount of chakra he had.

If the rock got destroyed, that meant he had a lot of chakra. That was also another positive from this special training of his. Once Kojin's hand had reached the rock, it was done for. The large piece of earth shattered, almost like glass being broken into a million little pieces. The genin stared at the debris in shock. 'I really did that?' he wondered. A large grin started to break out on the boy's face. "Haha! I can't believe I did that!" he exclaimed as he put his fist up in the air. he was positive Yukio and Raijin were going to be surprised when they saw the jutsu. Even his entire team would stare at him in awe. The boy got stuck in a tiny trance. An image of all his friends being proud of him, and his looking at him in envy. The genin smacked his forehead to come out of the small fantasy.

'I still have a long way to go, this is not the time to space out' he thought. Kojin proceeded to look around the training grounds for another large rock. Sadly, there was a drawback to using the technique. Since he didn't have a enough chakra, he could only do 2 blows per day. It frustrated him a bit, but made him determined to get at least 3 blows. His eyes settled on an even bigger rock than the lost. He grinned and walked over to the large structure. He quickly made his way behind the rock and began to push it like he did with the last. Since it was so heavy, it took a larger amount of time to put it in the spot he wanted. Once Kojin had finished the small task, he went back to his previous spot where he did his first Chidori of the day. The black haired boy concentrated his chakra once more.

He was tired from the last blow, but he could continue with the training. It surprisingly took a shorter time to form the jutsu. Maybe it was because he already did it? There was a possibility. More sweat started to form on his forehead. The day was getting very hot, as usual, meaning he couldn't stay out much longer. He didn't want to get a bad sunburn! Kojin charged at the rock at full speed once more. This time, he was moving much more fluidly with the jutsu active. When the boy reached the large rock, it was obliterated just like the other one. The pieces flew all around the area, some of them hitting the genin himself. Still, it didn't completely get destroyed like the last. There was a moderate sized part left of it, only half of the boy's size.

Kojin smirked at his accomplishment. It didn't last long since he collapsed onto his knees. He was breathing very heavily, the sun wasn't helping him either. He gathered up enough strength to reach for his jacket and tie it around his waist. The boy turned his head and cringed at the mess he made. 'Oh well. That isn't such a big problem.. is it? Nah' he thought shaking his head. He found a small spot of shade a building was giving off and slowly paced towards it. He plopped himself down onto the ground and quickly reached for inside his pocket. The genin pulled out a water bottle that was close to being halfway empty. Despite it being a bit warm, Kojin chugged it all down. He choked on it a bit a few times, but continued to drink it. He sighed once he finished it all off.

"I never knew I would be so grateful to Yukio for something" he mumbled with a smile. Since he was done with his training, Kojin rose from his seat in the shade and made his way back home. It was time to take a break for the rest of the day. Besides, he was positive they could just get some other genin to clean up the giant mess. The boy was just to tired and lazy to focus on even bothering to clean anything up. He hoped they didn't assign his team to do the task though, that would be a big problem.