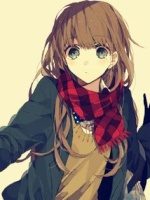 It was a bright morning in Suna. The sun was shining, the birds were chirping, and there wasn’t a cloud in the sky.  A soft breeze blew through the city, cooling the hot, dry air. Civilians chatted with one another on the streets, and children ran about, playing fun little games of tag and hide-and-seek. It was very peaceful; picture perfect, you could say.


A 14 year old girl stood at the entrance to one of the village’s many training grounds. The girl had long, crimson hair that came down to her waist and big, icy blue eyes that seemed to be much like a cats, except they had no pupil at all. The most peculiar thing about this girl, though, was the fact that upon her head were two, very real, soft, white cat ears. The girl also possessed a long, fluffy tail to match. Her name was Kirameki Yokoshimana, and she was a genin of Suna, the Village Hidden in the Sand.


The girl wore a long, soft white shirt that buttoned down the middle and black leggings, which were topped with a short white skirt. On her feet were knee-high heeled black kunochi boots, and upon her head was a white head-band-like cloth, which she used to hide those pesky ears of hers. A forehead protector hung around her neck. This was made of a rectangular metal plate, engraved with Suna’s symbol, sewn into black cloth. The girl wore her hair in low pigtail today, parted down the middle.


Behind Kirameki stood a great Clouded Leopard with yellow eyes. The cat’s fur was white in color with black markings. She came up to about halfway up the girl’s midsection, and was roughly five feet long. Sheathed inside her great paws lay sharp, white claws, and within her jaws were gleaming white teeth. Her entire stature demanded respect, and that respect was sure to be given.


Kirameki walked through the entrance. Looking around, she took in her surroundings. Trees were scattered here and there, and sand littered the ground, as per usual. But something was a bit different from the norm. There was a boy there, and he seemed to be walking toward Kirameki. As she stood and waited for him to come, she studied his looks. He had dark brown hair and green eyes. The boy wore a dark greed long-sleeve shirt and blue jeans, with normal ninja footwear. He had a Sun a forehead protector upon his forehead as well, marking him as a ninja. Judging from his height and such, he was probably around her age, give or take a year or two.


Kirameki fixed he posture as the boy neared. Once he was about three feet away, he stuck out his hand. “Hey, the name’s Kuru. And you are?” he said.


Kirameki Shook his hand and, too, introduced herself, “I’m Kirameki. This here is Yukihana, my clouded leopard friend. You here to train, too?”

Yuru nodded his head. “Sure am; I had just arrived when you got here. You wanna spar a little?” she asked, letting go of her hand.