Megami gasped as the wire cut him! He had dodged the attack but she still nicked him. She immediately withdrew the wires as quickly as possible. He had noticed she was trying and even complimented her for catching on quickly, it showed that she was listening to his words as he spoke to her.. Yet, they weren't finished. Of course Megami had not anticipated the end of this training session so soon. Even though she had the idea, she knew she was not yet prepared to stop, she had to master these wires as soon as possible. Her father was the clan head and she knew he expected only the best out of her.
He had given her another offer. To cut off the sleeves of his robe? Okay she had managed to cut him so this couldn't be impossible. She once again threw the wires out at him aiming towards his sleeve on the right side of his body. She carefully guided the wires like she did before, as though they were just her arm extending out wards, using the other arm as a for of support and guidance. Hewas expecting her to do this so she had to be careful and work fast to try to catch him. 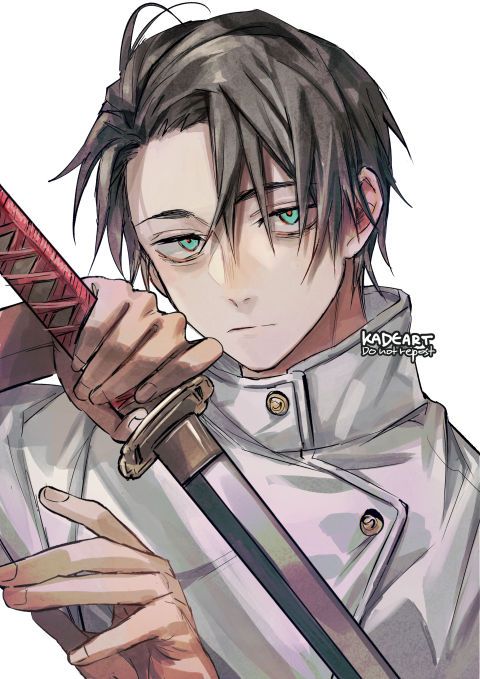 Now the real fun would begin as he looked at his daughter with a smirk. He watched as she sent the wires his way, and only made a single step backwards before using his own wires to block hers. His wires would hit hers as they flew towards him, knocking them from the air as he smiled," come on my dear, im sure you can beat your father at this," truthfully he was having fun as he waited for his daughters next move. He was not going to make this task easy and for the moment he would simply do what his father did to him.

As Megami listened to her fathers words she actually became intimidated! She was trying her best! She was working very hard! Maybe she could try a little harder. He had just so carelessly and easily knocked her wires to the ground. It looked as though she would have to try a little harder, after all her father had mastered these wires already. She took a deep breathe and once again aimed the wires towards his right side. The good thing about these wires being just an extension of her is that she could aim them one way and then at the last minute, move them. Just like she would her real arms.
As the wires went towards his right sleeve, she made sure to use the one arm to attack and the second to guide, when they were only eight inches from his arm she immediately pulled the attack to the left. She was going for the left sleeve this time. Maybe the attack would work. She even had to admit this was a good idea for an attack, Fake an attack for a distraction then when they are distracted go for the  real one! She was finally getting very comfortable with the wires.

"She is getting the hang of this faster than I thought she would, who knew that she would actually be able to do this. Well looks like I will be owing her a reward soon," Nakara thought to his self as he moved to try to block the attack. Moving his left hand up, the wires would straighten to block the attack although he did not see the outcome to be like this. Soon he would see his sleeve fly from his arm and he was actually surprised as he watched the black sleeve shread into nothing as he chuckled," One down and one to go Megami, your doing well now lets see what you do for this last sleeve," he smiled widened as he jumped back and waited.

Megami giggled as the sleeve came off and was shredded! "Got you!" She said still giggling as the wires retracted to her. Her face beamed brightly with a smile as her father said he was proud of her and how well she was doing. "I am trying daddy, I promised you I would listen and try my hardest and be as responsible as I could be. I may be a kid but I can be responsible." She said staring at him. He was ready to see her try to get the other sleeve. She watched as he jumped back and prepared for her attack.
"Ready?" She asked as she shook her arms a little as though it would help. Probably not but she wanted to try to loosen her muscles a little to get more fluid movement. She couldn't fake this time, but she could aim for his face so he would block making it possible for her to move towards the other sleeve. She decided to aim for his stomach instead this way he would block and she would just move to the left. Throwing back out the wires she aimed right for his midsection. If he attempts to block she will take the wires and move them when they are a mere six inches from the body, the the un-shredded sleeve.

Nakara could see the determination that she showed when they sparred and he knew he was going to have his hands full, after all she was a Kuoga and like all Kuoga their determination was their greatest weapon. As she asked was he ready, he smiled and waved his hand," Bring it Megami," his body was completely relaxed as he watched her attack carefully. He was using the basic manipulation of the wires this whole time, but now he would show her the next level of what she could learn. His fingers would now control the wires instead, utilizing three different methods. The left was used to coordinate, while the right attacked but with the fingers controlling the wires and their trajectory he would now move them like snakes, successfully blocking her attacks while he continued to move slowly, one foot moving backwards as his eyes focused on her movements.

Megami growled a low growl. It was kind of frustrating for her, but she watched his hand movements. In her eyes she could tell he was using his fingers. Where as she was not advanced enough to yet do this, she could tell he was doing it to block her movements. Maybe, just maybe she could throw the wires and manipulate them to go around the blocked attacks. This was going to be a stretch for Megami, but she had to make an attempt anyways. She knew she was learning from her mistakes. Now she would aim at the sleeve and as he blocked she would attempt to go around the block.
She threw the wires out this time and moved her hand in just the right position to move around if she had to. This was all about timing and whether or not she could do it. She guided the wires straight towards the sleeve, if her father decided to block, then Megami would use the hand guiding the wires and lead the wires around to the side of the block and attempt to twist the wires around the slice the sleeve off. If she managed, his sleeve would be shredded and Megamis goal would be accomplished, now she had to wait and see.

It would seem that the time had come, it was good to see that his own daughter had the potential to surpass him someday, although they both were young she had shown so much promise. His body continued to move, block what he could but he felt the fibers and cloth of his sleeves soon begin to rip from his body, he stopped the last of the sleeve from coming off as he deflected the wires and jumped back," whew...that was close, but then again," looking down to his sleeve as he peeled it off," a win is a win Megami. Congratulations you did it," walking over to her he would hug her tightly. From this angle she could see the scars on his arms from his own training, the scars spanning his arms and disappearing under his clothes.

Megami could hear his words but all she could see were the scars on his arms as he hugged her. She held him close for a second returning his hug and she had small tears coming out of her eyes. "Your arms daddy." She said as she sniffled a little feeling sorry for her father. He may be a very strong Shinobi and head of a clan, but he was also her father and she didn't like knowing if he was hurt or in pain. Seeing the scars made her realize at some point he had been hurt. She wiped away the tears and smiled at the fact he was proud of her.
"I learned from watching you. You were my teacher and inspiration." Megami smiled looking at him with a sense of pride. He was proud of her and she had accomplished what needed to be done. "I hope to someday be as good as you and make you proud of me daddy!" Megami said smiling at him still. "Mom has always said how powerful and strong you are. I want to be like you." Megami said as she looked down at the wires that were wrapped around her arms.

Nakara looked down at his arms for a moment before wiping the tears from her face," This was how my training went...except you grandpa was more... hands on with me than I was with you. Its okay because I learned how to protect myself further, but I don't want the same fate for you," kissing her forehead he would rub her head gently. Hearing that she was inspired by him and used his movements as her basis, he was drawn to tears as he hugged her and laughed," Making your dad cry is not good Megami, but you did really well and after you become genin we will continue your training so that you can learn more of the clan techniques, now for your reward we are going to out to eat now come on," as he began to walk off.