Meeting the kage for the first time (NK,private) 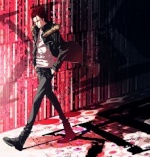 Meeting the kage for the first time (NK,private)

Kaim stood inside the kazekage chambers, looking around he was waiting for a important member of the village. He heard some stories about the kazekage but he was never able to meet him. But today he was getting ready to meet the most important piece of the village. Standing there with his long dark jacket on with a white t-shirt, and gray pants, with his light gray and black boots. With his left hand that was relaxing on his katana which was located on the left side of his stomach and a strap the help the weapon holder so it could attache to his stomach.

Kaim looked around waiting for the kage to show up.

The moment the boy tries to enter the Kazekage chambers, he is stopped by two Sunagakure no Sato ANBU. An ANBU standing at each side of the door."Halt! What business do you have with the all great punchy one!" The ANBU to the right of the boy says, his left hand sliding down to rest upon his Katana's hilt, his masked visage trained upon Kaim.

"Who's out there!?" A loud and booming voice says from inside the chambers "N-no one lord Kazekag- .... I mean Koroshi.." The ANBU to the left of Kaim's position responds, a slight stutter from fear of being forced into training with the newly instated Kazekage of Sunagakure no Sato mixed with his voice.

Kaim would hear two voices asking what 'bushiness' he had here?" Where first off my damn name is Kaim hyuuga and that's not ow you talk to a member of this village! now I'm here cause I was assign to come meet the kazekage now if ya don't mind let me go speak to him for a while?" Kaim asked as he got ready to pull his katana if needed.

"As ANBU of the sand we have the right to question any and all people who wish to see lord Kazekage, for it is our job to guard him." The ANBU to the right of the foolish boy states with a cold tone to his voice for the boys out disrespectfully attitude.

When the boy goes for his blade the ANBU to his left quickly pulls out his katana from its sheath with his right hand grasping the hilt, in one swift pulling motion he places the sharp blade against the boys throat ready to slice his head off for the slightest movement. "Make one more move and your dead brat" The ANBU says while pushing the blade harder against the boys neck, not enough to cut him but enough to hurt the boy to show that he means business.

(Where are you thinking Irou? First off who would send a genin to see the Kazekage in the first place? Second these are ANBU, your higher ups. You give them respect, they don't have to show you any. Third why the hell would you try to grab your katana when you are asking to see the Kage? You are pretty much talking to the secret service in charge of guarding the president, and you try to grab a sword? They would've killed you right there on the spot. Think before you post.)

Kaim saw the ANBU that seemed to get piss off, watching as the katana went against his neck," Okay guys let's just calm down everybody take a deep breath, now the reason I'm really here is to talk with the kage. I figure I should meet him know this is a all of sudden pop up, just thought I'll come chat with the kazekage for a while" Kaim then removed his left hand from the katana." Now just relax brother get off me, I'm not going to pull that katana out! I was just placing my hand on the weapon no need to get worried damn it" Kaim then looked up at the ANBU smiling," Let me go dude, also let me go talk to young koroshi I have some real important bushiness to tell him"

Freeing his self kaim turned around looking at ANBU." Now what the hell is wrong with you? I understand you a ANBU but show some damn respect to other ninjas inside this village. I bet every ninja that walked inside here you never did anything to them, so now guys thank you for messing up my jacket just got this damn thing now it's mess up."

Kaim dust his clothing off and he looked at the door where koroshi was behind," So you going to come out or what?" Kaim asked as he waited for a reply from ether the ANBU or the kaze kage Koroshi.

(OOC: I 'm dead in another topic so yeah)

The moment the foolish boy acts tries to free himself without given confirmation, the ANBU thrust his sword forward slicing the boys throat open, causing his blood to free fall from his body, soaking and staining the floor with his crimson red blood, the boy killed if no other actions are taken, the blade due to already being against his neck however has but the simplest of movements cause the slitting of the boys throat.

Should the kill go through, the ANBU on the right sighs and picks up the body, dashing out of the way of the door. Quickly pulling out a jar with green liquid in side from his ninja pouch, he would then rip out the boys eyes placing them within the jar to keep them fresh, then he pulls out a box big enough to put the jar in from his ninja pouch, putting the jar inside. While he is doing that the other ANBU quickly cleans off his sword, which is followed by him rolling up the rug that was laying in front of the door quickly throwing it out of the window so Koroshi doesn't see the blood.

"What's going on out here!?" The new Kazekage says while opening the door, with further inspection of the young Kage he is only wearing his pants and is drenched in sweat, holding a 1000 lb hand weight in his left hand that he was using to do his usually 10,000 curls before heading off to start his training.

"Nothing Lord Kazekage.." The ANBU says after turning around trying to hide the fact that he just threw a blood soaked rug out the window "We were just uhh" The ANBU says as he searches his brain for a reasonable excuses for all of the commotion, but he is saved by the other ANBU coming from behind the corner with a box in hand "Lord Kazekag- I mean Koroshi, some kid dropped off a package for you" The ANBU says while handing Koroshi the box "Oh wow I must be doing a good job as kage if people are already sending me presents!" Koroshi says with a smile as he begins to open the box and pull out the jar, upon seeing a pair of floating eyes in a jar Koroshi makes a disgusted face "What kind of sick fuck sends people eyes!? This is a sick, sick fucking world we are living in if we can't even trust the mail system anymore!" Koroshi says as he begin to rant and rave about getting sent human eyes "I mean who even cares about normal huma-..." Koroshi says but stops when he sees that they are pure white eyes wondering if they are that of the Hyuuga's Byakugan, realizing that his brother Viper always talked about having every type of clan eye so he could rule the world when they were younger "Di-did Viper send me these?! That sick son of a bitch!" Koroshi says while stomping off back into his chambers and to his desk,he then opens up a drawer, placing the jar inside it "No one can know about this ok?" Koroshi says while locking the drawer and looking over at his ANBU "Know about what sir?" The ANBU who handed him the box says trying give Koroshi the hint that he will not say anything "You know the" Koroshi says while knocking on the desk with his right hand to try and remind the ANBU about whats hidden in his drawer "I have no idea what your talking about sir, and why are you knocking on your desk?" The ANBU says trying give more hints on that he will keep the secret "The mother fucking eyes in a jar in my drawer!" Koroshi says getting frustrated thinking that the ANBU actually forgot about him getting eyes in a drawer. "..... Sir I was trying to reassure you that I won't tell any body by acting as if I didn't see anything ...." The ANBU says, trying to explain what it is he was doing. "Then why the hell didn't you say so!?" Koroshi says acting as if it was the ANBU was the one who was being dumb here, then with a smile on his face knowing that the ANBU are not gonna tell anyone about the eyes Koroshi jumps out the window of his chambers, and begins to hop from one building to the other heading toward the training field.

(Exit, Topic closed, Kaim is dead and Koroshi now has a pair of Hyuga in a jar in his drawer. end word count 1003 words.)

(Side note Kaim was in this topic first there for if he joined any topic after this it is voided for him dying here.)