Prim saw the thing coming at her. Her eyes widened as she managed to dodge it, she looked around quickly and saw Senba as he approached her drawing his katana. She smiled as she drew her sharingan ninjato. As she prepared to fight him she realized that Senba is definitely not the proper rank he should be, this kid should be a Jounin with his fighting skill. She was feeling more honored to be his squad leader than anything at this point.
"So you want to do this now? Been a while for me, so be easy!" Prim said smarting off to him. This spar was getting more entertaining for her. She could feel the Nibi hissing at her and telling her to use him still. She continued to ignore the Nibi as she watched Senba closely. She was better at defense and protecting herself than actually fighting with her weapons. This would be a learning experience for her as well. As usual she had decided to let him go first, to see how he would wield his katana. He was excellent at jutsus and now she would see his weaponry. "You go first Senba, come at me!" Prim said as she stared at him with her red eyes. 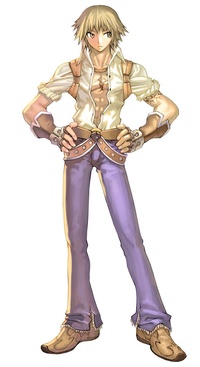 Senba thought to himself "She must not be much for close quarters combat either. She really is not wearing much, and I would just think to aim for a
shirt to cut it or something." He looked at her and winked. He put his left foot out in front and lowered his body down a bit. Senba, pushing off of his left foot, dashed forward to prim and aimed for her blade. He did not want to hurt her. If she did not dodge the blade would crash together, and then it would be her turn to do something.

As Senba came at her with the sword Prim held hers in a defensive stance as the swords collided. Because of his strength, Senba almost knocked Prim backwards.Holding her position She reached out with her left foot to kick Senba in the right knee. If the move successfully goes through it should distract him long enough for Prim to body flicker behind him and hold her sword against his neck. If not Prim will simply push him back with her sword against his as she moves forward. Prim had not used her weapons in sometime, even though she was a little rusty she was not about to give up. Her role as a squad leader wouldn't let her.

Senba noticed as Prim tried to kick in his right knee. He pushed the blade harder against hers pushing himself back. The kick was not successful and Senba was now a bit away from her. He sheathed his sword, and smiled at her. He said "Let us call it a day shall we." He smiled gave her a hug and went on home.

After Prim had failed to kick in his knee she felt her body slide backwards as he pushed his blade against hers. There was no way around it, she definitely knew that if they had fought, neither would win at this point. They matched each other in strength. As he sheathed his sword and hugged her, Prim kissed his cheek as she slightly blushed. "Later Senba." She said as she herself headed to check on something. No other members to his squad? She swore when she was assigned his squad that their were others to. Prim checked her equipment pouch, maybe she had written the information down. According tho the paper there were two other members. Two other Uchihas. Exactly how big was her clan again? Prim shrugged and called it a day, she would hold a squad meeting tomorrow. Right now, she had Senba on her mind and she had to find a way to quit blushing! The Nibi didn't seem to agree with her feelings and kept trying to fill her mind with hatred, feeling she knew she could use in battles and on missions, for now she pushed its influence as far away as possible until she would need it.